Bring Out the Dawgz – 15 February 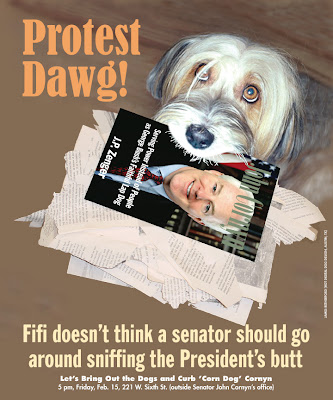 John Cornyn is rated by the non-partisan National Journal as the fourth most conservative US senator. The Dallas Morning News reports that he has always been a reliable ally of George W. Bush from the days when Bush was governor of Texas.

Among his largest contributors are J. P. Morgan Chase, Exxon Mobil and the Bass Brothers Enterprises (oil money, classmates and long time financiers of Bush). These big contributors get good value for their money. Cornyn voted against including oil and gas smokestacks in mercury regulations; against factoring global warming into federal project planning; against banning drilling in the Arctic National Wildlife Refuge; against reducing oil usage by 40%, rather than by 5%; against removing oil and gas exploration subsidies, despite the fact that the oil industry was making record profits year after year.

Cornyn is described by MSN Money as one of “Big Oil’s ten favorite members of Congress.”

His record also reflects a slavish subservience to corporate interests in every area. This is reflected in appraisals of his voting record by many civic organizations.

U.S. Senator John Cornyn
Barking Points:
Senator Cornyn’s voting record demonstrates a frightening disregard for the lives and welfare not only of Americans, but of people throughout the world. The senator has a history of disregarding his constituents, and voting lock-step with President Bush, even as the President and his agenda have become overwhelmingly unpopular. As he runs for re-election in 2008, Senator Cornyn will struggle to defend his record:

On the war in Iraq: five years after the invasion, almost 4,000 U.S. soldiers and over 655,000 Iraqis have died, and a majority of Americans polled are ready to bring our troops home. Yet, Sen. Cornyn continues to vote for war funding, and resists any legislation which would set a timetable for withdrawal.

On torture: Sen. Cornyn was one of only nine senators who, in Oct. 2005, voted against the McCain amendment, which banned the use of cruel, inhuman or degrading treatment or punishment against anyone in US government custody.

On children’s health insurance: In Aug. 2007 Sen. Cornyn voted with the minority against expansion of the State Children’s Insurance Program to cover 9 million currently uninsured children.

On domestic spying: Also in Aug. 2007 Sen. Cornyn voted for the “Protect America Act” which, likely in violation of the 4th amendment, allows U.S. intelligence officials to monitor, without a warrant, ‘suspicious’ communication originating inside the U.S.*