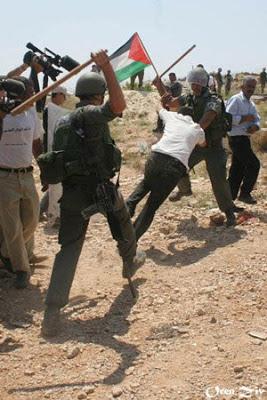 They Want Their Land

The Palestinian village of Bil’in in Israel’s Occupied West Bank has launched a lawsuit against two Canadian construction companies accusing them of committing war crimes by building houses in the area.

In a lawsuit filed in Quebec Superior Court Monday, the village claims that the companies are acting as an agent of the state of Israel. It wants $2-million in punitive damages, as well as an immediate order from the Canadian court that would stop construction. If the order is successful, Bil’in will petition the Israeli Court to enforce it in the West Bank.

“What we’re endeavouring to do is quite unprecedented in Canada. We hope the Canadian court will take jurisdiction over this Canadian company that’s registered to do business in Quebec but is carrying on business in the Middle East on the occupied territories,” Mark Arnold, Canadian counsel to Bil’in, said yesterday.

Bil’in — a flashpoint in the Middle East conflict that has been the site of numerous protests, including one earlier this week — alleges that Green Park International Inc. and Green Mount International Inc., both registered corporations in Quebec, are building illegally on lands under the jurisdiction of the village.

The suit also alleges that the companies are marketing and selling condominium units to Israeli civilians, “thereby creating a new dense settlement neighbourhood on the lands of the Village of Bil’in. In so doing, the defendants are aiding, abetting, assisting and conspiring with the State of Israel in carrying out an illegal purpose.”

Bil’in insists that its land and the companies are subject to international law because the West Bank is occupied territory from the Middle East war of 1967. The claim points to the Rome Statute of the International Criminal Court, which states that war crimes include a nation transferring its civilian population into territory that it has occupied as a result of war.

“It has to do with what appears to be the policy of the government of Israel, which is to populate the occupied territory, former Palestinian land, with the population of Israel. That is contrary to international law, and that’s really the crux of this case,” Mr. Arnold said.

“This particular village is passionate about the land that they say belongs to them historically. … They say [the construction] amounts to a war crime. They don’t want any money — they want their land back. And as an afterthought, yes, they would like the wrongdoer to be punished with a financial punitive award.”

“They plead that the company has done this both as an agent of the state of Israel and on their own behalf. If they’ve done it as an agent of the state of Israel, they may run into a sovereign state immunity problem: you can’t sue states or other agencies in Canadian court. But if it’s [building on its own behalf ], then it’s not a violation of the Geneva Convention. Private companies operating in the market are not addressed by the Geneva Convention. They may be in a legal Catch-22.”

Prof. Morgan, who is past president of the Canadian Jewish Congress, argued that the village may not be the right party to bring a claim: “I don’t think these are village lands, these are Jordanian crown lands and they’re now taken over by the Israeli military administration.”

This entry was posted in RagBlog and tagged Capitalism, Palestine. Bookmark the permalink.