Britain: The Resurgence of the Student Occupation 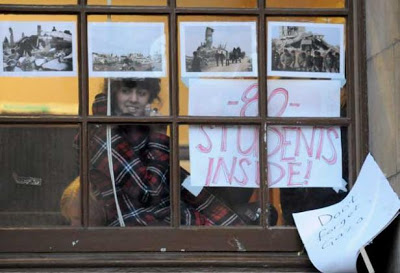 Oxford students demand the university condemns Israel’s attack on Gaza. Photo: Rex.
Students are revolting: The spirit of ’68 is reawakening
By Emily Dugan

Campus sit-ins began as a response to the Gaza attacks, but unrest is already spilling over to other issues.

They are the iPod generation of students: politically apathetic, absorbed by selfish consumerism, dedicated to a few years of hedonism before they land a lucrative job in the City. Not any more. A seismic change is taking place in British universities.

Around the UK, thousands of students have occupied lecture theatres, offices and other buildings at more than 20 universities in sit-down protests. It seems that the spirit of 1968 has returned to the campus.

While it was the situation in Gaza that triggered this mass protest, the beginnings of political enthusiasm have already spread to other issues.

John Rose, one of the original London School of Economics (LSE) students to mount the barricades alongside Tariq Ali in 1968, spent last week giving lectures on the situation in Gaza at 12 of the occupations.

“This is something different to anything we’ve seen for a long time,” he said. “There is genuine fury at what Israel did.

“I think it’s highly likely that this year will see more student action. What’s interesting is the nervousness of vice chancellors and their willingness to concede demands; it indicates this is something that could well turn into [another] ’68.”

Among the demands of students are disinvestment in the arms trade; the promise to provide scholarships for Palestinian students; a pledge to send books and unused computers to Palestine; and to condemn Israeli attacks on Gaza.

Technology has set these actions apart from those of previous generations, allowing a national momentum to grow with incredible speed. Through the linking up of internet blogs, news of successes spread quickly and protests grew nationwide.

Just three weeks after the first sit-in at SOAS, students gathered yesterday at Birkbeck College to draw up a national strategy. The meeting featured speeches from leaders in the Stop the War movement, such as Tony Benn, George Galloway MP and Jeremy Corbyn MP. There has also been an Early Day Motion tabled in Parliament in support of campus activism.

At the end of the month students from across the country will gather for a national demonstration calling for the abolition of tuition fees, an event that organisers say has rocketed in size following the success of the occupations over Gaza.

Vice chancellors and principals have been brought to the negotiating table and – in the majority of universities – bowed to at least one of the demands. The students’ success means that now there is a new round of protests. On Wednesday two new occupations began at Strathclyde and Manchester universities, and on Friday night students at the University of Glasgow also launched a sit-in.

Emily Dreyfus, a 21-year-old political activist in her third year of reading classics at Oxford, was one of around 80 students to occupy the historic Bodleian library building in the city and demand that the university issue a statement condemning the Gaza attacks and disinvest from the arms trade. She said: “I found Oxford politically very dead when I arrived, but it’s completely different now. There seem to be more and more people talking about politics, which is so exciting. It’s really been aided by the communication tools we’ve got, things like Facebook.”

Wes Streeting, the president of the National Union of Students, said: “What we’ve seen over the Gaza issue is a resurgence of a particular type of protest: the occupation. It’s a long time since we’ve seen student occupations on such a scale. It’s about time we got the student movement going again and had an impact.”

Establishments that have not previously been known for their activism have also become involved. Fran Legg was one of several students to set up the first Stop the War Coalition at Queen Mary, a research-focused university in London, a month ago. Now they are inundated with interest.

“Action on this scale among students hasn’t been seen since the Sixties and Seventies,” she said.

“This is going to go down in history as a new round of student mobilisation and it will set a precedent. Gaza is the main issue at the moment, but we’re looking beyond the occupation; we’re viewing it as a springboard for other protests and to set up a committee to make sure the university only invests ethically.”

As the first generation of students to pay substantial direct fees to universities, their negotiating power has also been strengthened. Their concern over their college’s investments have been given new legitimacy because it is partly their money.

Ms Legg said: “For the first time, you’ve got students getting principals to the negotiation table, saying they don’t want their tuition fees funding war. Everybody wants to know where their money is going.”

The activist: ‘Students will see they can take action’

“We’ve been occupying the university since Wednesday. More than 500 people came to an emergency Students’ Union meeting and we took the vice chancellor’s administration block that afternoon. Israel’s assault on Gaza made people angry, and we heard about the occupations at other universities through blogs. This is the biggest student campaign we’ve had and it’s also the most wide-reaching. We’ll stay until the university lets us meet with the vice chancellor. I think students will see they can take action on more issues, such as the war in Iraq and Afghanistan and the education system; the Government’s refusal to stop the marketisation of education has provoked a lot of anger.”

John Rose, 63, former student organiser at the London School of Economics in 1968; now a lecturer and author on the Middle East

“I arrived at the LSE in ’66 as an extremely naive liberal student and I left in ’69 as a revolutionary socialist. It changed our lives. I was one of the student organisers with Tariq Ali and attended all the demonstrations and occupations. We did think a revolution was coming; we thought mass action of students might overthrow capitalism and bring genuine equality. It took us some time to realise that wasn’t going to happen.

“It wasn’t just about rioting and having fun, it was political argument that probed all the assumptions about the world. It was a highly intense period and the memory stays powerfully with anyone involved; it’s the memory of those times that has kept me going.

“It was a feeling of fantastic elation: we began to realise that mass action could change things. Once it started, we developed a taste for it and began to consider mass activity as a way of doing politics, which is what’s happening now. People are fed up with bankers, politicians and elite institutions. Hundreds of us thought the revolution was coming in ’69, but maybe the revolution is coming now.”

This entry was posted in RagBlog and tagged Great Britain, Political Protest, Sixties. Bookmark the permalink.

1 Response to Britain: The Resurgence of the Student Occupation