Brooke Jarvis : A Tale of Carmaggedon 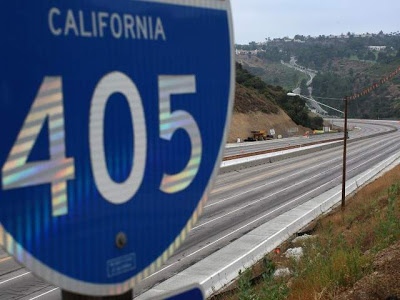 One of the busiest freeways in California, the 405, stands vacant during “Carmaggedon.” Photo from Getty Images.
A tale of Carmaggedon:
The cyclists who beat an airplane


During Los Angeles’ freeway-free weekend, little went quite as expected.

The city closed 10 miles of the 405, a heavily congested freeway that typically handles 500,000 vehicles each day, so it could demolish an overpass bridge. Traffic was predicted to be spectacular. City officials — and, at their request, celebrities — issued dire warnings of a coming “Carmaggedon” — a word that sums up just how thoroughly people expected L.A. to unravel without the freeway.

In response, JetBlue offered a special deal: $4 flights from Burbank to Long Beach. At under 40 miles, it was the shortest flight route the airline had ever offered.

The flights sold out in three hours.

Flying? Across L.A.? A group of cyclists decided to call attention to more sensible transit possibilities by issuing a modern-day John Henry challenge: on their bikes, they would beat the plane to the other side of the city.

And they did. The cyclists, part of a group called Wolfpack Hustle, made the ride in an hour and 35 minutes. Another member of the group drove to the airport, arrived the requisite hour early, waited in the security line, boarded the plane, landed, and took a cab (which apparently got lost) to the finish line — arriving more than an hour after the cyclists, and after a challenger who made the trip by public transit and walking, and another who rollerbladed it.

That’s right: On Sunday, an airplane got its butt kicked by bicycles, metro rail, and a pair of rollerblades.

Of course, the flight was a publicity stunt, not a serious suggestion about city-scale alternatives to car supremacy. The sheer ridiculousness of using an airplane to solve a problem caused by too many cars is pretty obvious, especially during this summer that has so dramatized the dangers of a warming climate. (Cars, of course, are about the least climate-friendly way to get around a city — or they were, in the innocent days before the advent of intracity plane travel.) 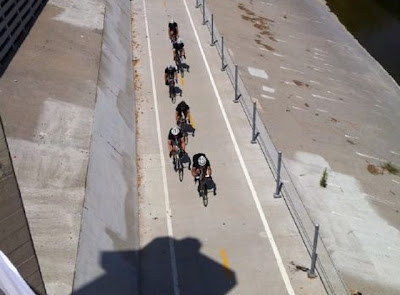 And the winner! Wolfpack Hustle on the Tour de Carmageddon. Photo by Waltarrrr via Yfrog / laist.
But the flights did symbolize the conventional wisdom that Los Angeles just can’t function without its current car-centric transportation infrastructure.

In the end, though, Carmaggedon didn’t so much bear out the myth as turn it on its head. Los Angeles residents figured out, at least for the weekend, how to live without the freeway. Some took to bikes and public transit; some simply stayed closer to home. Roads, in fact, were clearer than usual, and both the mayor and The New York Times revised the apocalyptic moniker, calling the weekend more of a “Carmaheaven.”

“It’s like we live in a small town today,” Bel-Air resident Michele Cohn told the Los Angeles Times. “I wish it were like this all the time.”

More than a few in Los Angeles, it seems, were left wondering if it could be — if the congested car city could become a place where people could live closer to their jobs, where most trips could be made on bikes and transit, and where a car-free weekend would be a regular possibility, not a reason for panic.

“Today was perfect,” Wolfpack Hustle wrote on its Twitter feed. “The ride was beautiful and scenic, our race inspired people to rollerskate, to take trains, to walk to the finish. Meanwhile… our politicians and police cowered and bit their nails, telling people to stay home and avoid this beautiful weekend.”

[Brooke Jarvis is web editor for YES! Magazine, a national, nonprofit media organization that fuses powerful ideas with practical actions. This article was first published at Yes! Magazine and was distributed by CommonDreams.]

This entry was posted in RagBlog and tagged Carmaggedon, Los Angeles, Transportation. Bookmark the permalink.

2 Responses to Brooke Jarvis : A Tale of Carmaggedon