Bryan Farrell : The Eyes of Texas Are Upon You, Keystone XL 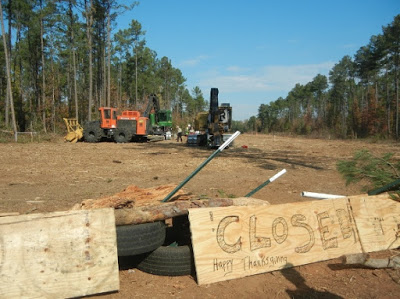 Four activists are locked down to construction equipment on a recently clearcut easement leased by Keystone XL pipeline builders TransCanada. Inset photos below show local residents supporting the demonstrators and treesitters in the 50-foot pines at the rural East Texas site. Photos by Bryan Farrell / Waging Nonviolence.
Hey, Keystone XL:
The eyes of Texas are upon you

As the sheriff’s deputies finally moved in on the tree-sitters, you could hear them referring to their targets — as opposed to the Canadian corporation on whose behalf they were interceding — as ‘the foreigners.’

NACOGDOCHES, Texas — “CLOSED. Happy Thanksgiving,” read a handwritten plywood sign propped against a makeshift tire barrier outside a work site for the Keystone XL pipeline in rural East Texas. For those who had come to protest and engage in civil disobedience against the pipeline’s construction, the message made clear that their visit was expected.

It was still just the Monday before Thanksgiving, making for a surprisingly early break for a project that has been fast-tracked at practically every level of government. Such enthusiasm for a U.S. holiday hardly seemed right for TransCanada, the Calgary-based energy corporation building the pipeline.

Not that the activists’ presence was any kind of secret. Tar Sands Blockade, the campaign seeking to stop the pipeline connecting Alberta’s tar sands to Texas’s oil refineries and shipping ports, had announced the day’s mass action a week earlier.

The only real surprises were the two locations that the campaign would be targeting, which the organizers kept hidden — even to fellow participants — right up until the last minute.

Their goal was to shut down construction for a day. The real imperative, however, was directing media attention to a pipeline that poses a significant danger to the health of the local community, as well as to the global climate.

Four activists came prepared to lock themselves to construction equipment, and despite the closure of the site by TransCanada, they went ahead as planned. Another dozen or so supporters — including photographers, videographers, live-bloggers, medics, and spokespeople — waited nearby for the police. Having arrived shortly after 5 a.m. in order to preempt the workers who never came, they ended up waiting for a long time.

Among these supporters was an elderly couple from Iowa. Two days earlier, in time to take part in Sunday’s direct action training, they had driven nearly 16 hours to Nacogdoches — a small town in the Texas Forest Country that advertises itself as “the oldest town in Texas.” Having already been arrested outside the White House at last year’s Tar Sands Action, they were ready to do it again. But five hours of waiting wore their patience thin.

“We want some action!” said 76-year-old Ann Christenson as she leaned on a cane, which she admitted was more for show than for balance. 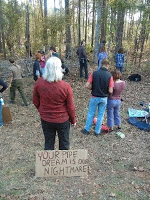 Although she and her husband did not end up getting arrested, plenty of action followed. The local police just needed time to come up with a plan of attack. First, they pepper-sprayed the four people locked to the construction equipment, hoping the discomfort would force them to disconnect themselves. When that didn’t work, they set about dismantling the lockboxes made of PVC pipes and a bolt in the middle by which the protesters were linked to one another in pairs.

I cringed as I saw them do this to the one I’d gotten to know the night before, a 23-year-old named Gill. Before arriving at the Tar Sands Blockade, he had been backpacking around the country, hitching rides on freight trains.

Once broken apart, the four protesters were immediately cuffed and dragged into a police van. Onlookers pleaded with the police to give the arrestees water, as they were not only nearing dehydration from being out in the hot Texas sun, but the pepper spray had also left their faces a mucousy mess. The police, however, remained indifferent, which only further angered the onlookers, who began shouting and cursing.

Meanwhile, a few Texans belted out the University of Texas alma mater: “The eyes of Texas are upon you,” they sang.

More reporters and TV news cameras started arriving. Local preachers came to watch. For them it was an opportunity to save souls — although they seemed far more worried about those of the activists than those of the police.

At a different work site several miles away, three other Tar Sands Blockade activists had deployed into the trees. This was the result of a long night’s work that involved rigging platforms in the tall pines with support lines connecting them to the heavy equipment below. The contraptions forced workers to choose between halting construction or risking the activists’ lives.

Seattle-based filmmaker Rebecca Rodriguez, who is working on a project that involves walking the entire 1,700-mile length of the pipeline, spent the night in the woods documenting their efforts. “They were so organized, so disciplined,” she said. “I have such a newfound respect for tree-sitting.”

Rodriguez described how they spent hours in the cold, dark woods getting everything set up. The tree-sitters would slowly make their way up, securing their positions with rope, and sometimes slipping down along the way.

By daybreak they were all in place, and in this case TransCanada was taken by surprise. A worker showed up and quickly called the county sheriff, whose officers arrived and threatened to cut the activists’ life-lines before retreating to plan their response.

When I asked Alex Lundberg, a longtime Earth First! activist and trainer who helped set up the tree-sit, how much planning went into it, a smile showed out from under his bushy beard. “None,” he said. His answer, however, spoke not to a lack of preparation but to just how well they knew what they were doing. For two months already, Tar Sands Blockade had been conducting an extended tree-sit against the pipeline in another part of the state.

Tar Sands Blockade, Lundberg explained to me two days earlier, was initially conceived of as just a one-off day of action in August to show solidarity with the pipeline’s local opponents and the broader climate justice movement. But then organizers reached out to direct action trainers like him for advice. “We don’t just do things for one day” was how he more or less put it.

With their invitation, the organizers opened their fight to a whole network of environmental activists, who came and didn’t leave. Lundberg, for instance, had been camping out for three months before spending his first night indoors a week earlier.

The Texans, in particular, who choose to resist the pipeline do it at great risk.

For locals like Vicki Baggett, who was among the founders of Nacogdoches STOP Tar Sands Oil Pipeline, the prospect of working with these activists from outside was not appealing at first, even as someone who had devoted years to environmental issues.

“I wasn’t really sure that I could support them,” she said. “They seemed a little far out for me, but the more I spoke with them and got to understand what they were doing and understand how it fits into what we’ve done, it is the logical next step. Now I’m like their biggest supporter.” 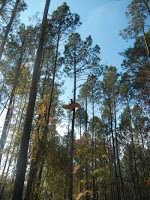 The main core of blockaders have done their best to reach out to locals by attending church services and speaking in classrooms. But many still dismiss them, according to Baggett, as “just those crazy kids who don’t have anything else to do.” She blames the media for preventing her neighbors from seeing what she sees, that “they’re the most passionate, committed people I’ve ever met.”

As the sheriff’s deputies finally moved in on the tree-sitters, you could hear them referring to their targets — as opposed to the Canadian corporation on whose behalf they were interceding — as “the foreigners.” But one of the tree-sitters was 21-year-old Austin-native Lizzy Alvarado, who attends the state university in Nacogdoches.

As protesters tried to block a truck carrying a cherry picker that would eventually remove the sitters from their perch, the deputies pepper-sprayed two local residents: 75-year-old great grandmother Jeanette Singleton and 22-year-old Jordan Johnson, whose family has been raising chickens in East Texas for generations.

The Texans, in particular, who choose to resist the pipeline do it at great risk. Many landowners who were forced into leasing parts of their property to TransCanada through eminent domain have been threatened with lawsuits and effectively silenced as a result. Others fear being ostracized by their communities. They have to choose their moments of dissension carefully, and they’re thankful for the outside support to help them do so.

Over the last week, also, there have been more than 40 solidarity actions worldwide, with the largest being led by 350.org in Washington, D.C. Several thousand people rallied outside the White House and called on President Obama to reject the permit for the Keystone XL’s northern segment, which would run from Alberta to Nebraska. Even this show of support, however, feels to some in Texas like abandonment.

“The North gets all the press,” said Vicki Baggett. “This is where the fight is, and 350 has left us. They should be here, not in D.C.”

Baggett was particularly stung by 350.org founder Bill McKibben’s recent cancellation of a speaking event that would have taken place in Nacogdoches this week. “He could have been here. This could have been the convergence. It was meant to be and it was just very disappointing. I think we just get written off because this is a very rural, poor area, and it’s real conservative.” 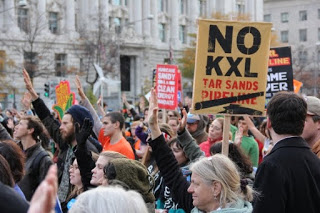 Rally against the Keystone XL pipeline in Washington, D.C., on November 18, 2012. Photo by Anna Robinson / Waging Nonviolence.
McKibben cancelled the event in order to launch a national tour called Do the Math, designed to foster a fossil fuel divestment campaign on college campuses. While there is little question that McKibben and 350.org mean to support the Tar Sands Blockade, it upsets critics further that there are only two Southern cities on the entire 21-date tour. Atlanta is the closest they get to the southern segment of the pipeline that runs from from Cushing, Oklahoma., to the Gulf Coast of Texas.

While the rest of the national climate movement may have written off the South, the 100 or so locals and visitors who took a stand in East Texas this past weekend — including the 11 who were arrested — plan to continue.

“I know it’s not looking good,” Vicki Bagget said. “But it’s not done, and I think what is happening here will continue to resonate for years.”

[Bryan Farrell is an editor at Waging Nonviolence , where he writes about environment, climate change, and people power. His work has also appeared in The Guardian, The Nation, Mother Jones, Slate, Grist, and Earth Island Journal.]