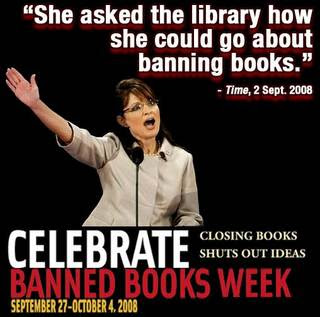 See ‘Burn, Baby, Burn: On “Fahrenheit 451” and why good democracy should make you feel bad’ by Josh Rosenblatt, Below.

Banned Books Week is the only national celebration of the freedom to read. It was launched in 1982 in response to a sudden surge in the number of challenges to books in schools, bookstores and libraries. More than a thousand books have been challenged since 1982. The challenges have occurred in every state and in hundreds of communities. People challenge books that they say are too sexual or too violent. They object to profanity and slang, and protest against offensive portrayals of racial or religious groups–or positive portrayals of homosexuals. Their targets range from books that explore the latest problems to classic and beloved works of American literature.

Click on image to enlarge.
According to the American Library Association, more than 400 books were challenged in 2007. The 10 most challenged titles were:

1. And Tango Makes Three by Justin Richardson and Peter Parnell
2. The Chocolate War by Robert Cormier
3. Olive’s Ocean by Kevin Henkes
4. The Golden Compass by Philip Pullman
5. The Adventures of Huckleberry Finn by Mark Twain
6. The Color Purple by Alice Walker
7. TTYL by Lauren Myracle
8. I Know Why the Caged Bird Sings by Maya Angelou
9. It’s Perfectly Normal by Robie Harris
10. The Perks of Being a Wallflower by Stephen Chbosky

(Click here to see why these books were challenged.)

During the last week of September every year, hundreds of libraries and bookstores around the country draw attention to the problem of censorship by mounting displays of challenged books and hosting a variety of events. The 2008 celebration of Banned Books Week will be held from September 27 through October 4.

On ‘Fahrenheit 451’ and why good democracy should make you feel bad
By Josh Rosenblatt / September 26, 2008 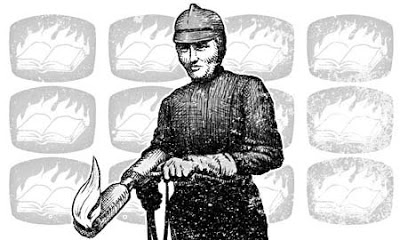 Illustration by Kevin Peake / Austin Chronicle
When I was 12 years old, word came down that the Montgomery County School Board had decided to ban a book called Amos Fortune: Free Man from all school libraries. They claimed the biography of an African prince turned slave was too controversial and culturally insensitive to be forced upon (or even made available to) the minds of impressionable children, too accurate a portrayal of the darkest chapter in American history to be taught in American schools. African princes are snatched from their villages, the banners cried, and forced into slavery! The book contains the word “nigger,” they warned. Not once, but many, many times! All across suburban Maryland, you could hear the sighs of parents who until that point had never heard of Amos Fortune: Free Man but who could now sleep soundly knowing their kids wouldn’t be coming around asking them uncomfortable questions about it.

The next day, I went out and bought myself a copy of Amos Fortune: Free Man and, with all the brazenness of early adolescence, took it to school to read during English class. I was convinced that within those pages resided a tale of such decadence, such lasciviousness, such utter degradation and human calamity as to make my hair stand on end, my knees buckle, and my soul curdle. Why else would adults be banning it?

Turns out I had gotten my hopes up for nothing: The Amos Fortune affair, rather than being my introduction to a world of controversy and open defiance, would mark instead the beginning of my realization that adults had no idea what they were talking about. I read every page of that book and discovered nothing even remotely scandalous. There were scenes of violence and racism, of course, but anyone who had made it to the seventh grade knew what slavery was and was cognizant of the fact that those subjected to it had lived lives of unaccountable misery. Nothing new there. So why had they banned Amos Fortune, when I found nothing there to differentiate it from any number of morality tales about the value of hard work and charitable living shoved daily down the throats of American students from Maine to California?

The whole fiasco left me terrified of the fragility of American liberty and ashamed of the prudishness of American culture, a feeling that has never gone away.

A curious (and very partial) list of books that have been banned, challenged, or redacted by government and/or school officials in the United States:

This line comes from François Truffaut’s adaptation of Ray Bradbury’s 1953 sci-fi classic, Fahrenheit 451, about a dystopian future society where reading has been outlawed and books are burned in the streets. Newspaper comic strips are cartoons devoid of words. Human beings rely on impossibly vapid television shows for their senses of identity and purpose (Bradbury has said that his main motivation for writing the book wasn’t concern over censorship but rather fear that television was destroying people’s interest in reading). The written word is dead.

The Captain, played by Cyril Cusack, speaks that line while explaining to the film’s hero, Guy Montag (Oskar Werner), why it’s necessary that they and their fellow firemen burn books. The firemen, after all, are the best line of defense against the reading scourge; without their ability to suss out suspected readers, the America they live in – a land of drugged-up housewives and automaton husbands – would fall prey to critical thought and individuality, resulting in self-absorption, moral relativism, and societal collapse.

The frightening thing, of course, is that the Captain’s observation isn’t entirely wrong. After all, it’s a fool who sees a correlation between happiness and intimate knowledge of the psychological motives behind Raskolnikov’s axing the pawnbroker woman in Crime and Punishment, between happiness and knowing exactly how many hundreds of thousands of Rwandans were hacked to death in 1994, between happiness and the awareness of the perilously slim and shrinking lead Barack Obama has in the current presidential election.

But isn’t that what makes American democracy so fascinating? Any society can advocate the pursuit of happiness, but it takes an especially confident one to allow its citizens the right to pursue the opposite. Despair, worthless empathy, artistic immersion are the dread of others. Unhappiness. True democracy lies in a society resigning itself to the great multiplicity of human emotion and behavior. If anything, liberty should be making us all miserable.

Truffaut, ever the Frenchman, understood this paradox as well as anyone, and with Fahrenheit 451, he created a cinematic world that celebrates the variety of human experience even as it condemns viewers to the unvaried confines of authoritarianism.
Truffaut found just the right housing slabs to film at just the right point in gray, leafless late autumn to capture the pervading sense of lifelessness compulsory to any dystopian movie. And yet, at the same time, Fahrenheit 451 is the first movie the director ever shot in color – glorious Technicolor, to be exact – and he couldn’t resist shooting it as if it were some kind of carnival fun house, a world bursting with colors that both thrill viewers and sicken them with saturation.

Witness the director’s ironic, almost cartoonish use of green-screen backgrounds. It was the most blatant and unapologetically artificial manipulation since Hitchcock (his hero), brazen in its acknowledgement of the pure contrivance that is cinematic storytelling. It’s a technique that pays tribute to the wonder of film while acting as the perfect visual parallel to Bradbury’s condemnation of ersatz broadcast reality and its detrimental effects on the human mind, on human emotion, and on human society.

It’s film honoring film and condemning it at the same time.

A curious (and partial) list of movies that have been banned by government officials, Hollywood Production Code administrators, and/or Catholic League of Decency members in the United States (with explanations):

The Birth of a Nation (racism), The Tin Drum (underage sex), The Last Temptation of Christ (blasphemy), Scarface (violence), Frankenstein (cruelty), The Moon Is Blue (existence of female sexuality), The Outlaw (existence of Jane Russell’s breasts).

Every year, the American Library Association pays tribute to the lunacy of censorship by organizing events all over the country for Banned Books Week. In Chicago, for example, there’s the Read-Out! celebration, where authors and other celebrities recite passages from their favorite banned and challenged books. In Encino, Calif., students at the Valley Beth Shalom Day School will be taken to the school library and invited to explore banned books to see what all the fuss is about (I don’t envy them their inevitable disappointment). Even the virtual world of Second Life is staging an event.