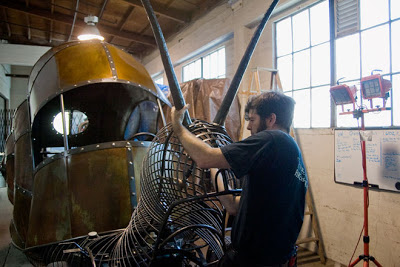 John Sarriugarte, a blacksmith and fire artist, makes adjustments to the flame-emitting feelers on the front of The Golden Mean, his snail-shaped art car. Photo by Emily Lang.
Kyrsten Mate woke up and said, ‘We have to build this giant snail’
By Emily Lang / August 29, 2008

OAKLAND, California — In a project that would make Franz Kafka grin, a 30-year-old bug has metamorphosed into a snail. The resulting creation, an art car called The Golden Mean, is a golden gastropod that glows in the dark and shoots rings of fire from its feelers. It also seats six comfortably.

Blacksmith John Sarriugarte, who fabricates custom home furnishings, worked with his wife, Kyrsten Mate, to transform a 1966 VW Bug into the rolling piece of art. The Golden Mean is making its debut at the Burning Man art festival this year.

Mate says she literally dreamed up the concept.

“I woke up and said, ‘We have to build this giant snail,'” she said. “It totally wasn’t planned. This whole project has been weird coincidences and math.”

The visually stunning vehicle takes its name from the golden ratio, a mathematical proportion that’s said to produce aesthetically pleasing art and architecture. The spiral in the snail’s shell is shockingly close to the ratio. Other inspirations for the project include the giant pink snail from Doctor Dolittle, giant mechanical elephant puppets by Royal de Luxe and Jules Verne’s imaginative creations.

For a peek at last-minute preparations that took place in Sarriugarte’s Form & Reform shop before Golden Mean headed off for its date with the playa, go here.