Bush Is a Puppet and Ehud Olmert Holds the Strings 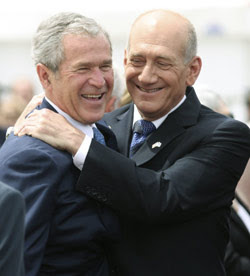 Israeli PM Ehud Olmert Claims to be Able to Order Bush Around
By Juan Cole / January 13, 2009

So outgoing Israeli Prime Minister Ehud Olmert was speaking in Ashkelon on Monday, and he said the most amazing thing. The USG Open Source Center translated the relevant passage from his speech, in which he claimed he had the ability to control US foreign policy and summarily over-rule the Secretary of State.

[Olmert:] “It transpired all of a sudden that a vote would be held in 10 minutes’ time. I tried to find President Bush, and I was told he was attending an event in Philadelphia.”

‘I know that if somebody tried to find me on the phone right now, it would have to be something unusual and extraordinary for them to say: Leave it all and go to some room to talk to me. In this case, I said: I don’t care, I have to talk to him right now.

He was taken off the podium and brought to a side room. I spoke with him; I told him: You can’t vote for this proposal.

He then instructed the secretary of state, and she did not vote for it.

Olmert’s account cannot be accurate as to detail. Bush was not interrupted during his speech in Philadelphia, and the speech was given many hours before the UN vote. But that kind of discrepancy is easily resolved if we want to believe that Olmert is telling the truth. When he called the White House, he may have initially gotten a staffer who said something like, Bush is away at Philadelphia for a speech. Olmert could have misunderstood the staffer to say that Bush was still giving the speech.

But that Condi Rice worked hard to get that UN resolution and that the other diplomats were shocked when she suddenly instructed Zalmay Khalilzad to vote against it is well known and was reported in the Arabic press at the time. Raghida Dergham wrote in the London-based pan-Arab daily, al-Hayat, on Jan. 10, 2009 (OSC trans.):

French Foreign Minister Bernard Kouchner chaired the session, since his country is the UNSC’s chairman this month, which was attended by US Secretary of State Condoleezza Rice, British Foreign Secretary David Miliband . . . [etc.]

Rice surprised the meeting by abstaining from voting after the Americans had left a clear impression during the negotiations of their intention to vote in favour of the resolution. . .

British diplomacy played a consensual and leading role which contributed to breaking the cycle of delay and procrastination by French diplomacy. Reporting on the penultimate session of the ministers, sources said Kouchner tried to postpone the voting until today on the pretext that Presidents Husni Mubarak and Nicola Sarkozy approved this delay but the Egyptian foreign minister replied back immediately denying this was true about the Arab stand. The sources said the Saudi foreign minister demanded that Kouchner put his country’s stand aside and respond to the demand to hold a session for voting. The British foreign secretary was on the point of presenting the consensual resolution regardless of the French and US stand. Russia intervened at the last moments and told the Arab side it was ready to participate with Britain in putting up the draft resolution officially for a vote. US Ambassador Zalmay Khalilzad arrived suddenly at the meeting to report his country’s stand. . .

So Dergham’s account, gleaned from UN sources in New York, shows that Rice had been more in favor of the cease-fire resolution than Bernard Kouchner of France, who used his position as chair to attempt to delay it coming up for a vote. You could imagine Olmert calling up Sarkozy and urging this delay. But Kouchner could not stand against the combined pressure of Britain, Russia and Saudi Arabia, and had to allow the vote to go forward. Then everyone was surprised by Rice’s about-face. And it was reported at the time that she changed her mind after a phone call from Bush.

So the substance of Olmert’s allegations are consistent with Dergham’s account, gleaned from interviews with eyewitnesses to the process among the Arab participants: “Rice surprised the meeting . . .”

It is therefore reasonable to think that Olmert did talk to Bush last Thursday, and that he did have Rice over-ruled. One can only imagine that he had tried hard to dissuade Rice from participating in the drafting process at all, and had tried to have her veto the resolution, in accordance with standard US procedure of shielding Israel from the UNSC. She must have blown him off or been evasive, alarming him that there would be a UN ceasefire resolution before which Israel might have to bow. My own guess is that Olmert had Bush tell her to veto it altogether, but you have to wonder whether she and Khalilzad engaged in their own little final rebellion and so just voted “present,” which allowed the resolution to pass. (Olmert has ignored it.)

Olmert reports that Bush had no idea what the substance of the resolution was, and this anecdote is consistent with what we know about how this White House has functioned. Bush admitted to Bob Woodward that an important decision on sending some troops to Iraq had been made by National Security Adviser Stephen Hadley and that Bush had not sat in on the relevant meetings. So Rice was at the UN on her own, thinking she was a plenipotentiary of Bush, and Olmert was annoyed at this attitude and decided to put her in her place.

Why did Olmert spill the beans on his backroom maneuvering against Rice? It is a very damaging thing that he said. As Daniel Levy, who had been a Labor Party adviser on peace negotiations, told The Los Angeles Times’s Paul Richter:

This is terrible for the United States . . . This confirms every assumption they have in the Arab world about the tail wagging the dog. . . . It’s a story you’re likely to hear quoted there for years to come.” Levy also accused Olmert of “unparalleled arrogance.”. . .”There are some things you don’t say, even in Ashkelon, even in Hebrew . . .

The likelihood is that Olmert was stung by severe criticism of his government for allowing the UNSC cease-fire resolution to be passed. His Kadima Party is in a neck and neck race with the even more hard line and far rightwing Likud Party, with elections to be held on February 10. Presumably Olmert was trying to deflect the Likudniks’ charges that Kadima was inept or impotent, and to improve the standing of his would-be successor, Tzipi Livni (now the Foreign Minister).

Olmert is having to step down as prime minister because of a corruption scandal that blew up in his face and made him look petty and greedy. As a mediocre politician with an over-sized ego, he doesn’t have many opportunities left to try to rehabilitate his reputation. If he pushed W. around for Israel’s sake while she warred with the Hamas terrorists (his way of thinking), then maybe that would take some of the edge off his unseemly money-grubbing and massive list of failures, which include the 2006 Lebanon War.

Finally we come to the really big mystery. If the substance of what Olmert said is correct, even if he got some details wrong, then why in the world did Bush listen to him? Bush is outgoing and faces no new elections. His party cannot benefit or suffer with the Israel lobbies from a decision he took in relative secrecy since it won’t even face another election for 2 years, by which time this Gaza war will be completely forgotten.

Why in the world would Bush over-rule the US Secretary of State, for the sake of Olmert, in the midst of delicate negotiations with European and Arab allies? Here are the only possibilities I can think of:

1. Bush is as dumb as he looks and just agrees with the last person he spoke to.

2. Bush hates it when the roar of cannon dies down, and is a sadist who enjoys prolonging war far too much to ever actively back a ceasefire.

3. Olmert has something over Bush. I remember that Bush had taken on Sharon in September of 2001, calling for a Palestinian state and ordering Sharon to stop colonizing the West Bank. Sharon was so furious that he compared Israel’s situation to that of Czechoslovakia in 1938, when the rest of Europe let Hitler grab part of it. But by spring of 2002 Bush was bending over backward to please the Likud. What changed? Something did. There is a mystery to be explained here. I only point out that along with the previous two explanations, this one would make sense of otherwise baffling behavior on Bush’s part.

Precisely because his overly frank speech raises these sorts of questions, I expect Olmert to deny the entire address, and then it will be expunged from the public record and never spoken of again.

In any case, this slippage of the veil over the way US foreign policy is being dictated by a foreign country reinforces the need for a Peace PAC or ‘For America’ PAC to counter-act the American Israel Public Affairs Committee, which is obviously way too powerful for Israel’s own good. J-Street and Brit Tzedik Ve Shalom and Tikkun and other liberal Jewish-American organizations are trying to do the right thing here. Whereas AIPAC gets plenty of help from the evangelicals, the rest of us are letting down the majority of the Jewish community that supports the peace process by not helping it lobby on this issue.

That resolution Olmert tried to spike means that his government’s continued war on Gaza (he ordered 60 airstrikes on Monday through early Tuesday) is even more illegal than the whole enterprise was to begin with.