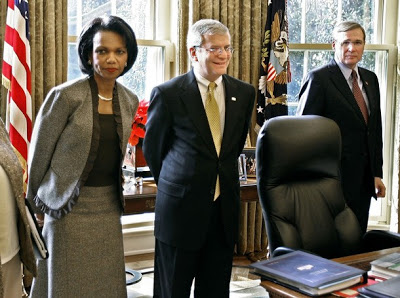 Joshua Bolten (center) with a couple of other White House criminals
Bush steps up fight over congressional authority
By Matt Apuzzo / August 28, 2008

WASHINGTON — The Bush administration is raising the stakes in a court fight that could change the balance of power between the White House and Congress.

Justice Department lawyers said Wednesday that they will soon ask a federal appeals court not to force the president’s top advisers to comply with congressional subpoenas next month. President Bush argues Congress doesn’t have the authority to demand information from his aides.

It was a historic loss for the Bush administration, a stinging ruling in the first such case ever to make it to the courts.

The House Judiciary Committee responded swiftly, demanding Miers appear Sept. 11 as it investigates whether federal prosecutors were inappropriately fired as part of a White House effort to politicize the Justice Department.

The Bush administration had already indicated it would appeal but Justice Department lawyers said Wednesday that they will ask the court to step in quickly and temporarily put Miers’ appearance on hold while the appeal plays out. It’s a risky move for an administration that has spent years trying to strengthen the power of the presidency.

If the appeals court refuses to temporarily block the testimony, it would essentially be endorsing Bates’ ruling against the Bush administration. Miers likely would have to comply with the subpoena, setting a precedent that would give Congress new teeth in its investigations and weaken future presidents.

On the other hand, if the appeals court temporarily blocks Miers’ testimony, it could allow the Bush administration to run out the clock before a new Congress comes to Washington and the case becomes moot. In that situation, Bates’ order will have been weakened and future presidents will have more wiggle room.

The Bush administration could have taken other steps to avoid a showdown at the appeals court. Even if it appealed Bates’ ruling, it could have negotiated a deal with Congress in which Miers and Bolten provided some information voluntarily and lawmakers agreed to withdraw the lawsuit.

“We have not found willing partners on the other side of the table,” Nathan said in court Wednesday, telling Bates that “we’re being dunced around here.”

Justice Department attorney Carl Nichols called those statements misleading but declined to elaborate. He said the Justice Department would file documents with the appeals court by Thursday asking the judges to step in.

This entry was posted in RagBlog and tagged Bush Administration, Criminal Justice. Bookmark the permalink.