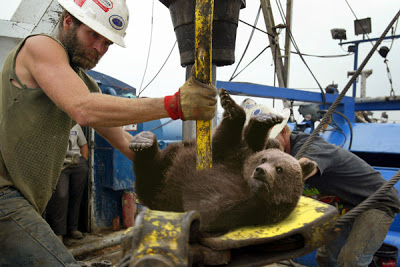 “There are over 100 billion tons of untapped, domestic wildlife lying beneath, on, and above the surface of Alaska’s North Slope region,” said Bush during a White House press conference. “We have an obligation not only to our society, but to future generations, to begin drilling these polar bears, grizzlies, harbor porpoises, Roosevelt elks, sea otters, muskrats, and snowshoe hares immediately.”

According to Secretary Of The Interior Dirk Kempthorne, who recently toured the Lake Teshekpuk area with a team of bio-mineralogists, one in four animals drilled in early tests have shown positive yield.

“We can achieve our goal without disturbing the delicate balance of the ecosystem,” said Kempthorne, looking on as rig operators took exploratory core samples of 20 bearded seals in order to gauge the mammals’ interior density. “But if the government opens up the nearly 200 species of birds, fish, and marine and land mammals to public drilling, the U.S. would be capable of churning out over 9.3 billion barrels of wildlife each year—more than three times the amount we currently drill.”

Wildlife prospectors in other parts of Alaska applaud Bush’s position, saying that, if funding is increased, drillers will be able to tap larger, higher-yield animals such as grizzly bears and musk oxen.

“The technology is there, but there’s little economic incentive to drill anything larger than timber wolves,” said Cal Fowler, an independent prospector and former wildcat driller. “With more federal money we can invest in necessary hardware, such as more durable annular diamond-impregnated drill bits, which can bore two-inch diameter holes deep through a solid bull-walrus midsection in seconds.”

Drill foremen have already begun digging shallow exploratory holes through the surface flesh of over 5 million animals to provide workspace for the drillers and their equipment. Once this step is complete, an electrical generator powered by a large diesel engine will plunge rotating carbide-steel-tipped drill bits through the animal, boring through the skin, bone, or blubber at speeds of up to 6,500 rpm. The drillers will then guide the direction of the borehole using top-drive rotary steerable wellbores, which allow them to drill through targeted areas in the wildlife with incredible precision.

Walking through a field of steadily pumping Canada lynx, Fowler defended wildlife drilling as “one of the most environmentally responsible methods of drilling,” saying that it is a renewable resource, and the ecologically sensitive wildlife refuge is almost completely unaffected since pre-existing environmental laws ensure that the drilling of individual animals will not damage the environment.

Energy giant ExxonMobil has already begun to widen its wildlife-drilling efforts in response to the Bush Administration’s stance.

“We have set up an offshore production platform capable of efficiently extracting over 15,000 Arctic grayling fish from the Beaufort Sea each day, and then drilling them,” ExxonMobil Chief Engineer For Wildlife Drilling Operations Frank Salinas said. “And advances in horizontal directional drilling may soon allow us to simultaneously drill through two arctic foxes three miles apart.”

“It’s an exciting time to be in the wildlife-drilling field,” Salinas added.

Bush’s call for more wildlife drilling has come under fire by alternate wildlife-use advocates, who call his policy shortsighted.

“The administration should be encouraging research into viable new technologies,” said Sylvia Hermann, chairman of Advocates For Cleaner-Burning Fauna. “The energy produced by solar generators could be used to incinerate vast herds of moose, even in the coldest winter months. Wind-produced electricity could electrocute Beluga whales in their own habitats, with no need for offshore drilling, and hydroelectric dams could be used to drown grizzly bears. Perhaps one day geothermic heat could be harnessed to broil entire wildlife-rich regions alive.”

Continued Hermann, “It’s vital that we preserve the arctic wildlife so that our children, and our children’s children, will still have animals to drill when they grow up.”

The Bush administration is also proposing the creation of a Strategic Wildlife Preserve, a series of 15-million-cubic-meter above-ground tanks that would store an emergency supply of over 700 million tightly packed animals.