Bush Visits Calgary: Just $400 a Seat to Hear Him 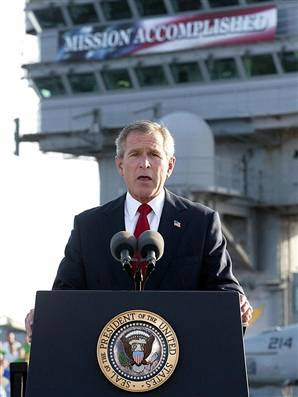 Paying to hear Dubya weighing in on world challenges he made considerably more dire is like Dick Cheney charging for safe hunting tips.

Dinner footwear may be optional
By Bill Kaufmann / February 19, 2009

I really hope he shows up in the flight suit.

He can also, in good conscience, bring along that banner he once courageously blamed on sailors because this time, his mission really is accomplished.

It’s hard being a stranger to those accomplishments — international law and a nation’s image disemboweled, untold billions cast to the winds, cronies rewarded and the rest be damned.

Civilians incinerated by liberty bombs while it’s others who are the terrorists.

Like 9/11 with its many warnings, failure a successful ingredient for the ensuing narrative.

Where does it end? It’s like capping carp in a tub.

But his biggest accomplishment may unfold next month and Calgary’s his chosen stage.

While legal peril swirls around George W. Bush’s White House lawyers for their role in empowering torturers, Bush will cross an international border — possibly for the first time — as a free and private citizen.

It’s only a couple of months since a Senate committee fingered Bush and Dick Cheney for torture, meaning U.S. law enforcement is obligated to indict them.

Almost the day word came of his Calgary date, unredacted U.S. government documents detailed how their interrogators in Iraq and Afghanistan battered their victims to death.

Up in the land of leaky tailing ponds, far from a cynical D.C. Beltway, there’s an unwitting acknowledgement of the power reality. “He’s a free man — he can travel to any country he wants,” said Ed Stelmach.

Pity that — and two-tiered justice, even under new management in Washington.

So thank goodness for tiny indignities. While Bush’s Rasputin, Karl Rove, commanded $500 a head for his city appearance last fall, the Calgary stop on Bush’s misunderestimation tour will settle for $400.

It could be recognition that enduring Bush’s war with the English language has always been its own “enhanced interrogation.”

Paying to hear Dubya weighing in on world challenges he made considerably more dire is like Dick Cheney charging for safe hunting tips.

Could it be that Rove recommended GOP-friendly, oily Calgary to his old boss?

Bush may have been a dud as an oilman but his credentials in sticking his neck out to secure petroleum supplies are solid.

Footwear at dinner could even be optional.

With briefing, he might even be aware that, among Canadians, Calgarians were weirdly enthusiastic over his Iraq bloodfest.

And fake cowboy Bush, who tired abruptly of clearing brush last month and sold the ranch, will enjoy communing with the drugstore spur spinners up north.

To its neighbours, Calgary’s fast becoming Canada’s receptacle of infamy.

It must be a sturdy thing, our western hospitality — patient and forgiving.

Allowing its exploitation is nothing new, with those white hats handed out so unscrupulously.

Maybe a ringside seat to the ascent and normalization of lawlessness really is worth the price of admission.

If Calgarians are lucky, a few new Bushisms will be coined for posterity.

And those he’d even deliver under oath.

This entry was posted in RagBlog and tagged George W. Bush, War Crimes. Bookmark the permalink.

2 Responses to Bush Visits Calgary: Just $400 a Seat to Hear Him