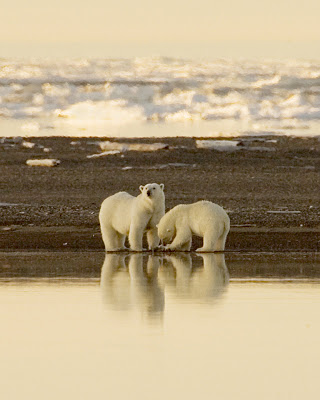 ‘The Bush Administration had not wanted to designate the polar bear as threatened in the first place; now Palin’s lawsuit provided cover to backtrack on the decision’
By Mark Hertsgaard / September 10, 2008

It wasn’t much noticed at the time, but three weeks before she was chosen as John McCain’s vice presidential running mate, Alaska Governor Sarah Palin played a key supporting role in the latest episode of the Bush Administration’s eight-year war on the Endangered Species Act, one of the cornerstones of American environmental law. On August 4 Alaska sued the government for listing the polar bear as a “threatened” species, an action, the lawsuit asserted, that would harm “oil and gas…development” in the state. In an accompanying statement, Palin complained that the listing “was not based on the best scientific and commercial data available” and should be rescinded.

The Interior Department had issued the listing only after environmental groups filed two lawsuits, and the courts ordered compliance. While the polar bear population was currently stable, the plaintiffs argued, greenhouse gas emissions were melting the Arctic ice that polar bears rely on to hunt seals, their main food source. A study by the US Geological Survey supported this argument, concluding that two-thirds of all polar bears could be gone by 2050 if Arctic ice continues to melt as scientists project. The listing was the first time global warming had been cited as the sole premise in an Endangered Species Act case, and Interior Secretary Dirk Kempthorne clearly wanted it to be the last. When Kempthorne announced the polar bear listing on May 14, he emphasized that it would not affect federal policy on global warming or block development of “our natural resources in the Arctic.”

A week after Palin’s lawsuit, Kempthorne delivered on that pledge. On August 11 he proposed new rules that could allow federal agencies to decide for themselves whether their actions will imperil a threatened or endangered species. The rule reverses precedent: since passage of the Endangered Species Act in 1973, scientists from the Fish and Wildlife Service have made such determinations independent of the agency involved. Under the new rule, if the Army Corps of Engineers is building a dam, the corps can decide whether it is putting species at risk. To make sure no one missed the point, Kempthorne told reporters that the new rule, which he termed “a narrow regulatory change,” would keep the Endangered Species Act from becoming “a back door” to making climate change policy.

Hated by the right wing as an infringement on property rights, the Endangered Species Act has been on Bush’s hit list since the beginning of his presidency, when he chose Gale Norton as his first Interior Secretary. A Republican woman of the West like Palin, Norton assailed the act and did all she could to undermine it. “The Bush Administration has listed only sixty species as threatened or endangered, compared with 522 under Clinton and 231 under the first President Bush,” says Noah Greenwald, science director of the Center for Biological Diversity, the lead plaintiff in the polar bear case. “And it took a court order to make each of those sixty listings happen.”

Kempthorne’s proposal nevertheless seems likely to go forward. An obligatory thirty-day period for public comment expires September 15, after which Interior can begin to implement the rule. Congress could block funding, but few expect that to happen. Lawsuits are certain to follow, but critics say the quickest solution would be for the next administration to withdraw the rule. Barack Obama seems likely to do that; he immediately condemned Kempthorne’s proposal. John McCain was silent. But his choice of Palin–who does not believe global warming is caused by humans but does think it’s acceptable for humans to gun down wolves from airplanes–suggests that Arctic creatures have much to fear from a McCain administration.

And not just Arctic creatures. What’s missing from most discussions about endangered species is that preserving other species is not an act of charity; it is essential to our own survival. “Endangered species issues are usually seen as humans versus nature–we act in favor of one or the other–and that’s just not the case,” says Aaron Bernstein, a fellow at the Center for Health and the Global Environment at Harvard and an editor (with Eric Chivian) of Sustaining Life: How Human Health Depends on Biodiversity. “Polar bears hold tremendous value to medicine, for example,” explains Bernstein. “There is something about the metabolism of female polar bears that allows them to put on tremendous amounts of fat before winter but not become Type 2 diabetic. We don’t understand how they do it yet, but this research is hugely important for the tens of millions of people who suffer from Type 2 diabetes.”

But human dependence on other species is even broader. “We need [ants] to survive, but they don’t need us at all,” notes naturalist E.O. Wilson in a quote Bernstein and Chivian include in Sustaining Life. Without ants (and countless other underground species that will never be the subject of impassioned environmental appeals) to ventilate the soil, the earth would rot, halting food production. Without trees and other elements of a healthy forest, water supplies would shrink. Take away coral reefs and you destroy the bottom of the marine food chain. Global warming is on track to make as much as one-quarter of all plant and animal species on earth extinct by 2040, threatening general ecosystem collapse. To study the natural world is to realize, in the words of the environmental axiom, that everything is connected. What we do to the polar bears, we do to ourselves.

[Mark Hertsgaard is The Nation’s environment correspondent. He is a fellow of The Nation Institute and the author of five books that have been translated into sixteen languages, including Earth Odyssey: Around the World in Search of Our Environmental Future. His next book is Living Through the Storm: Our Future Under Global Warming. more…]