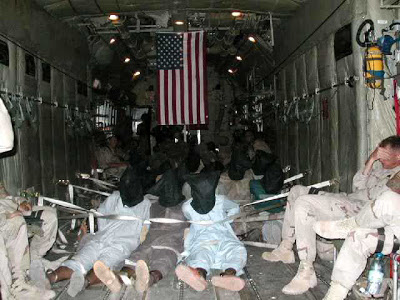 The existence of a secret, CIA-run prison on the island of Diego Garcia in the Indian Ocean has long been a leaky secret in the “War on Terror,” and yesterday’s revelations in TIME — based on disclosures by a “senior American official” (now retired), who was “a frequent participant in White House Situation Room meetings” after the 9/11 attacks, and who reported that “a CIA counter-terrorism official twice said that a high-value prisoner or prisoners were being interrogated on the island” — will come as no surprise to those who have been studying the story closely.

The news will, however, be an embarrassment to the U.S. government, which has persistently denied claims that it operated a secret “War on Terror” prison on Diego Garcia, and will be a source of even more consternation to the British government, which is more closely bound than its law-shredding Transatlantic neighbor to international laws and treaties preventing any kind of involvement whatsoever in kidnapping, “extraordinary rendition” and the practice of torture.

This is not the first time that TIME has exposed the existence of a secret prison on Diego Garcia. In 2003, the magazine broke the story that Hambali, one of 14 “high-value detainees” transferred to Guantánamo in September 2006, was being held there, and in the years since confirmation has also come from other sources. Twice, in 2004 and 2006, Barry McCaffrey, a retired four-star US general, who is now professor of international security studies at the West Point military academy, revealed the prison’s existence. In May 2004, he blithely declared on MSNBC’s Deborah Norville Tonight, “We’re probably holding around 3,000 people, you know, Bagram air field, Diego Garcia, Guantánamo, 16 camps throughout Iraq,” and in December 2006 he spoke out again, saying, in an NPR interview with Robert Siegel, “They’re behind bars … we’ve got them on Diego Garcia, in Bagram air field, in Guantánamo.”

The prison’s existence was also confirmed by Dick Marty, a Swiss senator who produced a detailed report on “extraordinary rendition” for the Council of Europe in June 2007 (PDF) and by Manfred Novak, the UN’s Special Rapporteur on Torture, in March this year. Having spoken to senior CIA officers during his research, Marty told the European Parliament, “We have received concurring confirmations that United States agencies have used Diego Garcia, which is the international legal responsibility of the UK, in the ‘processing’ of high-value detainees,” and Manfred Novak explained to the Observer that “he had received credible evidence from well-placed sources familiar with the situation on the island that detainees were held on Diego Garcia between 2002 and 2003.” The penultimate piece of the jigsaw puzzle came in May, when El Pais broke the story that “ghost prisoner” Mustafa Setmariam Nasar, whose current whereabouts are unknown, was imprisoned on the island in 2005, shortly after his capture in Pakistan — although the English-speaking press failed to notice.

Despite these previous disclosures, yesterday’s article, by Adam Zagorin, is particularly striking because of the high-level nature of the source, and his admission that “the CIA officer surprised attendees by volunteering the information, apparently to demonstrate that the agency was doing its best to obtain valuable intelligence.” In addition, the source noted that “the U.S. may also have kept prisoners on ships within Diego Garcia’s territorial waters, a contention the U.S. has long denied.”