But We Are At the End of Our Rope

“It is not a good thing that al-Maliki is pressuring Iraqi refugees in Egypt and Jordan to return. The UNHCR says it is too dangerous for them as yet. Some returnees in Diyala Province were recently evicted from their homes yet again by militia action. Since Iraqis are still leaving Iraq for Jordan and Syria in some numbers, the whole thing is a publicity stunt. Thousands came to Jordan last May alone. More are certainly leaving than returning.” Juan Cole, Informed Comment 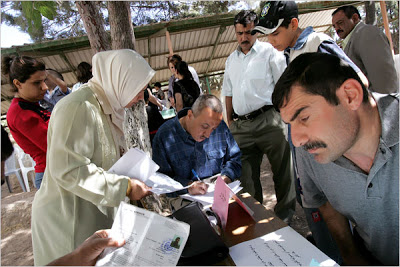 Iraqi refugees in Amman tried to register their children for a program that would allow them to attend private schools this fall. Photo: Shawn Baldwin for The New York Times
Slowly, Iraq brings refugees home as security improves
By Ellen Knickmeyer, / September 8, 2008

CAIRO — Iraqi refugee Jenan Adnan Abdel-Jabbar arrived for the Iraqi government’s free airlift back home with eight suitcases, five children and a knotted skein of hope and fear in her heart.

At she stepped onto the curb at Cairo’s airport, hope rose. About 250 other returning Iraqis were outside the terminal—as many of her compatriots as Abdel-Jabbar had seen together in her two years in Egypt.

“All Iraq is here!” Abdel-Jabbar exclaimed. A smile was on her face. But worry creased her forehead.

More than 1,000 Iraqi refugees in Egypt have returned home since Aug. 11, when Iraqi Prime Minister Nouri al-Maliki began sending his state jet to fetch them. Iraq will expand its no-cost return program to Jordan this month, dispatching planes and buses to bring back more than 500 refugees there, Iraq’s envoy in Amman, Jordan, said Friday.

While Iraq’s leaders say their country is safe again and government ministers are welcoming returnees on red carpets at Baghdad’s airport, the International Organization for Migration says 13,000 refugees had returned to Iraq before last month’s airlift. That is just a small fraction of the estimated 2.5 million people who fled Iraq in the violence following the 2003 U.S.-led invasion.

Iraqis taking advantage of the airlifts here said they had been motivated by the free flights and by reports of diminished violence in Iraq—Abdel-Jabbar said she and her husband had received weekly e-mails from their two married daughters in Iraq’s Diyala province, urging them, “Come home!”

But for Abdel-Jabbar and all of half a dozen other returning refugee families interviewed, fear of returning remained strong, overridden by only one factor. Years of living abroad as refugees had exhausted their savings—and their options.

“Of course we are afraid,” Abdel-Jabbar said in her apartment four days before the family’s departure. “But we are at the end of our rope.”

This entry was posted in RagBlog and tagged Iraq, Refugees. Bookmark the permalink.