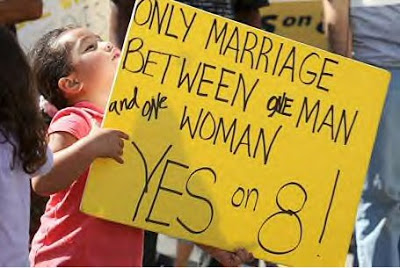 LOS ANGELES – Voters put a stop to same-sex marriage in California, dealing a crushing defeat to gay-rights activists in a state they hoped would be a vanguard, and putting in doubt as many as 18,000 same-sex marriages conducted since a court ruling made them legal this year.

The gay-rights movement had a rough election elsewhere as well Tuesday. Ban-gay-marriage amendments were approved in Arizona and Florida, and Arkansas voters approved a measure banning unmarried couples from serving as adoptive or foster parents. Supporters made clear that gays and lesbians were their main target.

But California, the nation’s most populous state, had been the big prize. Spending for and against Proposition 8 reached $74 million, the most expensive social-issues campaign in U.S. history and the most expensive campaign this year outside the race for the White House. Activists on both sides of the issue saw the measure as critical to building momentum for their causes.

“People believe in the institution of marriage,” Frank Schubert, co-manager of the Yes on 8 campaign said after declaring victory early Wednesday. “It’s one institution that crosses ethnic divides, that crosses partisan divides. … People have stood up because they care about marriage and they care a great deal.”

With almost all precincts reporting, election returns showed the measure winning with 52 percent. Some provisional and absentee ballots remained to be tallied, but based on trends and the locations of the votes still outstanding, the margin of support in favor of the initiative was secure.

Exit polls for The Associated Press found that Proposition 8 received critical support from black voters who flocked to the polls to support Barack Obama for president. Blacks voted strongly in favor of the ban, while whites narrowly opposed it and Latinos and Asians were split.

Californians overwhelmingly passed a same-sex marriage ban in 2000, but gay-rights supporters had hoped public opinion on the issue had shifted enough for this year’s measure to be rejected.

“We pick ourselves up and trudge on,” said Kate Kendell, executive director of the National Center for Lesbian Rights. “There has been enormous movement in favor of full equality in eight short years. That is the direction this is heading, and if it’s not today or it’s not tomorrow, it will be soon.”

The constitutional amendment limits marriage to heterosexual couples, nullifying the California Supreme Court decision that had made same-sex marriages legal in the state since June.

Similar bans had prevailed in 27 states before Tuesday’s elections, but none were in California’s situation — with about 18,000 gay couples already married. The state attorney general, Jerry Brown, has said those marriages will remain valid, although legal challenges are possible.

Elsewhere, voters in Colorado and South Dakota rejected measures that could have led to sweeping bans of abortion, and Washington became only the second state — after Oregon — to offer terminally ill people the option of physician-assisted suicide.

A first-of-its-kind measure in Colorado, which was defeated soundly, would have defined life as beginning at conception. Its opponents said the proposal could lead to the outlawing of some types of birth control as well as abortion.

The South Dakota measure would have banned abortions except in cases of rape, incest and serious health threat to the mother. A tougher version, without the rape and incest exceptions, lost in 2006. Anti-abortion activists thought the modifications would win approval, but the margin of defeat was similar, about 55 percent to 45 percent of the vote.

“The lesson here is that Americans, in states across the country, clearly support women’s ability to access abortion care without government interference,” said Vicki Saporta, president of the National Abortion Federation.

In Washington, voters gave solid approval to an initiative modeled after Oregon’s “Death with Dignity” law, which allows a terminally ill person to be prescribed lethal medication they can administer to themselves. Since Oregon’s law took effect in 1997, more than 340 people — mostly ailing with cancer — have used it to end their lives.

The marijuana reform movement won two prized victories, with Massachusetts voters decriminalizing possession of small amounts of the drug and Michigan joining 12 other states in allowing use of pot for medical purposes.

Henceforth, people caught in Massachusetts with an ounce or less of pot will no longer face criminal penalties. Instead, they’ll forfeit the marijuana and pay a $100 civil fine.

The Michigan measure will allow severely ill patients to register with the state and legally buy, grow and use small amounts of marijuana to relieve pain, nausea, appetite loss and other symptoms.

Nebraska voters, meanwhile, approved a ban on race- and gender-based affirmative action, similar to measures previously approved in California, Michigan and Washington. Returns in Colorado on a similar measure were too close to call.

Ward Connerly, the California activist-businessman who has led the crusade against affirmative action, said Obama’s victory proved his point. “We have overcome the scourge of race,” Connerly said.

Energy measures met a mixed fate. In Missouri, voters approved a measure requiring the state’s three investor-owned electric utilities to get 15 percent of their electricity from renewable sources by 2021. But California voters defeated an even more ambitious measure that would have required the state’s utilities to generate half their electricity from windmills, solar systems, geothermal reserves and other renewable sources by 2025.

Two animal-welfare measures passed — a ban on dog racing in Massachusetts, and a proposition in California that outlaws cramped cages for egg-laying chickens.

In San Francisco, an eye-catching local measure — to bar arrests for prostitution — was soundly rejected. Police and political leaders said it would hamper the fight against sex trafficking. And in San Diego, voters decided to make permanent a ban on alcohol consumption on city beaches.