California Supremes on Prop. 8 : The Return of Separate But Equal 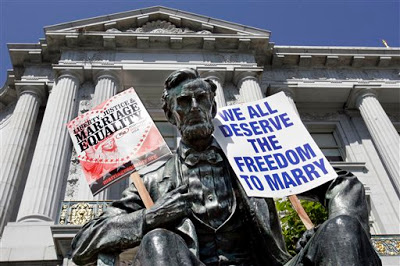 Demonstrators placed signs on a statue of Lincoln in front of San Francisco City Hall on May 26, 2009, after the California Supreme Court ruling upholding Prop. 8. Photo by Paul Sakuma.

In reality, the point of the Court’s muddled ruling is to legally justify homophobic discrimination.

Finally, the Court claimed that same-sex couples have the same rights as opposite sex couples: supposedly, we have the right to “choose one’s life partner and enter with that person into a committed, officially recognized, and protected family relationship (translation: civil union) that enjoys all of the constitutionally based incidents of marriage.”

In yesterday’s bizarre ruling, the California Supreme Court codified three different sets of rules for three different types of supposedly “equal” citizens: all non-LGBT people have the right to get married; some LGBT (lesbian, gay, bisexual and transgender) individuals have this right; most do not. Chief Justice Ronald M. George said the measure “carves out a narrow and limited exception” to the citizens’ constitutional rights but leaves undisturbed “all of the other extremely significant substantive aspects of a same-sex couple’s (rights).”

But how can this ruling meet the constitutional guarantee of equality if some queers can be legally married while the rest are legally prohibited from doing the very same thing? In essence, the ruling implies that words have no meaning; ”marriage,” apparently, is essentially symbolic.

But such thinking is patently absurd: as any LGBT individual knows, the state and federal governments use legal definitions of marriage to determine eligibility for numerous rights and benefits including sick leave, tax breaks, prison visitation rights, property, health benefits, adoption, social security benefits etc. As an article in today’s New York Times pointed out, the Supreme Court’s tortured logic is like telling black people that sitting in the back of the bus is not important, as long as the front and the back of the bus arrive at its destination at the same time.

In reality, the point of the Court’s muddled ruling is to legally justify homophobic discrimination. As the lone dissenter — Justice Carlos Moreno — wrote: “Proposition 8 strikes at the core of the promise of equality that underlies our California Constitution and “places at risk the state constitutional rights of all disfavored minorities.”

1 Response to California Supremes on Prop. 8 : The Return of Separate But Equal