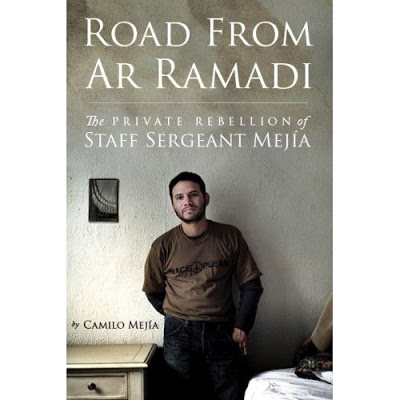 ‘Mejia’s primary message is that conscience, not combat, is the source of our freedom.’
By Susan Van Haitsma / The Rag Blog / October 20, 2008

When Camilo Mejia walked into the auditorium of UT’s Garrison Hall where he was to speak last Thursday night, his first reaction was to shake his head at the large book-cover images of himself that were projected onto screens in front. He’s a humble guy, and self-promotion is not his leaning.

But, he’s on the Resisting Empire speaking tour with the new Haymarket Books publication of The Road from Ar Ramadi: The Private Rebellion of Staff Sergeant Camilo Mejia: An Iraq War Memoir, so he was in Austin to promote both the book and the mission of his fellow Iraq Veterans Against the War: immediate and unconditional withdrawal of occupation forces from Iraq, adequate care for all veterans and reparations for Iraq.

With his youthful good looks, casual attire and backpack slung over his shoulder, Mejia could have been one of the many students in his audience. But, when he began to speak, his seriousness revealed a deeper level of experience. He invited the five other members of Iraq Veterans Against the War who were present to join him in the front and take questions from the crowd, creating an instant IVAW panel that personified the variety of membership within the rapidly growing organization.

As chair of the board of IVAW, Mejia reported that from seven original members who organized the group in July 2004, IVAW membership has expanded to about 1400, including the most quickly growing contingent: active duty soldiers. One of the newest chapters formed at Ft. Hood this year.

Mejia stressed the importance of the camaraderie that he and other vets experience through their involvement with IVAW. The sense of shared purpose and belonging mirrors an aspect of military life they value. He also said that in his role with IVAW, he has learned a new sense of what leadership entails: “respect, communication and shared ideals,” rather than leadership based on fear and punishment that he was trained to demonstrate as an army staff sergeant.

Mejia’s primary message is that conscience, not combat, is the source of our freedom. When a soldier is in the midst of combat, it is very difficult to think about moral implications. “You’re under so much pressure; there’s so much fear, so much fatigue.” Soldiers can’t be expected to weigh right and wrong in the middle of a firefight. Drilled in reflexive fire training and armed with powerful weapons, they don’t have to get an order to kill civilians; they’re just thrown into situations where they do it. Mejia said that in the five months he was in Iraq, his unit killed 33 civilians. Only three were armed.

Mejia talked about following orders to abuse Iraqi prisoners. He describes this also in the new film, Soldiers of Conscience, a documentary that happened to air in Austin the same night that Mejia spoke here. While in Iraq, Mejia felt conflicted about what he was doing, but it wasn’t until he was home on a two week leave that he had the time and distance to really think about it. “Some people say, ‘once a soldier, always a soldier,'” he says in the film. “Well, once a human being, always a human being.”

Through his interviews, his appearances in documentaries like Soldiers of Conscience and The Ground Truth, his speaking tours and in his own incisive writing, Mejia has modeled what IVAW has been aiming to do as a group through the “Winter Soldier” hearings and panels. As he said in the concluding remarks of the initial Winter Soldier hearings held in March ’08 — now transcribed in a new book (also published by Haymarket Books), Winter Soldier, Iraq and Afghanistan: Eyewitness Accounts of the Occupations,

Winter Soldier testimony from the March hearings can be seen on the IVAW website, and the book can be ordered there, too.

As terrible as it is to hear the testimonies of these veterans, it is even more terrible to have lived the stories, either as a soldier or as an Iraqi or Afghan civilian. As US Marine veteran Anthony Swofford writes in his foreword to Winter Soldier, “Do not turn away from these stories. They are yours, too.”

As I walked home from Mejia’s presentation, I passed the brilliantly burnt orange-lit UT tower, on which is inscribed the new testament passage, “Ye shall know the truth, and the truth shall make you free.” I passed the Cesar Chavez statue that includes several Chavez quotes, such as “You cannot oppress the people who are not afraid anymore,” and “You cannot humiliate the person who feels pride.”

We don’t turn away from civil rights stories, from freedom movement stories, because they are our stories. Veterans who are using their voices and actions to try to stop war are joining this proud legacy, exchanging weapons for the power of truth. The freedom they are gaining is ours, too.

During the final presidential debate, the candidates and the moderator prodded one another to explain how they would pay for particular programs and policies they believe will help the US recover from its economic crisis.

Yet, with all the talk about taxes and scarcity of federal funds for what America needs, the candidates and the moderator avoided discussing the primary reason that funds for education, health care, alternative energy and civic infrastructure are in such short supply: war spending. In fact, even apart from the huge costs of the occupation of Afghanistan and Iraq, the US uses approximately half of it’s federal tax revenue, excluding trust funds like Social Security, to fund the military budget.

Whether or not one approves of this federal spending priority — and I obviously don’t — the fact of its effect on our economic crisis should be faced squarely, not swept under the table.

If candidates won’t talk about the war’s costs, there are war veterans who will.

Camilo Mejía grew up in Nicaragua and Costa Rica before moving to the United States in 1994. He joined the military at the age of nineteen, serving as an infantryman in the active-duty army for three years before transferring to the Florida National Guard. After fighting in Iraq for five months, Mejía became the first known Iraq veteran to refuse to continue to fight in Iraq, citing moral concerns about the war and occupation. He was eventually convicted of desertion by a military court and sentenced to a year in prison.

Mejía currently serves as the chair of the board of Iraq Veterans Against the War, and is the author of Road from Ar Ramadi: The Private Rebellion of Staff Sergeant Mejia: An Iraq War Memoir (new edition, Haymarket Books 2008). In Road from Ar Ramadi, Mejía tells his own story, from his upbringing in Central America and his experience as a working-class immigrant in the United States to his service in Iraq – where he witnessed prisoner abuse and was deployed in the Sunni triangle – and time in prison. In this stirring book, he argues passionately for human rights and the end to an unjust war.