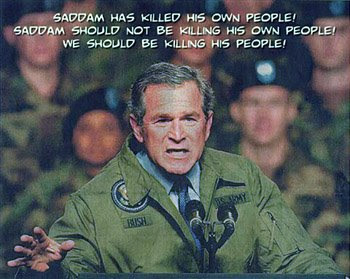 The Canadian government has knowingly allowed the violation of both Canadian domestic law and international human-rights law by failing to stop former U.S. president George W. Bush from crossing the border for a paid speaking engagement with a private Calgary audience.

Many competent international authorities have concluded that the available evidence establishes that Bush and the Bush administration committed torture and other war crimes and crimes against humanity. Therefore Canada now has a duty to condemn, investigate, prosecute and punish those crimes.

Prime Minister Stephen Harper, Attorney General Rob Nicholson and other responsible ministers were notified on March 11 of specific evidence clearly demonstrating there are reasonable grounds to believe Mr. Bush has been complicit in torture and other war crimes.

Under Canada’s immigration laws, if there are reasonable grounds to believe a person is complicit in these crimes, entry to Canada must be denied.

The test is not whether a person has been convicted, but whether there are reasonable grounds to think they have been involved in such crimes.

Even though Canadian officials were referred to the overwhelming evidence of Bush’s involvement in torture government officials apparently took no action to bar Bush or commence an investigation.

In fact government officials did not even feel the need to bother with the courtesy of a reply to Lawyers Against the War (LAW).

LAW plans to consult with peace and justice advocates in Canada and around the world with a view to maximizing the likelihood of successful prosecutions that would be a move toward restoring the rule of law.

Many around the world are pressing for proper prosecutions. In the U.S., release of a major complaint alleging war crimes against 31 Bush administration officials prepared by the Robert Jackson Steering Committee is expected in April.

This initiative is led by Professor Lawrence Velvel, Dean of the Massachusetts School of Law.

A growing number of people completely agree with UN Special Rapporteur Martin Scheinin, who recently said, “We have had a witch hunt for alleged terrorists for the past seven and a half years. . . . Now I think the witch hunt is over and it is time for the law to step in.” Prof. Scheinin also said states are under a positive obligation to conduct independent investigations into alleged violations of the right to freedom from torture or other inhumane treatment.

[John McNamer, 61, is a member of LAW from Kamloops. He was awarded the Bronze Star Medal while serving in Vietnam with the U.S. Army’s 4th Infantry Division.]

2 Responses to Canada Allows War Criminal in to Speak