Cannabis Café : Getting High in Portland 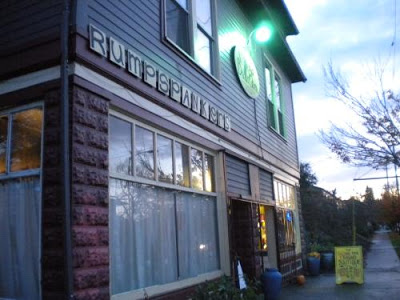 …the cafe comes almost a month after the Obama administration told federal attorneys not to prosecute patients who use marijuana for medical reasons or dispensaries in states which have legalized them.

PORTLAND, Oregon — The United States’ first marijuana cafe opened on Friday, posing an early test of the Obama administration’s move to relax policing of medical use of the drug.

[Actually, according to The Oregonian, it’s the second marijuana cafe; On Oct. 1, Steve Geiger opened Highway 420, a small lounge at the back of his pipe shop at 6418 S.E. Foster Road in Portland.]

The Cannabis Cafe in Portland, Oregon, is the first to give certified medical marijuana users a place to get hold of the drug and smoke it — as long as they are out of public view — despite a federal ban.

“Our plans go beyond serving food and marijuana,” said Martinez. “We hope to have classes, seminars, even a Cannabis Community College, based here to help people learn about growing and other uses for cannabis.”

Members pay $25 per month to use the 100-person capacity cafe. They don’t buy marijuana, but get it free over the counter from “budtenders”. Open 10 a.m. to 10 p.m., it serves food but has no liquor license.

There are about 21,000 patients registered to use marijuana for medical purposes in Oregon. Doctors have prescribed marijuana for a host of illnesses, including Alzheimer’s, diabetes, multiple sclerosis and Tourette’s syndrome.

On opening day, reporters invited to the cafe could smell, but were not allowed to see, people smoking marijuana.

“I still run a coffee shop and events venue, just like I did before we converted it to the Cannabis Cafe, but now it will be cannabis-themed,” said Eric Solomon, the owner of the cafe, who is looking forward to holding marijuana-themed weddings, film festivals and dances in the second-floor ballroom.

The creation of the cafe comes almost a month after the Obama administration told federal attorneys not to prosecute patients who use marijuana for medical reasons or dispensaries in states which have legalized them.

About a dozen states, including Oregon, followed California’s 1996 move to adopt medical marijuana laws, allowing the drug to be cultivated and sold for medical use. A similar number have pending legislation or ballot measures planned.

Pot cafes, known as “coffee shops”, are popular in the Dutch city of Amsterdam, where possession of small amounts of marijuana is legal. Portland’s Cannabis Cafe is the first of its kind to open in the United States, according to NORML.

Growing, possessing, distributing and smoking marijuana are still illegal under U.S. federal law, which makes no distinction between medical and recreational use.

Federal and local law enforcement agencies did not return phone calls from Reuters on Friday seeking comment on the Portland cafe’s operations.

“To have a place that is this open about its activities, where people can come together and smoke — I say that’s pretty amazing.” said Tim Pate, a longtime NORML member, at the cafe.

Some locals are hoping it might even be good for business.

“I know some neighbors are pretty negative about this place opening up,” said David Bell, who works at a boutique that shares space with the cafe. “But I’m withholding judgment. There’s no precedent for it. We don’t know what to expect. But it would great if it brought some customers into our store.” 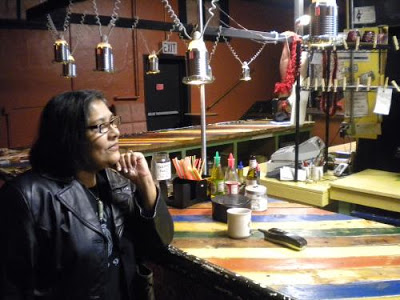 But it was not all cheers outside the grand opening.

“Despite the hype, opening night seemed like kind of a bust,” a blogger with Portland Mercury deadpanned. “As I stood at the back of the line talking with Ian, a long-time cardholder who was up for the idea of a sociable ‘medicating’ environment (‘Do you like to sit and drink in your house?’ he said. ‘It’s nice to get out.’), people kept ditching out from the front of the line, shaking their heads. ‘Why would I want to smoke with a bunch of people I don’t know?’ grumbled an old man in a black cowboy hat, striding away. ‘Save your money and buy a bag!’ shouted a twenty-something dude as he left.”
[….]
The new café is something of a test for the Obama administration’s policy that it will respect individual states’ medical marijuana laws. During his presidential campaign, Obama had promised to stop raids on medical dispensaries that were operating within state law.

“I think the basic concept of using medical marijuana for the same purposes and with the same controls as other drugs prescribed by doctors, I think that’s entirely appropriate,” the president said. 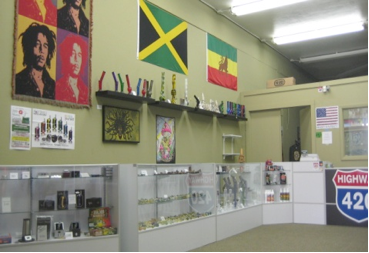 Highway 420 in Portland, which has a small lounge for medical marijuana patients.
Thanks to Mariann Wizard / The Rag Blog

3 Responses to Cannabis Café : Getting High in Portland