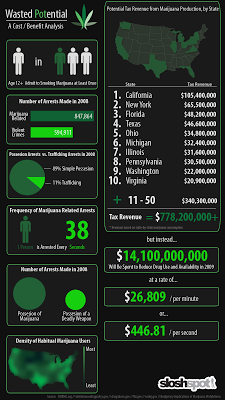 Put that in your pipe and smoke it

Love it or hate it, people smoke marijuana — lots of it. In some states marijuana consumption and possession have been decriminalized, and even legalized for medicinal purposes. But, have you ever wondered how large the economics of Marijuana were? Us too. As a result, we decided to put together this graphic, which illustrates the popularity of marijuana consumption, the federal tax dollars spent to keep marijuana illegal, and the possible tax revenues that could be generated if marijuana production were legalized and taxed like any other agricultural product. — sloshspot

No matter what sort of spin you put on the issue, ignoring the revenue-creating potential of taxing cannabis sales — which will continue, legally or otherwise — hardly seems prudent when we live in an era in which local governments can’t afford to fix potholes or hire schoolteachers. — Brand X

This entry was posted in RagBlog and tagged Cannabis, Chamber of Commerce, Drugs, Economy, Marijuana, Medical Marijuana. Bookmark the permalink.