Can’t Fall On Your Fannie Mae 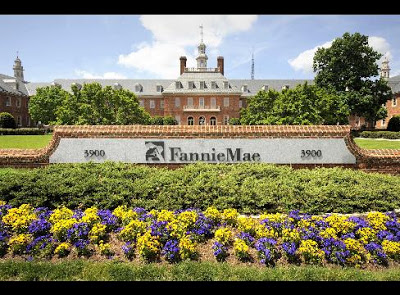 Flowers grow in front of the headquarters of Fannie Mae in Washington. Photo by Ken Cedeno / Bloomberg News.

So lets see if I have things straight. The feds can’t just bail out Freddie and Fannie because that might cause the dollar to collapse. So they can’t do that.

But there is this $1.5 trillion in unprofitable real estate loans so the private investors are bailing out. So its time for the fed to swagger up to the stock market and use its 2.5 billion x 2 = $5 billion default cash accessible to reassure the market.

But the fed is financially out-gunned by a factor of three hundred to one in the cash it can currently use to reassure investors, who probably read the newspapers. So Paulson is begging Congress for bailout cash that could make Bear Stearns look small by comparison.

But whatever it takes, its still worth it because we’re trying to save the dollar, right?

Because if the dollar crashes, then oil might get so expensive we can’t afford to drive to work. Drive to work from the nice suburban homes that we financed with the Freddie and Fannie loans.

Fannie Mae and Freddie Mac, the largest buyers of U.S. home loans, are too big for the government to let them fail, leading Republican and Democratic lawmakers said.

The government-chartered companies, which own or guarantee about half the $12 trillion of U.S. mortgages, can count on a federal lifeline, said Republican Senator John McCain, of Arizona, and Democratic Senator Charles Schumer, of New York.

The remarks by the presumptive Republican presidential candidate and the head of the congressional Joint Economic Committee followed a slide in the firms’ shares to the lowest level since 1991. They indicate Congress would push the administration to use government funds to prevent the companies from failing and threatening a deeper housing recession.

“They must not fail,” McCain said today during a campaign stop in Belleville, Michigan. Fannie Mae and Freddie Mac “are vital to Americans’ ability to own their own homes,” he said at an earlier stop in the state, one of the worst affected by the surge in foreclosures.

Central banks, pension funds and other investors hold $5.2 trillion in debt sold by the companies.

While bondholders can count on a backstop, equity investors can’t expect the government to halt a tumble in the companies’ shares, Representative Spencer Bachus, the senior Republican on the House Financial Services Committee, said today.

Fannie Mae slid 14 percent today to close at $13.20 in New York, down 67 percent this year. Freddie Mac declined 22 percent to close at $8, bringing its slump since the end of December to 77 percent.

Stockholders should be prepared for more “difficulties,” said Kevin Flanagan, a fixed-income strategist in Purchase, New York, for Morgan Stanley’s individual investor clients. “Continued woes, continued difficulties are the expectation, and this is going to take a while to play itself out.”

Freddie Mac owed $5.2 billion more than its assets were worth in the first quarter, making it insolvent under fair-value accounting rules. The fair value of Fannie Mae assets fell 66 percent to $12.2 billion, data provided by the Washington-based company show, and may be negative next quarter, former St. Louis Federal Reserve President William Poole said.

“Markets should be assured that the federal government will stand by Fannie Mae and Freddie Mac,” Schumer said in a statement today. They “are too important to go under,” and Congress “will act quickly” if necessary, he said.

The companies “are playing a very important and vital role right now,” Paulson said in testimony to the House Financial Services Committee. They “need to continue to play an important role in the future,” he said.

Fannie Mae and Freddie Mac “are well capitalized now” in “a regulatory sense,” Bernanke told the panel. Still, the companies, like all financial institutions, need “to expand their capital bases so that they can be even more proactive in providing credit and support for the economy,” the Fed chief said.

The federal government can’t afford to take over all of Fannie Mae’s and Freddie Mac’s operations, because such a move would more than double federal government debt outstanding and “have disastrous consequences for the dollar,” said Joshua Rosner, an analyst with Graham Fisher & Co. Inc. in New York.

Instead, the government could move the companies’ combined $1.5 trillion investment portfolios into a separate limited liability corporation that would gradually liquidate the assets, Rosner said. Fannie Mae and Freddie Mac would still be able to support the U.S. housing market by packaging home loans into securities they guarantee.

The U.S. Treasury, which analysts said would play a central role in any rescue of the firms, currently has the authority to buy $2.25 billion in each of the companies’ debt.

Congress created Fannie Mae during the Great Depression to revive the housing market and formed Freddie Mac in 1970. While a federal rescue is “premature,” Representative Paul Kanjorski said lawmakers should prepare for more trouble.

“I don’t think any of us could anticipate all the contingencies that can happen,” said Kanjorski, a Democrat from Pennsylvania. “We recognize that we’re in very dangerous waters, very stormy. We should have contingencies.”

“The government should not be supporting the system as is,” said Hensarling, of Texas. Fannie Mae and Freddie Mac are a “government-sanctioned duopoly” that “no longer helps the market in the way that it once did” while posing “a huge systemic risk” to the economy.

Investors should heed Ofheo’s comments, said House Financial Services Committee Chairman Barney Frank, a Massachusetts Democrat. “I would hope that people would not react to a sense of panic or whatever and would look at the reality and that we’ll be okay,” Frank told reporters.