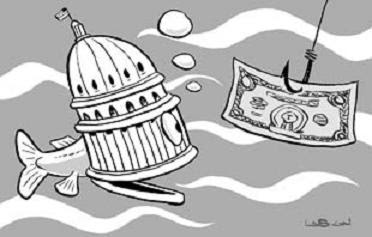 While nothing that happened in Washington this past week was new or should have surprised anyone, we were nonetheless served clear notice, anew, that this is a democracy under siege.

In one week, Congress authorized one hundred and sixty two billion US taxpayer dollars to extend for another year the illegal and immoral occupation of Iraq, and rewrote federal law to specifically pardon criminal actions by the nation’s largest telecommunications companies. No one really noticed that a retired US general bluntly accused the Bush administration of war crimes. He could just as easily have accused Congress of the same. They are just as guilty

It has been reported in our publication and elsewhere that Democratic Congressional leaders sought to address the issue of war funding as quickly as possible. Some in Democratic leadership feared that the issue might prove a burden in an election year. A political consideration. In the end, Democratic leadership accelerated, without significant opposition, the pace at which the latest war funding bill was brought to a vote. It passed well before it was required and well before the fall elections. The die is cast, the nation is committed to another year of bloody war and all of its crimes, so that we can vote for the leaders who took this action without having to think about it.

In December 1974, Seymour Hersh, writing for The New York Times, revealed that the Central Intelligence Agency (CIA) had, under orders from Nixon, violated its charter and engaged in warrantless domestic spying on American citizens, on American soil. The practice Hersh pointed out had been going on for years. Hersh’s report led to the creation in April 1976 of the Church Committee, named after its chairman, Senator Frank Church, a Democrat from Idaho. The Church Committee reports, which should be required reading for all Americans, detailed systemic warrantless domestic spying on and surveillance of Americans by a host of federal government agencies including the CIA, the IRS, the US Postal Service and the National Security Agency (NSA).

As a result first of Hersh’s story and the subsequent findings of the Church Committee, Congress passed the Foreign Intelligence Surveillance Act of 1978, (FISA). FISA’s express purpose was to make illegal presidential directives that would authorize warrantless domestic spying. It might just as well have been called the Nixon Act because it was a direct consequence of his Stalinesque abuses. FISA worked well for roughly 23 years.

Enter George W. Bush and Richard B. Cheney, et al. Essentially Bush, Cheney, their families and allies are monarchists, autocrats and on occasion, when they feel the need arises, fascists. They have little patience with Democratic process, and less patience with Congressional interference. In short, to the Bush crew FISA was an insult. They deliberately and knowingly broke the law, directing the NSA to employ its electronic surveillance capabilities on American citizens on American soil without warrants, and enlisting successfully the aid and comfort of most of the nation’s largest telecommunications companies in the illegal effort.

The Bush administration argues that it did so to protect Americans after 9/11. That argument is flawed for two reasons. First, all statutes that prohibit warrantless domestic spying point out specifically that such restrictions are not to be dispensed with due to – any – immediate threat, including national security, except as specified by law. Second, there is significant evidence that authorization for warrantless domestic spying came from the Oval Office well before 9/11.

Who, then, will confront those who would break the law under cover of executive privilege? Congress, of course, is designated under the Constitution to address violations of law by the executive branch. But not this Congress. This Congress, handed a sweeping mandate with one of the largest nationwide electoral victories in US history, a mandate from the American people for confronting massive illegality at 1600 Pennsylvania Avenue, this Congress has utterly abdicated. This Congress has not only abdicated; it has capitulated and conspired to circumvent the Constitution. That is the FISA legislation that this Congress has passed. The war funding legislation is worse; it is authored in innocent blood and unending human suffering.