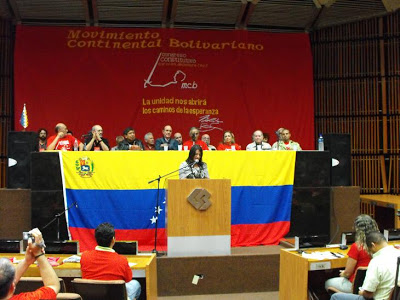 CARTAGENA DE INDIES, Colombia — Students, workers, peasants, indigenous movements and leftist groups from 30 countries gathered at Caracas last week to found the Movimiento Continental Bolivariano (MCB), seeking a “union of the peoples of the Americas” to oppose “imperialist encroachment,” according to organizers.

Under the motto, “Take the open road of hope,” a quote from the Liberator, Simón Bolívar, the founding congress of MCB on Monday, December 7, expressed determination to “defend the Venezuelan Revolution against imperialists threats,” and “strengthen the fight against the military bases the Yankees have established in Colombia”; this last refers to a recent agreement between Bogotá and Washington allowing U.S. troops to operate in seven military bases in the South American country.

During the meeting, which ended Wednesday, a video of “Alfonso Cano,” the nombre de guerra of a leader of the Fuerzas Armadas Revolucionarias de Colombia — Ejército del Pueblo, (FARC or FARC-EP; Revolutionary Armed Forces of Colombia — Peoples Army) was shown. In it, Cano said that adopting a constitution for MCB is a “duty that cannot be postponed,” and reiterated that the pact between Colombia and the U.S. will “destabilize” democratic processes in Latin America.

“[MCB] constitutes a continental political movement of Bolivarian essence, just when the American empire has deployed its military strength in Colombia and is threatening democracy. The U.S. now has its equipment of war and terror deployed against the Latin America and Caribbean peoples. Formation of the new group and adoption of its constitution is a historical necessity” wrote the fugitive guerrilla leader.

He added that MCB’s formation signals a new dawn of South Americans’ defense of their dignity, independence, history, values, culture, territory, human resources, and a “natural and inalienable right to a sovereign design of our rich future.”

The Venezuelan Continental Movement (VCM), born more than five years ago, will provide a founding structure, expanding to include a Bolivarian Continental Coordinator (BCC) to represent MCB, as a platform for Latin American anti-imperialism.

The Commander of the armed forces of Colombia, General Freddy Padilla de León, requested the group to publicly reject the greeting message and accusations of the FARC.

Colombia has formally asked Venezuela to clarify its position towards the MCB. “The Government and the people of Colombia consider the recognition made by the Bolivarian Continental Coordinator (BCC) of the narcoterrorista organization ‘the FARC’ an affront to democracy and human rights,” the Ministry of Foreign Affairs said. Colombia stated that the MCB is guaranteeing, by its acceptance of the FARC, the murders, kidnappings, and atrocities against civilians committed by the rebel group in a civil war that has lasted over 45 years.

“Faced with this recognition, the Government of Venezuela should clarify to the international community if it recognizes, adopts, or tolerates the existence of movements or parties that support terrorism and that make apologies for organized crime,” the Colombian government said.

Colombia registered its protest while diplomatic relations with Venezuela are already in crisis, following the latest U.S. military pact.

The current diplomatic crisis is considered the worst since 1987, when the two countries, sharing a land frontier of 2,219 kilometers, were on the brink of war after a Colombian warship was intercepted by the Venezuelan army in a disputed maritime border area.

Previously, Colombian military and political leaders have asked the international community to refrain from giving credibility to FARC in forums such as the meeting in Caracas.

“We cannot accept that, after we have achieved significant success in the tranquility and peace among Colombians, these organizations of pseudopolíticans should give exposure to terrorist organizations,” said General Padilla.

The President of Venezuela, Hugo Chávez, the leading regional critic of Washington, denounced the U.S. as building a platform on Colombian foundations to invade his country and curb his so-called “Bolivarian revolution” that favors the poorest members of society.

Chávez, in the past has denied links with or support for the guerrillas, charged by his opponents, and denied that they use Venezuela as a sanctuary.

In the FARC video shown in Caracas, Cano rejected the military accord of Bogotá and Washington and announced FARC’s support for the newborn pan-South American organization.

The video is the second from Cano, who assumed the position of maximum FARC leader in 2008 after the legendary Manuel Marulanda Velez, died of a heart attack.

In recent months, guerrilla forces have intensified their attacks in an apparent attempt to demonstrate military power and political force. An offensive (Plan Patriota), launched by the Uribe government in 2003, that forced the FARC into a strategic retreat to remote mountainous and forested areas. In that offensive, several important guerrilla leaders such as Raúl Reyes, Martin Caballero, and Tomás Medina Caracas were killed, while thousands of FARC combatants defected, according to the Colombian Government.

3 Responses to Caracas : Bolivar is Inspiration for New Peoples’ Movement in Latin America