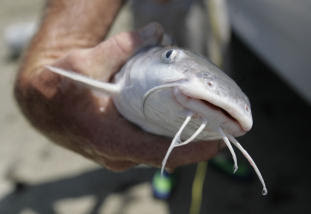 Catfish, like this one caught Tuesday by Mark Arnett of Alvarado, are now on the state’s consumption warning list. Photo by Julio Cortez / Houston Chronicle
Texas issues health warning on some Galveston Bay fish
By Allan Turner and Rosanna Ruiz / July 9, 2008

Texas health officials Tuesday issued a stern warning against unlimited consumption of speckled trout and catfish from Galveston Bay, saying that high levels of industrial pollutants found in their fatty tissue have been linked to learning difficulties in newborns and cancer.

The advisory marked the first time that the Texas Department of State Health Services warned against eating fish caught in any portion of the bay. Earlier warnings dating to 1990 had addressed concerns about fish or crabs taken from the Houston Ship Channel or the bay’s upper reaches.

Adults should eat no more than eight ounces of the fish per month, said health department spokeswoman Emily Palmer. Children, nursing mothers and women who are pregnant or might become pregnant should not eat the fish at all.

A two-year study of fish caught at 10 sites in the bay found significant levels of PCBs (polychlorinated biphenyls) and dioxins in the fish. Flounder, red drum and black drum were found to be safe. Swimming in most of the bay isn’t considered dangerous.

Fishing guides expressed concern that the warning will harm the bay’s sport fishing industry, which, one said, is heavily dependent on people who intend to eat their catch. Galveston Bay attracts about half the money spent for recreational fishing in Texas.

“This will have a tremendous impact on the whole area — fishing guides, restaurants, motels,” said longtime fishing guide Bob Leonard. “People come down here to Galveston and Kemah to go fishing.”

All of his clients, most of whom live with a 100-mile radius of Houston, fish for food.

Leonard said he’s eaten the fish for 50 years and is “healthy as a horse.”

“I think certain people are just more susceptible,” he said. “It’s certain you’ll get sick if you eat too many grapes, too many oranges. A scare like this … could be the economic downfall of the whole coast.”

Fishing guide Lynn Waddell said many of his customers are trophy fishermen, who release their catch.

“I’m going to wait and see what happens,” he said of the new warning, adding that, as a matter of policy, he warns clients about eating fish from the upper portions of the bay. “I never let them keep those fish. I’ve caught some pretty strange fish up there.”

Health authorities are worried about the impact of eating contaminated fish on those who routinely supplement their diets by fishing — a group estimated at 10 percent of licensed fishermen.

“It’s not a matter of one meal is going to make you sick,” said Kirk Wiles, manager of the health department’s Seafood and Aquatic Life Group. “The concern is for eating large amounts over a long period of time.”

Generally older, larger fish tend to be more heavily contaminated. The recent study found some younger, smaller fish that were significantly contaminated. Contaminated fish were found in all sections of the bay, a phenomenon Wiles said suggests fish migrate freely throughout the bay.

PCBs were commonly used as coolants and lubricants in electrical equipment. Although the Environmental Protection Agency banned PCBs in 1979, equipment containing them was not recalled. The chemicals have been linked to cancer and reproductive, immune system, developmental and liver problems.

Dioxins, unwanted byproducts of a number of chemical processes, have been linked to skin rashes, liver or reproductive damage and cancer.

Both contaminants degrade slowly in the environment.

Despite the pollution, Helen Drummond, director of the Galveston Bay Estuary Program, said the quality of Galveston Bay’s water is “generally good.” The estuary program is a consortium of conservation groups, government agencies, scientists and businesses administered by the state.

“We found most of the contamination in the tributaries and specific areas,” Drummond said. Forceful currents flush the bay of pollutants, she said, although bay sediments may contain problematic chemicals.

Tuesday’s warning was an extension of earlier advisories that urged limited consumption of crabs and certain types of fish from the upper bay, Houston Ship Channel and portions of Clear Creek.

Anglers seemed to take the warning in stride.

“We don’t eat any of the fish. We fish for sport only,” said Evelia Fernandez, who was among those lining the Texas City dike Tuesday.

And at Curl’s, a bait shop in the 1400 block of Dike Road, employees had not heard about the warning. Clerk Mary Hernandez said she frequently dines on bay catfish.