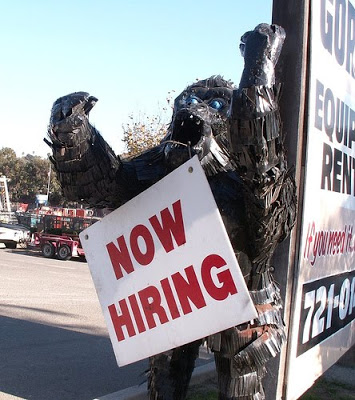 Employment trends for a post-widget world

AUSTIN, Texas — Let’s face it, friends: the U.S. of A. is not going back to making widgets anytime soon.

Not even the deepening economic crisis has had any effect in moving us towards an economy that produces material goods for trade; if anything, it has demonstrated that in general, Americans would prefer to become subsistence farmers, or even roving hunter-gatherers, rather than go back to factory work.

So be it. In the Future, unique communitarian ecotribes will rule. Yum, yum, acorn meal!

But there seems likely to be a lengthy and bumpy transition period, and I worry about the welfare of those now between the ages of two and 20, who are most likely to experience the full transitional mood swings to come.

I like to help young folks, and I’ve come up with a short list of potentially rewarding near-term future careers. Kids, while you’re learning to pickle beets and/or raise milk goats, consider summer jobs or internships in the following growth areas:

1. Celebrity stalker. Pick of the crop, really; “it’s in the stars!” As the number of celebrities grows exponentially, so does the need for stalkers. Tasks include writing crazy love or hate messages, lurking around celebrities’ homes or hangouts, and making up bizarre alternate histories in which you and the celeb were married last year on Triton, or exchanged identities while in kindergarten. This position requires enthusiasm, spontaneity, a poor command of logic, and most of all, people skills.

Remuneration varies, and until a new national union of celebrity stalkers gets its legs under it, is likely to be spotty. Best bet so far: getting a lump sum settlement after having the crap beaten out of you by celebrity bodyguards.

2. Like outdoor work? Street riot tactician is bound to be an up-and-coming occupation as economic woes spread! Mobile combat paramedics and, for you more authoritarian kids, FBI informer, should also see continued growth. Tip: for best success in this fast-moving area, learn a second language well enough to appear to be an immigrant if that seems advisable. A theatrical flair is a big plus: you have to be able to project your voice to be a really good street commando!

3. Another outdoor job we’re seeing a lot of these days is sale sign holder. It doesn’t have to involve a costume anymore!!! No-credit-check cell phone companies, quick oil-and-lube shops, and retailers in trouble are resorting to person-with-a-sign-standing-on-the-curb advertising with surprising frequency. It may look good on your resume, but I’m not optimistic about the long-term outlook for this position — after all, it depends on those small businesses being in business! Bottom line: summer job or moonlighter. And if you can handle the costume, tax season officially kicks off on the first of the year, aspiring “Uncle Sams” and “Statues of Liberty” should be out there now putting in applications. Note that this job actually pays, maybe in free tax return preparation; maybe in tacos, but it pays.

4. Speaking of tacos, the proliferation of fast-food trucks around town is leaving us wondering when we’ll begin to see the first big-time, hip-fashionable reviewers of mobile fare — you know, people whose tweets matter! This should be good for at least a few meals — and say, can you tell me about the food truck sushi on Manor Road? Is it really fresh?

5. Finally, I’m going to suggest dusting off an oldie-but-goldie for the End Times Ahead: perpetual student. The return of Pell grants and continuing economic pressure for extended adolescence may portend a return to the carefree days of the mythic Sixties — minus the free love, of course; again, sorry about that, kids! — when one could change one’s major six or seven times, getting ever-so-close to graduation each time, before being actually forced to choose a lifepath. Instead of overgrown state universities, look for community colleges and alternative institutions — such as the new cannabis colleges sprouting in California, Michigan, and no doubt soon in a state near you — to be venues for a new rash of prolonged educational detours. Study anything they’ll pay you to study; little of it will prove useful once you leave school, but if you learn it well enough, you can teach.

For longer term opportunities, think about preparing for work as a draft counselor (it’s coming, dearies!), a Seventies re-enactment stunt person (disco will be played!), or applying for membership on your local death panel. The main thing to remember is that every generation has its own challenges, and for every disappearing job category — such as, “employed” — there’s something new right around the corner. Re-use, re-train, re-volt!