Carl Davidson and Harry Targ :
In State of the Union, Obama pulled his best punches

The speech reflected the fact that Obama is ‘back in the game,’ but things still aren’t looking good for most of us. 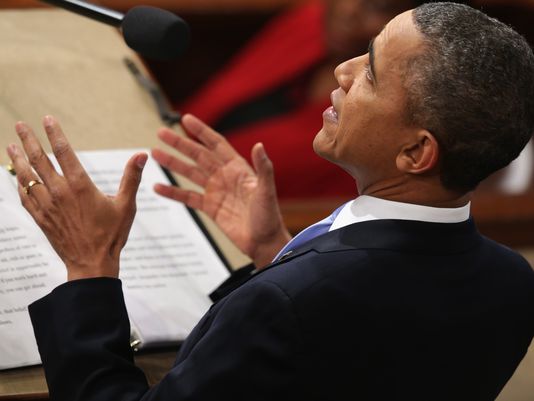 In the lead-up to President Obama’s speech Chris Hayes, MSNBC host, presented a segment on the national mobilization of low wage workers in 2013. He described courageous work stoppages by fast food workers, campaigns by public employees, particularly health care and home care workers, and how seemingly isolated pockets of protest spread like wildfire across the nation.

This, Hayes suggested, stimulated progressive groups, selected Congresspersons, and visible pundits such as Robert Reich and Paul Krugman to reemphasize the economic crisis the American working class is facing, particularly youth, people of color, women, and older workers. Hayes suggested that we are on the verge of a new mass movement and that Obama would capture the spirit of this movement in his State of the Union address.

President Obama took the podium a little after 9 p.m. (EST) and presented a State of the Union address that referred to income inequality, the need for immigration reform, creating jobs by renovating the transportation infrastructure, and reducing greenhouse gas emissions to forestall climate change.

Specific resolutions and demands were articulated. He did announce that he would use his executive authority to require that the minimum wage of companies with government contracts be raised to $10.10 an hour. He urged Congress, states, and municipalities to follow and raise their minimum wages as well.

He recommended the creation of a new program that would allow workers who do not have pensions to invest in a government created pension fund, similar to 401Ks.

He praised growing government business partnerships and collaboration with colleges and universities to extend job training, make college more affordable, and create a 21st century workforce that he claimed could fill the jobs that are not being filled now.

Finally, while vowing to continue national security policies (including in not so many words a “war on terrorism”), he announced he was committed to bringing almost all troops out of Afghanistan by the end of 2014. He promised to support certain sectors of the Syrian opposition and remain ready for military action but was committed to negotiations now with Iran, Syrian factions and Israelis and Palestinians to end their bitter conflicts.

He declared, however, that he would veto any Congressional bill that came across his desk that called for increased sanctions against Iran, now during the difficult negotiation process with that country. He pointed out in perhaps his most significant statement, that the Obama administration would lead the United States away from “a permanent war footing.”

In addition, in list-like fashion he called for equal pay for equal work, full and unfettered access of all to vote, the closing of the prison at Guantanamo Bay, and increased attention to veterans benefits.

His most sustained applause came after he introduced a marine sergeant who had served 10 assignments in Afghanistan and was partially disabled as a result of stepping on a land mine in his last assignment.

As Chris Hayes pointed out, there was a clear contradiction between the horrific circumstances surrounding the physical devastation the Marine experienced and the applause it engendered from the assembled Congress people versus the tepid applause the President received after declaring his opposition to staying on a war footing.

The Marine lost a limb, was half blind, could barely speak, and suffered visible cosmetic damage to his body, Hayes argued, precisely because the United States is on a permanent war footing that most politicians support.

In total, the speech reflected the fact that Obama is “back in the game,” but things still aren’t looking good for most of us. The president tilted back to the center-left a bit, and reminded his base why many gave him a vote over McCain and Romney.

As suggested above, Obama vowed to veto the effort of the current bipartisan 60-member “war party,” backed by AIPAC, to sabotage negotiations with Iran in favor of military confrontation there straightaway. He also declared that the Afghan war would be ended this year, with one caveat of a residual training and anti-al-Quaeda strike force possibly remaining. But all the rest of foreign policy matters were well within the bounds of Empire-as-usual.

On the domestic front, his policies represented just modest Neo-Keynesian responses to capitalism’s crisis, while rejecting the do-nothing GOP neoliberalism of the right.

On the domestic front, his policies represented just modest Neo-Keynesian responses to capitalism’s crisis, while rejecting the do-nothing GOP neoliberalism of the right. To break the deadlock imposed by the GOP House, he vowed to go around Congress with executive action where possible — raising the minimum hourly wage of all workers under federal contracts to $10.10, adjusted energy policies, new retirement bonds from the U.S. Treasury, and so on.

None of these could pack enough clout, however, to do what clearly needs to be done, a massive public works and full employment program in the form of a Green New Deal, defense and expansion of Social Security and the safety net, and powerful employment and training opportunities for the inner cities.

There were a few good ideas about connecting community colleges with job markets, but he still clung to a muddled educational policy favoring charter schools and limiting the ability of teachers to do their jobs well.

He made powerful rhetorical appeals for women’s rights, with an eye to the GOP’s “war on women” weak spot, but had little to say about the need for a stronger union movement to raise wages and improve conditions across the board. Instead, he just appealed to the bosses to “do better.” He was silent on curbing finance capital.

Chris Mathews, another MSNBC pundit, characterized the speech as a “center/left speech” designed to appeal to the “center/right.” In this sense, the President was not speaking to the masses of working people, shown in the Hayes vignette on workers in protest, who have begun mobilizing to demand increased wages, the right to form unions, health and safety at the workplace, health care for all, and a real jobs agenda that would not continue the downward spiral of the environment.

The job of progressives remains: helping to give voice to those who have hit the streets; demanding that our politicians join them, not the right-wing and Wall Street factions. We need to continue our struggles and work with others to raise the minimum wage and extend jobless benefits.

And, ultimately those of us on the left need to more loudly offer an alternative to the Neo-Keynesian policies articulated in the State of the Union with a compelling message that “another world is possible.”

[Carl Davidson is a co-chair of the Committees of Correspondence for Democracy and Socialism (CCDS). Harry Targ is a Professor of Political Science and is a member of the National Executive Committee of CCDS. Read more articles by Carl Davidson and Harry Targ at The Rag Blog.]