Carl Davidson : Mondragon Diaries II: It Starts With a School 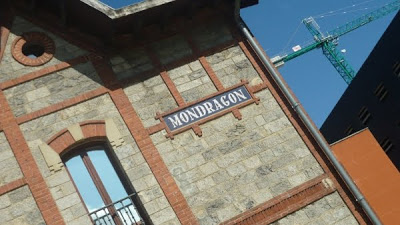 Mondragon Cooperative Corporation in Basque Country. Image from PermcultureCooperative.
Mondragon Diaries, Day Two
It starts with a school:
Knowledge and the path to workers power

[This is the second of a five-part series by Carl Davidson about the Mondragon Cooperative Corporation, a 50-year-old network of nearly 120 factories and agencies, involving nearly 100,000 workers — centered in the the Basque Country but now spanning the globe. Go here for “Mondragon Diaries I: Bridges to Socialism.”]

BASQUE COUNTRY, Spain — This bright and sunny morning in the Basque Country mountain air again begins with our bus slowly winding up the mountain slopes. But this time it’s a short ride. We stop at ALECOP, a unique worker-student cooperative that is at once part of Mondragon’s production units and its educational system. Think of it as a small worker-owned community college, but with technology shops that actually produce items for sale in industrial markets, and you won’t be far off.

Once we get settled in a classroom, our MCC mentor, Mikel Lezamiz, introduces us to a young 30-something worker-technician who is going to explain ALECOP to us, and a good deal more.

“First of all, we are a mixed cooperative,” he states. “This means we are made up of both worker-owners and students. There are 59 worker members and about 300 student members. Some of our students also work in other coops part-time, but our students are mainly working as part of their studies, and to earn a little money to support themselves as students.”

He goes into some history, reminding us that MCC started back in the 1940s, with the polytechnical school started by Father Arizmendi, the innovative priest who envisioned MCC, as his very first effort to help the war-torn Basque workers find a path out of the devastation of World War II. The first school’s students helped form the first factory, but the school also continued, and over the decades, it evolved into what is now ALECOP, several more coop high schools, and what is now Mondragon University.

“To democratize the power, we have to share the knowledge,” interjected Mikal, summarizing Arizmendi’s theories. “Thus continual study throughout life must not only be for the rich, but also for the workers.”

What kind of jobs do the ALECOP students have? Our young guide shows us a list: R & D assistant, storekeeper, publisher, process technician, electronic assembler, and several others

What kind of products do they make? “Most important, we design educational tools, to help in teaching electricity, electronics, automation, telecommunications, and other subjects needed in high schools and in factory training. But we are also a nonprofit. We make money, but our hope is mainly to cover our expenses. He goes on to describe a list of ‘competencies’ that they hope to instill in the students, so they can go to work in FAGOR or other MCC factories with a good degree of skill.

It all becomes much clearer once he takes the 25 of us out into the shop area. As someone who taught computer repair to inner city youth and ex-offenders by recycling old computers, I step away from the group and examine some of the teaching stations. 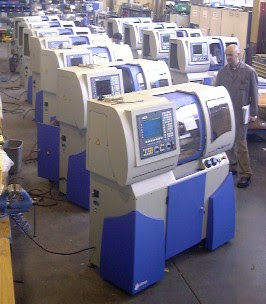 Teaching stations at Mondragon worker-student cooperative. Image from The Syndicalist.
They are large panels with, for example, critical automotive parts on one side, connected with various testers and gauges. I examine the back side and find the motherboards and circuitry connecting them all. A student who wanted to become an auto mechanic, for example, could test and work through the key components of dozens of vehicles on the front side, while the programming embedded in the back side would give him or her the proper positive or negative training responses.

Very cool, I thought. Even cooler was the fact that the students not only used these machines for their own learning, they also made the circuit boards and wrote the software to make these instructional learning tools in quantity, ready to be sold and used anywhere.

After ALECOOP, our bus makes a quick stop at Mondragon University’s top-line coffee bar. We’re in a hurry, so Mikel gets busy: How many with milk? How many black espresso? He turns in the bulk order, and with our caffeine fixes, we’re back on the road in 20 minutes.

The late morning session is at Mondragon Assembly, a mind blowing and thought bending state-of-the art high-tech and high-design worker cooperative competing on a world scale. Its products are the software and hardware of room-sized automatic assembly machines making solar photovoltaics and many varieties of electronic components for robotics.

“It’s rather easy to design a machine that can make a switch or solar cell every 1.8 seconds,” explains a young coop member. “But it’s very hard to make the same switch or cell in 1.2 seconds. Yet that is what our clients are demanding of us, and it changes every six months, with higher and faster standards. We either do very well, and make lots of money for the cooperative, or we fail and we lose a lot.

“But this is what we want to be doing,” he adds. “We don’t have too many workers in this coop in the 40 to 55 age range. We’re all younger. Some say we try to make up in attitude and spirit what we lack in experience!” This brings a round of laughter, but we all know exactly what he means. He goes on to describe the global market for these advanced means of production, with China leading the way in many of them.

“We can’t just produce for the Basque Country, or even Spain and Europe. We have clients everywhere, and we are setting up factories everywhere — Germany, Mexico and China, too.” While owned by MCC, none of these abroad are yet full worker-owned coops. But neither are they sweatshops; they are very advanced production units with skilled workers.

Still, it is a contradiction, and MCC’s aim is to eventually convert them all to cooperatives. But they have to move in accordance with the host country’s laws and customs on the matter. Or simply make the decision to abandon proposed startup projects in that region to other regular capitalist firms.

How are his clients spread around? “Right now, we have 85 here in Spain, 30 in Mexico, 25 in France, six in China and 20 in Germany. For this kind of equipment, you don’t get a large number of orders. Maybe 10 a year. But each one is worth millions, but only if we are successful! But keep in mind that for every two jobs we create globally on the outside, we also create one new job here inside MCC.”

As we left, many in our group were debating the pros and cons of global economic justice. I shared their concerns, but I also saw something else. Here were the beginnings of some of the most advanced productive forces in the world, the means of both economies of abundance and the means of clean and safe renewable energies and far lighter ecological footprints.

n any dynamic socialism of the 21st century, these young people and their creative efforts would be invaluable. I would want to shape their boundaries, but I would not want to stifle them or just send them off to work for the neoliberal globalists. We needed them with us.

As is the custom in this part of the world, our main meal was a long mid-day “lunch,” really a dinner. We were driven higher up into the mountains on a winding road to an immense building that looked like a blockhouse or small fortress of stone. “When was it built?” someone asked. We checked the carvings, and translated. Around 1400 to 1500, before the time of Columbus. But now it was updated into long stone-walled dining rooms, with a conference center on the upper floors. Needless to say, lunch was exquisite and Basque cuisine deserves its reputation.

In our last session for the afternoon, Mikel gives us all a detailed technical talk about cooperative structures, how they can vary, and especially, how they are financed and governed.

This is part of Father Arizmendi’s 10 principles, which he presented yesterday. “Labor is sovereign” is one of them. “This means one worker, one vote — whether you have more money or less or anything else, it doesn’t matter. You have an equal voice and the access to knowledge and transparent information.

It’s the whole of humanity that matters most.