Maddow did a good job of posing open questions and trying to get decent answers. 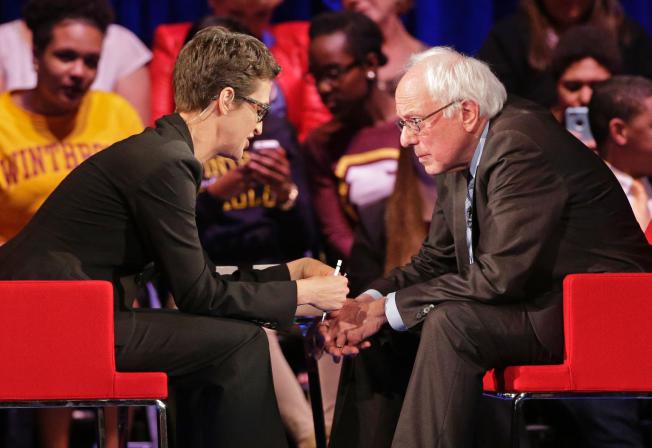 Listen to Thorne Dreyer’s Nov. 6, 2015 Rag Radio interview with Carl Davidson, who helps us make some sense out of all the political madness, here:

As advertised, it was a forum not a debate. I’m talking about MSNBC host Rachel Maddow’s November 6 interviews in a South Carolina auditorium with Martin O’Malley, Bernie Sanders, and Hillary Clinton, in that order.

The event lasted two hours, with some 3,000 people in the room.
Unlike the GOP spectacle-debates, few sparks flew, no “gotcha” questions were posed, and no personal insults were hurled. And Maddow did a good job of posing open questions and trying to get decent answers. Only with Hillary did she seem to lose some control and allow herself to be put in a passive situation.

Of the three, I think Sanders did the best. He answered every question, and used the opportunity to go deeper. He spelled out differences without making it personal. He was at his best in drawing the lines of class struggle, of the 90% against the 1%. He made a strong appeal to the Black electorate, who are half of the Democrats in the state.

Sanders didn’t shy from breaking with Obama on putting new ‘boots on the ground.’

He didn’t shy from breaking with Obama on putting new “boots on the ground” in Syria and elsewhere in the Middle East. Instead, he made a strong case for regional collective security, arguing that the defeat of ISIS was largely a task to be taken on within the Islamic world.

His one weak spot in the liberal context of the discussion was on gun control, but he managed to turn it to his advantage. He supports nearly every common sense measure to restrict firearms from those who shouldn’t have them as do the other candidates. But he made the case that his minor exceptions to their views put him in a stronger position to build a wider progressive consensus among the general population.

O’Malley had a difficult task, trying to position himself to the left of Hillary but to the right of Bernie, as an “FDR Democrat,” suggesting Hillary was too tight with Wall Street while Sanders, as a socialist, was too independent. His best line was aimed at Donald Trump, asserting that we, as a country, are better represented by the Statue of Liberty than by barbed wire fences. But he couldn’t make a decent case as to how he might rise above single digits.

Hillary came off as the polished politician, pressing all the right buttons.

Hillary came off as the polished politician, pressing all the right buttons, and going on at length, drawing out answers in a way that didn’t add much. She denied she was more of a “hawk” than Obama, but not very convincingly. Her answers about how she would use her Wall Street ties to deliver lectures against misbehavior in high financial circles caused me to laugh out loud.

But Bernie unleashed the highest degree of passion for the night when he took on GOP governors as “cowards” for attempting to restrict access to voting. He argued for automatic registration of all citizens at the age of 18, and called for wider mass participation in the political process, as evidenced in his own campaign.

The next round of the GOP debates comes up Tuesday, but it promises to be more of a freak show than even those in the past.

Read more articles by Carl Davidson on The Rag Blog.