Carl Davidson on Bitterness and Hope 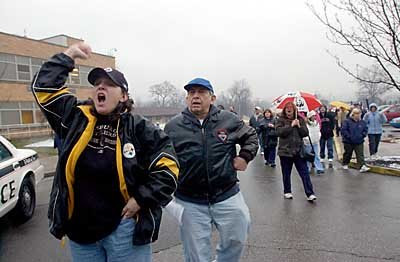 Hospital workers in Alquippa, PA, hit the streets over mass firings.
The Real Elitism of Clinton-McCain:
‘Bitterness,’ Hope And Obama In Western Pennsylvania
By Carl Davidson / April 14, 2008 / The Rag Blog

When I heard Hillary Clinton and John McCain claiming, against Barack Obama’s recent observation, that there was no ‘bitterness’ among working-class voters in Western Pennsylvania, I burst out laughing, ‘they’ve got to be kidding!’

Unfortunately they weren’t, and now the cable news punditry and right-wing talk radio has a new diversionary cause of the week to dump on Obama in lieu of serious discussion of policy and programs.

I’m born and bred in Beaver County, Western PA, which, in 1960, was the most blue-collar county in the entire country-steel, strip mines, and everything related to both. My grandfather died in the mill, Jones & Laughlin Steel, crushed by a crane, and another cousin met the same fate a few decades later. My parents are both in the Pennsylvania Bowlers Hall of Fame (and Barack would do well to stick to basketball!). After a long stint in New York City and Chicago, which were irresistible in my youth, I’m now back home, living in Raccoon Township.

Take it from me. There are a lot of bitter voters in these mill towns and the townships outside them. If they don’t express it to the coiffured media, they do to each other. It’s easy to see why. The towns are mostly empty, ravaged by deindustrialization. And the brown fields where the mills once stood are so poisoned grass won’t even grow. After sitting empty for years, the first new structure to go up not too long ago on one near here was a new prison.

Does this mean it’s a clear path for Obama? Not at all, it’s a rough climb, full of difficulties. But he’s doing better than anyone expected. None of the polls are that trustworthy, because some tell the pollsters the ‘right’ answer, while others, such as new youth voters with only cell phones, are hard to find. Obama’s closing on Clinton, now by a five point spread. The more people see him, the more they like him. But both Democrats run neck-to-neck against McCain in November. This is not a ‘safe state’ for anyone, anytime.

‘White male identity politics’ is the unpredictable elephant in the room. I’ve talked with older blue collar voters who claim John Edwards was their runaway favorite, but are now leaning to John McCain, in spite of their hatred for the war. White workers generally split three ways, roughly proportional, between the three candidates.

Younger working-class voters, male and female, white or Black, are not so caught up in it, and they are Obama’s ace-in-the-hole. If his campaign can get them to the polls in droves, he can win it. That’s the long and short of it, and if you can get here to help, please do so. Everything counts.

The bitterness runs deep, favors no single candidate, and comes in several varieties. Retired steelworkers here had their pensions stolen by speculative capital, winning only part of them back by hitting the streets. There’s also another kind of bitterness in Pennsylvania’s demographics. It’s now one of the oldest population areas in the country. My young nephews and nieces, even with some local college degrees or courses behind them, have a hard time finding work. Many young people have moved away to Florida or California, leaving older relatives behind. Here in Raccoon, they’re now shutting down the elementary school, claiming 500 pupils doesn’t justify the expense to keep it open. It means an hour on the bus for youngsters from a perfectly good school, and, yes, many parents are bitter.

Aliquippa is the nearest town to me, known as home of Mike Ditka and Tony Dorsett. In my youth, it was a bustling blue-collar town of 20,000-some 10,000 workers in the mill, a mixture of Serbs, Italians and African-Americans. Now it’s down to 6000, mostly poor and Black. They were the hardest hit of all, lacking the rural family homesteads to fall back on. Now joblessness, crime and addiction take a very bitter toll on the families still there, with nowhere to go.

Does this mean it’s all bleak? No, not at all, although Hillary Clinton is just dissembling, or worse, to assert that there’s no bitterness, only resilience and hope, in these towns. People here like to pull themselves up independently whenever they can, like the Scots-Irish and Germans who predominated here in the 1800s. Their class solidarity means they’ll accept a hand-up, and offer one, too. But they don’t like hand-outs at all, unless you’re at death’s door, which is why their anti-‘Fat Cat’ populism also contains antipathy to some features of liberalism. It’s also why Obama gets a standing ovation when he tells college students he’ll help, but challenges them to give back, with community service work.

This blue-collar populism runs the political gamut-left, center and right. You can get colorful examples in the hot debates in the interactive pages of the online edition of the largest daily paper, the Beaver County Times. Pick any topic or candidate-you’ll get fierce denunciations of the rich man’s war for oil, combined with warnings against Hillary’ ‘socialism’, claims that Obama’s a secret Muslim, and despair that McCain’s a clone of Bush.

In this lively public square, Obama or any candidate would do well to discern the main themes. Don’t get me wrong. People here are open and friendly. They don’t expect you to agree with them, or vice versa. But they do expect authenticity, so when you get out organizing, speak from the heart, and don’t put your head higher than anyone else’s, and expect the same in return.

At the top of their list is stopping the war now, since it’s preventing any solutions to anything else. Next, do something about health care-single payer is best, but either Obama’s or Hillary’s plan rather than nothing. Then debt relief and fuel prices, although no miracles are expected here.

Finally there’s creating new jobs and new wealth. This is probably most important strategically, but people have been spun so many promises, they’re cynical, and Obama was right to point it out. Still he should look deeper here, and more often.

What gets people’s attention are ‘high road’ programs like the Apollo Alliance, new ‘green’ industrial jobs building the infrastructure of energy independence. All those wind turbines and wave generators and whatnot have to be built somewhere, and what blue collar Pennsylvania, white and Black, knows how to do very well is build things that create high value and new wealth.

This is what gets people’s attention, not rebates, handouts and McJobs. Obama’s a natural on this subject, and he’d best spend less ad money on how’s he’s not in thrall to lobbyists, and spend more as an advocate of green industrial policy that would give these mill towns real hope for change.

[Carl Davidson is a peace and justice activist, a ‘Solidarity Economy’ organizer, and webmaster for Progressives for Obama.]

1 Response to Carl Davidson on Bitterness and Hope