Carl Davidson : Time to Get Serious About Full Employment 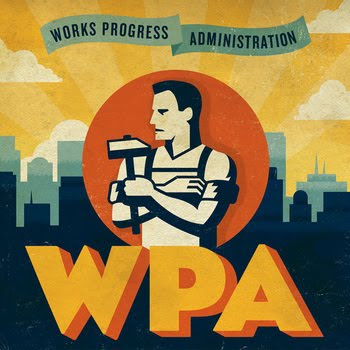 WPA image via Keep on Keepin’ On

Time to get serious about full employment:

We need a jobs program that

doesn’t tinker around the edges

My regional daily newspaper, the Pittsburgh Post-Gazette, to its credit, came out with an editorial Monday, Aug. 22, 2011, urging President Obama to push for a substantial jobs program over Republican opposition.

Action on jobs: Obama must push hard to get people back to work” is the headline, and a key point stresses “Mr. Obama now needs to offer proposals equal to the size of the problem. That means bold strokes, not half-measures. If his Republican antagonists in Congress are determined to stand in the way of getting Americans back to work, the president must say so publicly — and then go over their heads to enlist the nation in his effort.

Terrific, a good framing of the question. Unfortunately, however, once you get into the substance of the piece, it turns into a muddle. The Post-Gazette offers up a hodgepodge of proposals that tinker around the edges of the problem — more tax cuts and credits for jobs created, more unemployment benefits, and oddly, more trade deals, even though these deals mostly result in net job losses.

Here’s the heart of the matter. In a down economy, jobs are created by increasing demand, by more customers with bigger orders coming to a firm’s doors. The problem is that consumer demand has taken a nose dive since the credit bubble burst.

People don’t have money to spend. They’re cutting back on everything, and trying to unload their debt. This means business-to-business orders shrink as well. Companies may be cash-rich and have high profits, but with no increase in orders or customers at their door, they aren’t likely to hire people to do nothing just to get a tax credit.

This is where government has to become the key customer. It has to make huge productive purchases for local work and local materials to build productive infrastructure — county-owned green energy plants, new and improved schools, modernized locks and dams, Medicare for all, investment in young students and veterans like we did with the GI Bill, investment in research in new industries, and so on.

Most important, to work well, it can’t be nickel-and-dimed to death. It has to be on the scale of the expenditures for World War II. That’s when the “multiplier effect” can kick in, and related growth in manufacturing can take off in turn. And it has to be paid for by going to where the most appropriate money is, imposing a financial transaction tax on unproductive and destabilizing speculation by Wall Street.

The best the Post-Gazette does on this matter is to support Obama’s proposal for an “Infrastructure Bank,” while urging him to find a way to bypass a GOP roadblock in Congress.

But even that is too passive. It says, in effect, here’s a small pot of money. If you want to repair some roads, come and get some.

What we really need is something like the New Deal’s Tennessee Valley Authority and Works Progress Administration, but on steroids, a TVA-WPA-CCC 2.0. We need to pass John Conyers’ HR 870 Full employment Bill. We need the Department of Energy and the Department of Labor to go to every county in the country with a fully-funded proposal to build new green energy wind farms and solar power arrays as public energy utilities, hiring local workers at union scale, with no obstacles to a union election. And that’s just for starters.

Yes, we need a serious jobs program. But it’s time for everyone who utters that phrase to get serious themselves. Why? Because it’s going to take a massive upsurge in class struggle to get it — by removing those standing in the way.

1 Response to Carl Davidson : Time to Get Serious About Full Employment