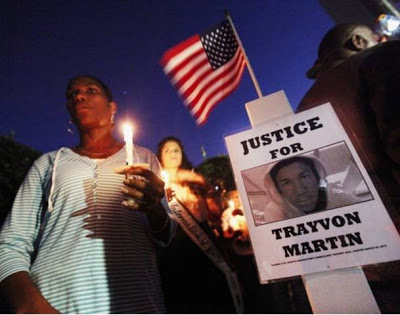 Every so often an outrage happens that lights up the sky, like when lighting strikes at night, and all of a sudden everything previously hidden in darkness and shadow stands out in sharp, bright relief.

The murder of Trayvon Martin was such an event, even though it took a while for the rolling thunder of its full impact to spread across the country. Slowly at first, and then in greater leaps, the news media, after being nudged, picked it up.

I have one quarrel with most of the reports and statements. This was not so much a tragedy as a crime. It was an old-fashioned lynching dressed up with modern-day “gun rights” being exercised in today’s gated communities.

But put that to the side. Most everyone now has dutifully called it a tragedy, called for an impartial investigation to “get to the bottom” of it and see that “justice is served.” Even President Obama finally spoke up, with the proper caveats against prejudging “current investigations,” but adding that if he had a son, he would look like Trayvon, a point he made to show empathy with the Martin family.

Then we have our former House Speaker and GOP presidential candidate, Newt Gingrich, who, after deploring the tragedy, came up with this attack on Obama in an interview with Sean Hannity:

“It’s not a question of who that young man looked like. Any young American of any ethnic background should be safe, period. We should all be horrified no matter what the ethnic background,” Gingrich said. “Is the President suggesting that if it had been a white who had been shot that would be OK because it didn’t look like him?”

“That’s just nonsense dividing this country up. It is a tragedy this young man was shot,” Gingrich continued on Hannity’s show.

“It would have been a tragedy if he had been Puerto Rican or Cuban or if he had been white or if he had been Asian-American of if he’d been a Native American. At some point we ought to talk about being Americans. When things go wrong to an American, it is sad for all Americans. Trying to turn it into a racial issue is fundamentally wrong. I really find it appalling.”

Newt, I have news for you. There’s something truly appalling here; in fact it stinks to high heaven. But it’s not Obama, and if you want to see the source of it, look in the mirror.

Gingrich fancies himself an historian, even something of an expert of the Civil War and its aftermath. He should then know something about lynching. If so, he would know that when the Reconstruction governments were overthrown, the KKK terror started in South Carolina by lynching nearly as many poor whites as Black Freedmen.

The aim was to deeply drive home the wedge of the original “Southern Strategy” aimed at dividing the working class in the South and elsewhere. But as lynching rolled on over the decades, tens of thousands of Blacks bore the brunt of it. Anti-lynching laws, also for decades, were promoted mainly by Blacks and a few radical allies, while white reactionaries blocked them.

There is nothing colorblind about lynching. It never ceases to amaze me when Republicans claim to be color-blind lovers of Dr. King, while being “appalled” at what they consider the main racists in high places, who are the African Americans supposedly “playing the race card.”

The trade union movement over the years has paid some high tuition to learn that mutual respect among nationalities is not rooted in being “blind” to each other’s distinctiveness. Solidarity with a white top and a Black bottom simply doesn’t get the job done.

But the race card is indeed being played against us. It’s been constantly played by those who would keep us under their thumbs, from Jamestown, Virginia, in 1619 up to a “gated community” in Stanford, Florida.

If you want to see it in action, for starters, watch Fox News or the GOP campaign any day of the week — then to oppose it, gather up some friends to attend a “Justice for Trayvon” rally and work to defeat every candidate and incumbent of the party of the Southern Strategy in November.

[Carl Davidson is a national co-chair of the Committees of Correspondence for Democracy and Socialism, a national board member of Solidarity Economy Network, a writer for Beaver County Blue, the website of PA’s 4th CD Progressive Democrats of America, and a member of Steelworkers Associates. He is the author of several books, including New Paths to Socialism, available online. In the 1960s, he was a national leader of SDS and a writer and editor for the Guardian newsweekly. This article was first published at the United Steelworkers’ blog. Read more articles by Carl Davidson on The Rag Blog.]