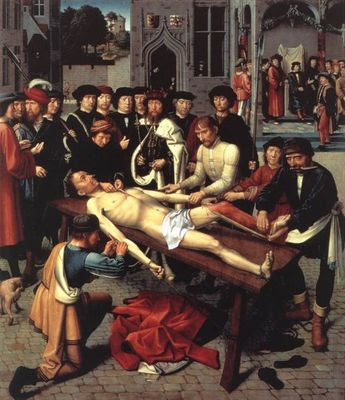 “The Judgment of Cambyses” (right panel) by Gerard David, 1498.
A post mortem:
The justice system and the medical examiner

There has been a spate of occurrences that is beginning to cast some doubt on the judgment of at least some medical examiners, and the problem is nationwide.

Medical Examiners perform autopsies, rule on cause of death and testify to their findings in a court of law. Their job is at the very core of our system of justice, and generally juries trust them implicitly. If a medical examiner says something is true, then most juries accept that pronouncement as unimpeachable. After all, that medical examiner has medical training and most jurors do not.

But recently, there has been a spate of occurrences that is beginning to cast some doubt on the judgment of at least some medical examiners, and the problem is nationwide. Just look at some of these recent incidents documented by the Fort Worth Star-Telegram:

Texas is not immune to these problems either. In our large and populous state with 254 counties, only six of those counties have medical examiner offices that are accredited by the National Association of Medical Examiners (NAME). These counties are Harris, Tarrant, Dallas, Travis, Bexar and Nueces (and some of these offices have even had some embarrassing goof-ups). Look at what has happened recently in Texas:

To their credit, the Texas legislators tried to do something about this in the 2009 legislative session. They passed a bipartisan bill “that would have required that medical examiners and their deputies be board-certified in anatomic and forensic pathology. It would also have given medical examiners the say-so on who can attend autopsies and the power to subpoena law enforcement and medical records.”

In my opinion, the bill didn’t go far enough. It should have also limited the number of autopsies a single person could perform in a year to 350 or less, and should have required ME offices to be accredited by NAME. But it was a good start on what needs to be done and would have improved the quality of autopsies in Texas.

So what happened to this good bipartisan bill? It was vetoed by Governor Rick Perry! And the governor refuses to respond to questions about why he did this. Could it be that he just doesn’t care about the state of criminal justice in Texas?

Criminal trials start with a determination by the medical examiners office. If that determination is faulty (or downright wrong), then there is almost no possibility that the trial can result in a fair and just verdict.

We’ve already seen that Perry presided over the execution of an innocent man, and then tried to cover it up by a timely replacement of several Texas Forensic Science Commission board members. With his veto of the medical examiner bill, he leaves little doubt that he considers his political fortunes more important than the accuracy and fairness of the criminal justice system in Texas.

Is there any doubt remaining that he should be replaced as governor?

1 Response to Cause of Death : Forensic Science Gone Bad