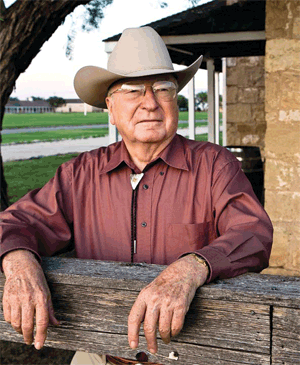 Elmer wrote Texas as it was and is with a true ear for dialogue and phrase, his writing far above that of authors who try too hard to write like Texans.

When novelist Elmer Kelton died peacefully in his sleep last weekend [Saturday, August 22], Texas lost one of its most beloved authors.

He was the author of The Time It Never Rained, which one critic listed as one of the dozen or so best novels written by an American in the 20th century, and more than 60 other books. He garnered so many awards — seven Spur Awards from the Western Writers of America, four Western Heritage (Wrangler) Awards from the National Cowboy Museum and Hall of Fame, lifetime achievement awards from the Texas Institute of Letters, the Western Literature Association — that his wife once confessed they were reduced to putting them in drawers. And the WWA voted him the “Best Western Writer of All Time.”

But to call Elmer’s work Western diminishes writing that went far beyond the genre and the region to deal with universal themes. Elmer, who was a willing and popular speaker whenever asked, used to tell audiences he liked to take a character, put him in a time of change and transition and see what he did. Those times of change were almost always in Texas history, which his novels cover from the Texas Revolution to contemporary times.

When he suggested he wanted to be a journalist, he said, his father gave him a look “that could kill Johnson grass” and announced that the trouble with the younger generation was they didn’t want to work.

Elmer was himself a man of West Texas, raised on the McElroy Ranch in Crane, where his father was foreman. While his brothers grew up to be cowboys, Elmer was more of a bookish mind. He confessed he “never made a hand,” couldn’t rope, and as a boy used to herd cattle with one eye on the cattle and the other on a book. When he suggested he wanted to be a journalist, he said, his father gave him a look “that could kill Johnson grass” and announced that the trouble with the younger generation was they didn’t want to work.

Elmer went on to a long career in agricultural journalism, primarily with the San Angelo-based Livestock Weekly from which he retired in 1990. All those years he had a parallel career writing novels. His 1972 work, The Day the Cowboys Quit, pushed him into national recognition.

Elmer wrote Texas as it was and is with a true ear for dialogue and phrase, his writing far above that of authors who try too hard to write like Texans. I’ve always thought the prologue to The Time It Never Rained, his classic novel about the 1950s drought, one of his most eloquent pieces:

It crept out of Mexico, touching first along the brackish Pecos and spreading then in all directions, a cancerous blight burning a scar upon the land. Just another dry spell, men said at first. Ranchers watched waterholes recede to brown puddles of mud that their livestock would not touch. They watched the rank weeds shrivel as the west wind relentlessly sought them out and smothered them with its hot breath. They watched the grass slowly lose its green, then curl and fire up like dying cornstalks.

Elmer’s characters were complex, never Western stereotypes, but his authentic voice was the most distinctive aspect of his writing, along with the same wry humor that characterized him in conversation. He shied away from happy endings because, he said, life doesn’t work out like that.

In person, he was modest, kind and self-effacing, with the genuine cowboy’s instinct for good manners. He was unfailingly cordial to any and all who sought to visit with him or get his autograph, even on a slip of paper if they didn’t buy a book. He traveled all over the West, but mostly Texas, to book events. He was always grateful as though you were doing him a favor when in truth he was the star of most shows.

Elmer was repeatedly gracious about his appreciation of TCU Press’ reprints of his novels that kept them in print in attractive editions — but the truth was, we were grateful to him. He is our best-selling author, and of course I will miss him in that regard. But more than that I will miss a man I respected, admired and genuinely liked. I’ve lost a friend — so has Texas.

And the world has lost a lot of good stories now unwritten. I’m told that the night before he died he was making notes for another Hewey Calloway book.

[Judy Alter, retired director of TCU Press, is the author of Elmer Kelton and West Texas: A Literary Relationship, and was friends with him for 30 years.]

Judy Alter recommends these Elmer Kelton works as among his best:

The Day the Cowboys Quit (1972) — the work that broke him out of stereotypical Westerns into novels that use the Western as a vehicle to study mankind and people’s adaptation to change –- or not.

The Time It Never Rained (1974) — generally acknowledged as his classic. Critic Jon Tuska once described this novel about the great 1950s drought (being repeated now in Central and South Texas) as “one of the dozen or so best novels written by an American in the 20th century.”

The Good Old Boys (1978) — shows, perhaps more than any other novel, Kelton’s penchant for wry humor and also has one of his strongest female characters, the schoolteacher, Spring.

This entry was posted in RagBlog and tagged Authors, Books, Deaths, Literature, Texas. Bookmark the permalink.