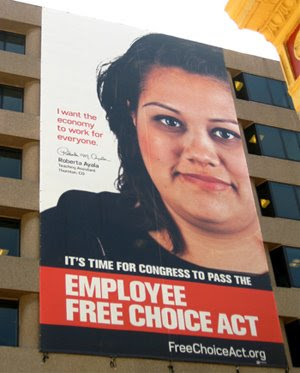 The Chamber of Commerce is using taxpayer money to fund ads against workers in political swing states.

Yesterday, I posed the question: “Is the Chamber of Commerce Using Bailout Money to Attack Workers?”

The Chamber took to their blog and ambiguously wrote, “No. No we are not.”

It’s well documented by Sam Stein at The Huffington Post that bailout recipients have been asked to funnel money to groups that are running anti-worker ads like the ones announced yesterday by the Chamber.

So I wrote, “Let me pose a more specific question: Is the Chamber actively rejecting money from bailout recipients?”

Another one quickly answered, the U.S. Chamber continues to accept as members companies which receive both public and private funds. In addition we do not believe that the receipt of taxpayer money abrogates an individual or groups’ rights under the First Amendment.

My original answer to the original question still stands, beyond question.

Actually, it’s not beyond question — and Jonathan Martin at Politico agrees:

Adam Green over at OpenLeft pushes the Chamber of Commerce to say that they’re still accepting dues from bailed-out companies.

The goal is to make the case that the Chamber is using taxpayer dollars to help fund their anti-EFCA campaign (of which they have launched new ads targeting moderate Democratic senators).

The Chamber’s Brad Peck says they’re not using bail-out money for the campaign.

I’ve asked how exactly they know that to be the case.

A bunch of folks have joined the Facebook group asking the same question, and have used the contact info posted in that group to email Chamber execs directly.

The Chamber of Commerce’s solution for fixing our economic crisis is to use funds from taxpayer bailed-out companies to fight smart economic policies that will restore balance to our economy and help rebuild the American Middle Class.

…American taxpayers have had enough. The Chamber of Commerce must stop accepting taxpayer funds to lobby against taxpayer interests.

We’ll now see if the Chamber is as oblivious to the PR disaster that is about to hit them as the Wall Street execs who used bailout money to redecorate their offices and pay bonuses were.

Maybe smarter heads at the Chamber will prevail, and they’ll take this issue off the table by publicly rejecting money from bailout recipients. We’ll see…

(Join the Facebook group to take action on this issue.)