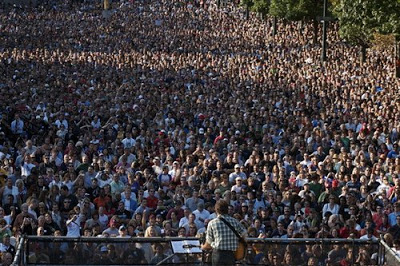 Around the world, we remain the repository of people’s dreams. A thousand George Bushes and Dick Cheneys cannot tear that house down.

I want my house back, I want my country back. I want my America back.

Nearly fifty thousand supporters gathered on a sunny afternoon to see Bruce Springsteen hold a free “Change Rocks” concert in Philadelphia today. Spanning the length of Benjamin Franklin Parkway, from the Franklin Institute to the Art Museum, people from across the Philadelphia region and the state of Pennsylvania packed themselves in to find a good spot to watch The Boss rally for change and encourage people to register to vote.

Organizers from local Campaign for Change offices addressed the crowd, urging all unregistered Pennsylvanians to register to vote and do their part to register others. Preceded by Philadelphia singer-songwriters Nora Whitaker and Amos Lee, Springsteen was introduced on stage by volunteer extraordinaire Elaine Griffin, whose volunteer work is a prime example of the grassroots efforts that make up this campaign.

Walking onstage to thunderous applause, Bruce Springsteen smiled and declared, “I’m not Barack Obama, but I’ll do my best.” Armed only with his guitar and his harmonica, Springsteen performed a solo acoustic set of classics, including “The Promised Land” and “Thunder Road,” urging the dedicated crowd to sing along.

Near the end of his set he spoke a few words in support of Barack Obama. Reflecting on his thirty-five years of writing songs about America, Springsteen talked passionately about the promise of this nation and what he sees as the “distance between the American promise and the American reality,” adding that “Barack Obama has measured that distance in his own life and in his own work.”

Strumming his guitar as he spoke, Springsteen lauded Barack’s ability to lead us in rebuilding our country together, describing the United States as a “house of dreams.” Looking back over the last eight years, and looking forward to the next eight, he added, “I don’t know about you, but I want my house back.” To wild cheers, he concluded, “I want my country back.”

As his final song, Springsteen performed Woody Guthrie’s seminal “This Land Is Your Land” as the crowd sang along. Holding up his guitar after finishing his set, The Boss declared, “It’s up to you now!” Urging all Pennsylvanians to register and volunteer, he requested, “Let’s build that house together.”

Thanks to S. M. Willhelm / The Rag Blog