Charges Likely Against Blackwater Guards in Shooting of Iraqi Citizens 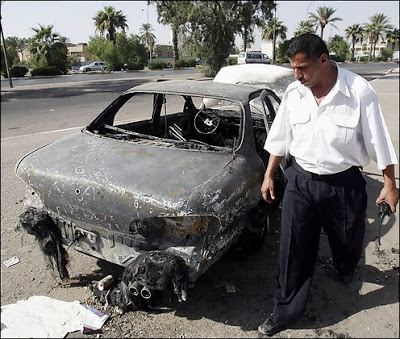 Federal prosecutors have sent target letters to six Blackwater Worldwide security guards involved in a September shooting that left 17 Iraqi civilians dead, indicating a high likelihood the Justice Department will seek to indict at least some of the men, according to three sources close to the case.

The guards, all former U.S. military personnel, were working as security contractors for the State Department, assigned to protect U.S. diplomats and other non-military officials in Iraq. The shooting occurred when their convoy arrived at a busy square in central Baghdad and guards tried to stop traffic.

Blackwater has said its personnel acted in self-defense.

The sources said that any charges against the guards would likely be brought under the Military Extraterritorial Jurisdiction Act, which has previously been used to prosecute only the cases referred to the Justice Department by the Defense Department for crimes committed by military personnel and contractors overseas. Legal experts have questioned whether contractors working for the State Department can be prosecuted under its provisions.

The sources cautioned that prosecutors are still weighing evidence gathered in a 10-month investigation that began shortly after the shootings. A federal grand jury has heard testimony from about three dozen witnesses since November, including U.S. and Blackwater officials and Iraqis, according to two of the sources.

Target letters, often considered a prelude to indictment, offer suspects the opportunity to contest evidence brought before the grand jury and give their own version of events. The letters were sent this summer, although the sources, who agreed to discuss the case only on the condition of anonymity because of its sensitivity, said a final decision on whether to indict may not be made until October, about a year after the incident.

The U.S. attorney’s office in Washington and the Justice Department’s National Security Division are leading the investigation. Channing Phillips, a spokesman for the U.S. attorney’s office, declined to comment, as did Justice Department spokesman Dean Boyd. A spokeswoman for the FBI’s Washington field office, which investigated the shooting on the ground in Iraq in the weeks after the incident, also declined to comment.

Anne E. Tyrell, a spokeswoman for North Carolina-based Blackwater, said that the company believes the guards fired their weapons “in response to a hostile threat” and is monitoring the investigation closely.

“If it is determined that an individual acted improperly, Blackwater would support holding that person accountable,” Tyrell said in a statement. “But at this stage, without being able to review evidence collected in an ongoing investigation, we will not prejudge the actions of any individual. The company is cooperating fully with ongoing investigations and believes that accountability is important.”

Earlier reports on the investigation indicated that the FBI had focused on three Blackwater guards among a larger but unknown number present at the time of the Sept. 16 incident in Baghdad’s Nisoor Square. None has been publicly identified, and authorities did not say which six received the target letters.

The shooting, and the perceived failure to hold anyone accountable for it, has fueled congressional dissatisfaction with the government’s use of private security contractors in a combat zone. Contractors working for the Defense Department are now explicitly liable for crimes under laws covering the military, but several efforts in Congress to extend that jurisdiction to State Department contractors have failed.

The incident also angered Iraqi political leaders. U.S. contractors have been exempt from Iraqi law under a decree imposed by the U.S. occupation administration in 2003.

Seeking to respond to widespread fury among Iraqis over the Nisoor Square incident, the government of Prime Minister Nouri al-Maliki insisted in negotiations over a new bilateral security agreement with the United States that all contractors come under Iraqi legal jurisdiction. Facing pressure to finalize an agreement by the end of the year, the Bush administration agreed to meet the Iraqi demand, according to officials close to the discussions. But the administration continues to insist on immunity from Iraqi law for military and official Defense Department personnel, the officials said.

Blackwater is one of three U.S. security firms under contract with the State Department to provide personal security in Iraq. The State Department in May extended Blackwater’s contract for another year, saying that while the case was still under investigation it had no enforceable cause to cancel it.

Lawyers for the Blackwater guards have argued in ongoing discussions with prosecutors that the Military Extraterritorial Jurisdiction Act, known as MEJA, can be applied only to contractors working for the Defense Department, two sources said. That position appeared to be buttressed by the Congressional Budget Office, which said in a report on contractors in Iraq released last week that MEJA “does not apply to civilians working . . . for federal departments or agencies other than DOD [the Department of Defense].”

Legislative proposals to extend MEJA’s provisions beyond the Defense Department — which have been repeatedly opposed by the White House — have made the same point.

But the question has never been tested in court. Some outside legal experts said that prosecutors would be able to make a compelling argument that MEJA covers Blackwater guards involved in the shooting under a 2005 amendment that expanded MEJA’s provisions to include contractors “supporting the mission of the Department of Defense.”

“You are dealing with a military environment,” said Scott Silliman, a law professor at Duke University who specializes in national security matters. “If the contractors were not there, those State Department folks would be guarded by the military. Prosecutors could argue to the judge that those facts fit within the definition of furthering the [Defense Department] mission in Iraq.”

Among other possible complications in potential legal action against the Blackwater contractors are interviews some of the guards gave to officials from the State Department’s Bureau of Diplomatic Security immediately after the incident. The interviews were conducted under legal protections against self-incrimination granted to government employees, and the guards were informed that they could not be used by FBI investigators or in a potential prosecution.

Several former prosecutors and defense attorneys said that the government would have a difficult time proving the case even if it overcame the jurisdictional question. They noted the hurdles facing prosecutors in domestic police shooting cases, adding that such cases are exceedingly hard to win.

Trying to convince jurors that guards committed a crime by opening fire in a war zone “makes it an exponentially tougher case to prove” than a bad police shooting, said George Parry, a former federal and state prosecutor in Pennsylvania who handled law enforcement shootings as a prosecutor and defense attorney. Parry does not represent anyone in the Blackwater matter.

The former prosecutors and defense attorneys said defense lawyers would work hard to put jurors inside the war zone and portray the guards as having to make split-second decisions in an environment where insurgents dress like civilians and attacks could occur anywhere, at any moment. Witnesses in such situations also often contradict each other, and evidence gathered in Baghdad may not meet the same forensic standards that jurors are used to seeing in the United States, the lawyers said.

The Nisoor Square incident took place on a Tuesday afternoon. A Blackwater team arrived in several vehicles at the intersection — accounts differ as to why they were there — and tried to stop traffic. Shooting erupted, leaving numerous Iraqis dead and wounded. Blackwater officials have said the guards came under fire; investigations by the U.S. military and the Iraqi government — and initial findings by the FBI — concluded that no one fired except the contractors.