Chellis Glendinning : In Bolivia, ‘The Repression Strengthened Us!’ 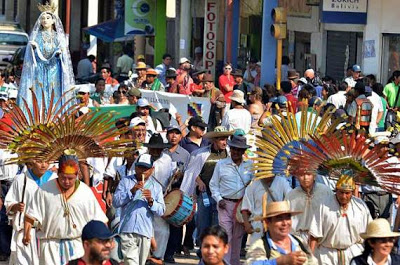 Native demonstrators march on La Paz to protest highway construction. Photo from AFP.
Letter from Bolivia:
‘The repression strengthened us!’

The ragtag band walked day and night in flip-flops, and the hearts of Bolivians went out to them…

LA PAZ, Bolivia — One wrong move, forgetting to take your hat off, the interruption of a phone ringing notwithstanding, after a spell a trip to the bank to pay the light bill — alongside men carrying machine guns — does get to feel normal.

Such a transit of mind is a testimony to the human ability to adapt, yes? — and I am reminded of a tale that dear friend anthropologist Francis Huxley tells.

It was the 1950s, and he was called to transport a Native of the Brazilian Xingu tribe to Sao Paulo for emergency medical treatment. After success with that, they strolled through the streets of the city — for the Native man, the first time ever in such a scene. Upon passing a bank heavily guarded by men in military uniform, bearing epaulets, badges, and heavy black boots and carting machine guns — the man turned and asked what this strange display was all about.

Grappling for words, Francis reported that this was where the jefe kept his riches. The Native man immediately quipped, “Well! He must not be a very good jefe!”

And so it is here, just over the border from Brazil and 60 years later.

Jefe Evo Morales has — to quote one of Nicole Hollander’s “Sylvia” cartoons — “made (him)self unpopular.” To tell the truth, he already had accomplished that feat, but the Moxeño-Chimare-Yurakerés march to the capital hammered the final nail in.

On 15 August, some 700 indígenas set out to protest a Brazil-funded intra-continental superhighway the Bolivian state was erecting through their constitutionally-protected, sovereign eco-reserve, the Territorio Indígena and Parque Nacional Isibro Sécure (TIPNIS) — where the last of the planet’s gatherer-hunter cultures thrive, while flora and fauna in danger of extinction make their fragile way. The purpose of the highway: to carry petroleum from Brazil across Bolivia to Chile’s ports to be shipped to your cars in the U.S.

The ragtag band walked day and night in flip-flops, and the hearts of Bolivians went out to them in the form of a nationwide drive to send shoes, clothes, food, and medicines.

First the government blocked the road from passage, including the arrival of food and water. Then, on Sunday 25 September, the police attacked the encampment! Bursting in with tear gas, they chased down fleeing indígenas, sometimes five officers in full riot gear against a single boy in cotton shorts; with their night sticks they beat them on their backs and chests and heads; they bound their arms, legs, and mouths with silver duct tape making it almost impossible to breathe; they dragged some 300 dirigente-leaders, women, children, and ancianos to waiting trucks and hauled them away to unknown locations. It was claimed that one child died in the violence. 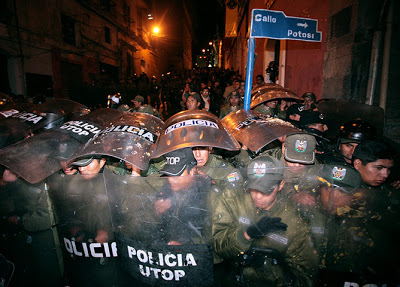 Riot police in La Paz. Photo from The Guardian (U.K).
By Monday morning a pall of shock had settled over Bolivia; everyone was glued to a television somewhere — and then the popular response burst forth. All over, including at the Bolivian embassy in New York where Morales was presenting at the United Nations, people took to the streets. And the venting allowed for long pent-up emotions to flow into the public vocabulary.

On 19 October what had started, two months before, as a march of 700 had now swelled to 3,000. After two months of treking/camping, treking/camping; after the sweltering heat of the tropics and the driving sleet of the mountains; after bearing inadequate shoes, too thin jackets, foot sores, injuries, dehydration, diarrhea, and exhaustion; after enduring disregard, insults, and arguments for disqualification spouting from the mouths of government officials: after the official withholding of water and food; and then having endured violent repression — the TIPNIS marchers rounded the last crag before the descent into the capital city.

What lay below, they say, was unexpected.

Trumpets blared. Flutes sang. Mariachi bands blasted accordion music. Placards proclaimed: “TIPNIS=VIDA, EVO=MUERTE,” “EL TIPNIS: NO SE TOCA, CARAJO!” and “¡TIPNIS SOMOS TODOS!” People rushed to meet the marchers, hugged them, kissed them on the lips. Men and women were sobbing in the streets! Whole schools had been liberated to play a role in history, and uniformed children were waving flags, holding up their drawings of tropical flowers, and cheering.

Along the boulevards the welcomers flanked the marchers like a thick envelope of protection from potential police action; in some parts the shield extended five times thicker than the march itself.

It was the largest gathering of humanity in the history of Bolivia.

After all his grandstanding about how the state would never, ever, give in — not! the president ventured into the plaza with his phony smile — this after months of badmouthing the marchers as dupes of the imperialist state to the north, denying them a meeting, sending para-protestors out to harm them, cutting off food and water, and finally unleashing the military.

Against the very real possibility of his government going under, he gave in. No highway through TIPNIS. As we say in baseball, though, “It’s not over ‘till it’s over.” Now the government is finding ways to backpedal. But this was a major triumphant event that went unreported in the EE.UU — and I wanted you, for this moment, to bask in the heroism that our human spirit is capable of mustering.

[Chellis Glendinning is the author of five books, including When Technology Wounds, Off the Map: An Expedition Deep into Empire and the Global Economy and Chiva: A Village Takes on the Global Heroin Trade. She lives in Bolivia and may be contacted via www.chellisglendinning.org. A version of this article was published at CounterPunch. Read more of Chellis Glendinning’s writing on The Rag Blog.]

1 Response to Chellis Glendinning : In Bolivia, ‘The Repression Strengthened Us!’