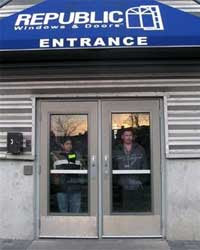 Much has been made about the prospect that Barack Obama’s presidency might, due to economic necessity and the president-elect’s interventionist inclinations, be a reprise of the New Deal era.

But there will be no “new New Deal” if Americans simply look to Obama to lead them out of the domestic quagmire into which Bill Clinton and George Bush led the country with a toxic blend of free-trade absolutism, banking deregulation and disdain for industrial policy. Just as Roosevelt needed mass movements and militancy as an excuse to talk Washington stalwarts into accepting radical shifts in the economic order, so Obama will need to be able to point to some turbulence at the grassroots.

And so he may have it.

After the Bank of America — a $25-billion recipient of Bailout Czar Hank Paulson’s “Wall Street First” largesse — cut off operating credit to the Republic Windows and Doors company, executives of the firm announced Friday that they were shutting its factory in Chicago.

Instead of going home to a dismal Holiday season like hundreds of thousands of other working Americans who have fallen victim to the corporate “reduction-in-force” frenzy of recent weeks — which has seen suddenly-secure banks pocket federal dollars rather than loosen up credit — the Republic workers occupied the factory where many of them had worked for decades.

Members of United Electrical Workers Local 1110, which represents 260 Republic workers, are conducting the contemporary equivalent of the 1930s sit-down strikes that led to the rapid expansion of union recognition nationwide and empowered the Roosevelt administration to enact more equitable labor laws. And, just as in the thirties, they are objecting to policies that put banks ahead of workers; stickers worn by the UE sit-down strikers read: “You got bailed out, we got sold out.”

“We’re going to stay here until we win justice,” says Blanca Funes, 55, of Chicago, who was one of the UE members occupying the Republic factory over the weekend for several hours.

Most of Republic workers are Hispanic and they want answers from the Bank of America and the company.

According to the UE, the workers hope “to force the company and its main creditor to meet their obligations to the workers.”

“Their goal is to at least get the compensation that workers are owed; they also seek the resumption of operations at the plant,” explains the union. “All 260 members of the local were laid off Friday in a sudden plant closing, brought on by Bank of America cutting off operating credit to the company. The bank even refused to authorize the release of money to Republic needed to pay workers their earned vacation pay, and compensation they are owed under the federal WARN Act because they were not given the legally-required notice that the plant was about to close.”

UE is an independent union that is not affiliated with the AFL-CIO, although its roots go back to the militant labor organizing of the 1930s that gave rise to the groundbreaking Congress of Industrial Organizations.

Some of the solidarity of old has been on display in Chicago this weekend, as UE members have been supported by unions that are affiliated with both the AFL-CIO and the Change to Win coalition of major unions.

Recognizing the absurdity of taxpayer-funded bailouts that enrich banks that in turn cut credit for American manufacturers, Richard Berg, president of Chicago’s powerful Teamsters Local 743, said. “If this bailout should go to anything, it should go to the workers of this country.”

Invoking Chicago’s rich record of labor struggle — from the Haymarket Martyrs in the 19th century to the steel industry organizing of the 1930s — American Federation of State, County and Municipal Employees Council 31 regional director Larry Spivack hailed its latest expression.

“The history of workers is built on issues like this here today,” Spivack told union members at the plant.

Barack Obama will not be the new FDR, and this coming period will not see a “new New Deal” unless labor is inspired to fight once more to keep workers on the job, plants operating and American manufacturing industries muscular enough to survive in the global market. Then, the proper demands can be made on an Obama administration to back up not just unions but their expanding membership.

If the right history of this time is written, it will be said that the new New Deal began in Chicago — not just because Obama comes from the city but because workers there chose to stand up by sitting down.

This entry was posted in RagBlog and tagged Labor, Labor Unions. Bookmark the permalink.