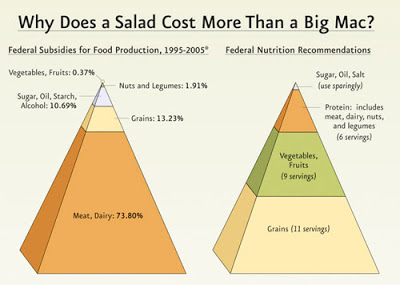 Now’s the time to reinvent America’s farm and food policies.

Some critics expressed outrage, others surprise, especially since they had mounted a vigorous, 55,000-plus strong online petition to persuade President-elect Barack Obama to nominate someone more progressive who would promote sustainable food and farming.

The need for sweeping change could not be clearer when it comes to our food: At taxpayer expense, current policy subsidizes large corporate farms and destructive industrial agriculture, which rob the countryside of economic diversity and precious environmental resources, such as water and topsoil.

These same subsidies, and anemic regulatory enforcement, encourage an increasingly monopolized food system, and a “cheap food” policy that lards us with fatty, processed foods – the cost of which is ultimately dear, more than $100 billion annually for obesity and diet-related diseases. Today’s food system also generates a sizable portion of America’s greenhouse gases, and rests on fast-dwindling and volatile oil supplies.

Now is the time for something different – change we can eat.

As Mr. Obama weighs a massive stimulus package, he should include new funding streams that promote sustainable food – to build up alternatives such as farmer’s markets, local “foodshed” programs that promote consumption of local produce, and farm-to-institution projects that encourage schools, hospitals, and other large buyers to purchase local organic foods when possible.

The change we need in food is as urgent as any we face – changes that affect national health, energy security, global warming, and more. Here, then, is a not-so-modest nine-point platform for food reform, some of which could be included in Obama’s stimulus package. Other elements may require a lengthier policy push:

Food is a vital cornerstone of both individual life and civil society, and our current system is making us fatter, churning out greenhouse gases, and abusing workers and animals.

With a new administration elected on a “change” agenda, it’s a timely moment to press for the most basic change of all: change in the food that ends up on our plates and in our bodies.

[Christopher D. Cook is a journalist and the author of “Diet for a Dead Planet: Big Business and the Coming Food Crisis.”]

This entry was posted in RagBlog and tagged Agriculture, Barack Obama, Sustainability. Bookmark the permalink.