Chris Hedges : The Attack of the Future Eaters 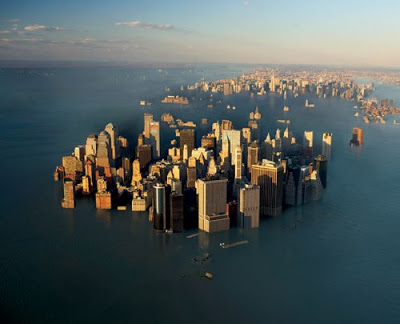 Image from AppleBazaar.
Calling all future-eaters:
Time is not on our side

The human species during its brief time on Earth has exhibited a remarkable capacity to kill itself off. The Cro-Magnons dispatched the gentler Neanderthals. The conquistadors, with the help of smallpox, decimated the native populations in the Americas. Modern industrial warfare in the 20th century took at least 100 million lives, most of them civilians.

And now we sit passive and dumb as corporations and the leaders of industrialized nations ensure that climate change will accelerate to levels that could mean the extinction of our species. Homo sapiens, as the biologist Tim Flannery points out, are the “future-eaters.”

In the past when civilizations went belly up through greed, mismanagement, and the exhaustion of natural resources, human beings migrated somewhere else to pillage anew. But this time the game is over. There is nowhere else to go. The industrialized nations spent the last century seizing half the planet and dominating most of the other half.

Collapse this time around will be global. We will disintegrate together. And there is no way out. The 10,000-year experiment of settled life is about to come to a crashing halt. And humankind, which thought it was given dominion over the Earth and all living things, will be taught a painful lesson in the necessity of balance, restraint and humility.

There is no human monument or city ruin that is more than 5,000 years old. Civilization, Ronald Wright notes in A Short History of Progress, “occupies a mere 0.2 percent of the two and a half million years since our first ancestor sharpened a stone.”

Bye-bye, Paris. Bye-bye, New York. Bye-bye, Tokyo. Welcome to the new experience of human existence, in which rooting around for grubs on islands in northern latitudes is the prerequisite for survival.

We view ourselves as rational creatures. But is it rational to wait like sheep in a pen as oil and natural gas companies, coal companies, chemical industries, plastics manufacturers, the automotive industry, arms manufacturers, and the leaders of the industrial world, as they did in Copenhagen, take us to mass extinction? It is too late to prevent profound climate change. But why add fuel to the fire? Why allow our ruling elite, driven by the lust for profits, to accelerate the death spiral? Why continue to obey the laws and dictates of our executioners?

The news is grim. The accelerating disintegration of Arctic Sea ice means that summer ice will probably disappear within the next decade. The open water will absorb more solar radiation, significantly increasing the rate of global warming. The Siberian permafrost will disappear, sending up plumes of methane gas from underground. The Greenland ice sheet and the Himalayan-Tibetan glaciers will melt.

But reality is rarely an impediment to human folly. The world’s greenhouse gases have continued to grow since Zwally’s statement. Global emissions of carbon dioxide (CO22) from burning fossil fuels since 2000 have increased by 3 per cent a year. At that rate annual emissions will double every 25 years.

James Hansen, the head of NASA’s Goddard Institute for Space Studies and one of the world’s foremost climate experts, has warned that if we keep warming the planet it will be “a recipe for global disaster.” The safe level of CO22 in the atmosphere, Hansen estimates, is no more than 350 parts per million (ppm). The current level of CO22 is 385 ppm and climbing. This already guarantees terrible consequences even if we act immediately to cut carbon emissions.

The natural carbon cycle for 3 million years has ensured that the atmosphere contained less than 300 ppm of CO22, which sustained the wide variety of life on the planet. The idea now championed by our corporate elite, at least those in contact with the reality of global warming, is that we will intentionally overshoot 350 ppm and then return to a safer climate through rapid and dramatic emission cuts.

This, of course, is a theory designed to absolve the elite from doing anything now. But as Clive Hamilton in his book Requiem for a Species: Why We Resist the Truth About Climate Change writes, even “if carbon dioxide concentrations reach 550 ppm, after which emissions fell to zero, the global temperatures would continue to rise for at least another century.”

Copenhagen was perhaps the last chance to save ourselves. Barack Obama and the other leaders of the industrialized nations blew it. Radical climate change is certain. It is only a question now of how bad it will become. The engines of climate change will, climate scientists have warned, soon create a domino effect that could thrust the Earth into a chaotic state for thousands of years before it regains equilibrium.

“Whether human beings would still be a force on the planet, or even survive, is a moot point,” Hamilton writes. “One thing is certain: there will be far fewer of us.”

We have fallen prey to the illusion that we can modify and control our environment, that human ingenuity ensures the inevitability of human progress, and that our secular god of science will save us. The “intoxicating belief that we can conquer all has come up against a greater force, the Earth itself,” Hamilton writes. “The prospect of runaway climate change challenges our technological hubris, our Enlightenment faith in reason and the whole modernist project. The Earth may soon demonstrate that, ultimately, it cannot be tamed and that the human urge to master nature has only roused a slumbering beast.”

We face a terrible political truth. Those who hold power will not act with the urgency required to protect human life and the ecosystem. Decisions about the fate of the planet and human civilization are in the hands of moral and intellectual trolls such as BP’s Tony Hayward.

China’s transformation into totalitarian capitalism, done so world markets can be flooded with cheap consumer goods, is contributing to a dramatic rise in carbon dioxide emissions, which in China are expected to more than double by 2030, from a little over 5 billion metric tons to just under 12 billion.

This degradation of the planet by corporations is accompanied by a degradation of human beings. In the factories in Guangdong we see the face of our adversaries. The sociologist Ching Kwan Lee found “satanic mills” in China’s industrial southeast that run “at such a nerve-racking pace that worker’s physical limits and bodily strength are put to the test on a daily basis.” Some employees put in workdays of 14 to 16 hours with no rest day during the month until payday.

In these factories it is normal for an employee to work 400 hours or more a month, especially those in garment industry. Most workers, Lee found, endure unpaid wages, illegal deductions and substandard wage rates. They are often physically abused at work and do not receive compensation if they are injured on the job. Every year a dozen or more workers die from overwork in the city of Shenzhen alone. In Lee’s words the working conditions “go beyond the Marxist notions of exploitation and alienation.”

A survey published in 2003 by the official China News Agency, cited in Lee’s book Against the Law: Labor Protests in China’s Rustbelt and Sunbelt, found that three in four migrant workers had trouble collecting their pay. Each year scores of workers threaten to commit suicide, Lee writes, by jumping off high-rises or setting themselves on fire over unpaid wages. “If getting paid for one’s labor is a fundamental feature of capitalist employment relations, strictly speaking many Chinese workers are not yet laborers,” Lee writes.

The leaders of these corporations now determine our fate. They are not endowed with human decency or compassion. Yet their lobbyists make the laws. Their public relations firms craft the propaganda and trivia pumped out through systems of mass communication. Their money determines elections. Their greed turns workers into global serfs and our planet into a wasteland.

As climate change advances we will face a choice between obeying the rules put in place by corporations or rebellion. Those who work human beings to death in overcrowded factories in China and turn the Gulf of Mexico into a dead zone are the enemy. They serve systems of death. They cannot be reformed or trusted.

The climate crisis is a political crisis. We will either defy the corporate elite, which will mean civil disobedience, a rejection of traditional politics for a new radicalism and the systematic breaking of laws, or see ourselves consumed.

Time is not on our side. The longer we wait, the more assured our destruction becomes. The future, if we remain passive, will be wrested from us by events. Our moral obligation is not to structures of power, but life.

[Chris Hedges writes a regular column for Truthdig.com. Hedges graduated from Harvard Divinity School and was for nearly two decades a foreign correspondent for The New York Times. He is the author of many books, including: War Is A Force That Gives Us Meaning, What Every Person Should Know About War, and American Fascists: The Christian Right and the War on America. His most recent book is Empire of Illusion: The End of Literacy and the Triumph of Spectacle.]

4 Responses to Chris Hedges : The Attack of the Future Eaters