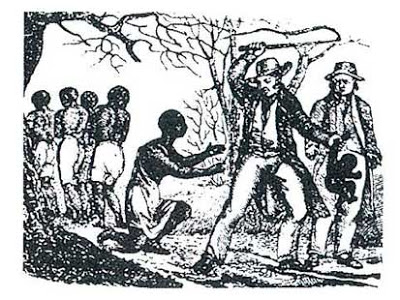 The Christian Defense Coalition held their anti-Obama press conference today — “An Appeal to Catholics Regarding the 2008 Presidential Election” — complete with the “I want you to pay for abortions” Obama-as-Uncle-Sam picture (see below)… as well as some other interesting material.

Such as: this image of slavery (above), invoked in the CDC’s literature to argue that there is nothing wrong with Catholics being “single issue” voters on abortion.

Argues the CDC: “if that issue involves a fundamental right, such as the right to life for a certain group of human beings, and there is only one morally legitimate position on that issue…no faithful Catholic would vote for a candidate who, although ‘personally opposed to slavery,’ supported ‘a white man’s right to choose’ to own slaves.”

Click HERE to see the context of the slavery mention as well as the other controversial materials. (Note: we did blur out one image of an aborted fetus.)

Sen. Barack Obama, D-Illinois, and his views on abortion have been confounding some observers these days.

And perhaps that’s in no small way the reason why the controversial Christian Defense Coalition is launching a new campaign focused on painting Obama as “The Abortion President.”

Check out THIS IMAGE of Obama as Uncle Sam: “I Want YOU To Pay for Abortions,” courtesy of CBN’s Brody File. 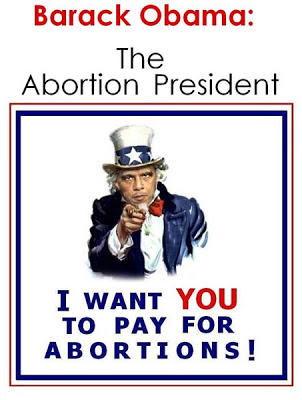 Rev. Patrick J. Mahoney, director of the Christian Defense Coalition, says Obama would have “the most extremist policies on abortion of any President in history. Senator Obama’s views on abortion are so radical that he even wants American citizens to pay for them. This would include Catholics, Evangelicals and all people of faith. He would also expand abortion rights through his passionate support of The Freedom of Choice Act.”

This ad becomes relevant within the context of Obama’s attempts to win over evangelical voters — some of whose votes may be up for grabs given Obama’s comfort discussing his Christian faith and their distrust of Sen. John McCain, R-Ariz. — Obama’s support for abortion rights will assuredly be a sticking point.

Obama’s desire to win these voters may be why, in a recent interview with Relevant magazine, (“Covering God, Life, and Progressive Culture”) Obama seemed to be moving rightward on the issue — rhetorically, at least — saying:

“I have repeatedly said that I think it’s entirely appropriate for states to restrict or even prohibit late-term abortions as long as there is a strict, well-defined exception for the health of the mother. Now, I don’t think that ‘mental distress’ qualifies as the health of the mother. I think it has to be a serious physical issue that arises in pregnancy, where there are real, significant problems to the mother carrying that child to term. Otherwise, as long as there is such a medical exception in place, I think we can prohibit late-term abortions.”

The language Obama used in that response seemed to remove “mental distress” as an allowable exception justifying a post-22 week abortion.

To some observers, that would seem to go against the Supreme Court decision Doe v. Bolton — handed down the same day as the more famous (or infamous) Roe v Wade decision legalizing abortion, though the Court said the decisions were to be “read together.”

Doe holds that the health exception permitting abortion after viability should be based on a “medical judgment…exercised in the light of all factors — physical, emotional, psychological, familial, and the woman’s age — relevant to the wellbeing of the patient,” as ABC News’ Supreme Court reporter Jan Crawford Greenburg noted over the weekend.

So was Obama suggesting to Relevant that he disagrees with Doe?

That would seem to contradict Obama’s support for the “Freedom of Choice Act,” which codifies in law a mental health exception for post-viability abortions, legislation that Obama has publicly supported.

The Obama campaign says no, that’s not what he was saying, and spokesfolk explained that the senator’s use of “mental distress” in the Relevant interview was not a reference to “mental illness.”

On Saturday, after a reporter noted to Obama that he had said that mental distress shouldn’t be a reason for late-term abortion, Obama clarified, “historically I have been a strong believer in a women’s right to choose with her doctor, her pastor and her family…I have consistently been saying that you have to have a health exception on many significant restrictions or bans on abortions including late-term abortions. In the past there has been some fear on the part of people who, not only people who are anti-abortion, but people who may be in the middle, that that means that if a woman just doesn’t feel good then that is an exception. That’s never been the case.”

But if Obama is saying that “mental distress” is already not a legal exception for abortion bans, then what was the point of what he told Relevant? He maintains he wasn’t discussing any view that runs contrary to current abortion law, so it would seem he was just discussing a personal view — that a woman, 8 1/2 months pregnant, shouldn’t be able to get an abortion just because she’s feeling blue.

Some abortion opponents suggest that Obama was merely trying to muddy the waters and sound more centrist on the issue — as if his mind were open to some abortion bans, when in fact he was merely stating current law wrapped in some triangulating language.