Cindy Sheehan : The ‘Myths of the Robber Class’ 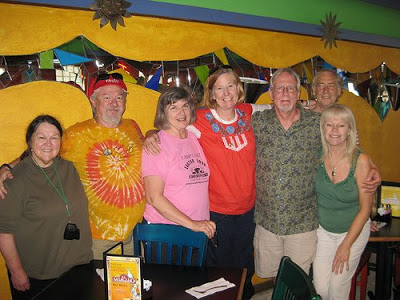 …her message is also about the community she knows that you can believe in. That community surrounded her in Crawford, Texas. and still appreciates her courage.

Cindy Sheehan came to Austin promoting her new internet book, Myth America: 10 Greatest Myths of the Robber Class and the Case for Revolution. She spoke at the Unitarian Universalist Church on Wednesday and came from the Alex Jones show to El Mercado to meet with Rag Bloggers at a south Austin restaurant on Thursday afternoon.

On August 6, 2005, Cindy Sheehan went to Crawford, Texas with a question for President George W. Bush. Her son, Casey had been killed in Iraq on April 4, 2004. When twelve Marines were killed in Iraq on August 3, 2005, she heard Bush tell the nation they had died for a “noble cause.” The question Cindy Sheehan brought to Bush’s vacation ranch was “For What Noble Cause?”

The simple question resonated with the authority of a mother’s grief. Sheehan had become active in Military Families Speak Out and helped found Gold Star Families for Peace. But it was camping out in a Crawford ditch that brought her international attention. Her direct action galvanized a peace movement that had succumbed to near-terminal low morale from the double dose of “shock and awe” and a Bush second term.

From the initial seven campers in that ditch, Camp Casey grew into a tent city, able to spring up repeatedly when Bush took his many vacations. Camp Casey attracted thousands of peace activists to Crawford. The experience was profoundly moving. [See Alice Embree: Easter Weekend at the Ranch,The Rag Blog.] Peace activists, veterans and active-duty soldiers were welcomed there. Camp Casey was where the war was personal and not the forgotten, barely noticed background noise on the national news.

Plunged into the limelight, Cindy Sheehan found herself criticized for occupying that limelight. Taking the antiwar message to Congress, she heard from Democrats that a majority was needed in the House to challenge war funding and hold the policy makers accountable. When that Democratic majority was achieved in 2006, she heard that a Senate majority was needed. Nothing changed. Entirely disillusioned with the Democratic Party, Cindy Sheehan decided to run against House Speaker Nancy Pelosi as an independent. Sheehan’s progressive platform had strong labor, environmental and foreign policy planks. She advocated single payer health insurance and legalizing marijuana. She got little media attention as a candidate and a lot of flack from Democrats and came in second in the race.

Barrack Obama had emerged as a presidential candidate, benefiting greatly from the energy of peace activists. When he became President, his promise of ending the war morphed into the withdrawal of troops from Iraqi cities, the maintenance of permanent bases and the re-deployment of the military to another war zone.

Now Cindy Sheehan hosts a weekly internet radio show,Cindy Sheehan’s Soapbox. The Nobel Peace prize nominee had three published books before she released the internet book, Myth America, available on her website. She does not believe the Democratic Party offers alternatives. She advocates change on a smaller scale where people forge community to strengthen each other, where they forge common ground around sustainable agriculture, buying locally, minimizing consumption, forgoing credit and moving their money from the mega-banks into not-for-profit credit unions.

Cindy Sheehan was in Dallas before she came to Austin. There, she led a demonstration to the barricades in front of George W. Bush’s new suburban home. She drew fire from the right (“News Flash, Cindy. There’s a new President.”) She has written a small, downloadable book — more of a pamphlet — on the myths you can’t believe in about America. But, her message is also about the community she knows that you can believe in. That community surrounded her in Crawford, Texas. and still appreciates her courage.

[To find Myth America: 10 Greatest Myths of the Robber Class and the Case for Revolution by Cindy Sheehan, go here.] 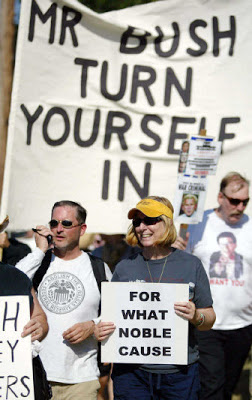 Cindy Sheehan at Dallas protest. Photo by Brandon Wade / special to the Ft. Worth Star-Telegram.

DALLAS – Eighth-grader Steven Rasansky had a front-row seat for a government lesson Monday.

Sitting at his friends’ lemonade stand across the street from former President George W. Bush’s new home, he watched anti-war protesters and Bush supporters square off with only a city street dividing them.

Front and center in the sweltering 90-degree heat was Cindy Sheehan, the California mother who drew national attention in recent years with her protests near Bush’s Crawford ranch as she demanded to speak to him about her son’s death in Baghdad.

“George Bush and his administration are mass murderers,” she told the crowd, using a loudspeaker. “People say, ‘Cindy, get over it.’ Well, there are still two wars raging. I don’t have an option of getting over it. . . . We have to keep it up so things like this don’t happen again.”

Anti-war protesters say they want Bush and his administration investigated and prosecuted for war crimes and crimes against humanity. Sheehan has also demonstrated against President Barack Obama because the Democrat has continued the wars.

During the more than half-hour protest, which included a nearly mile-long march to the neighborhood, protesters yelled, “Don’t wait, investigate.” Pro-Bush supporters chanted “USA” for the former president whom they say did a good job.

“I think this is crazy,” said Rasansky, 13, whose friends had hoped to make some money selling pink lemonade and chocolate chip cookies. “I didn’t think it would end up like this.”

Bearing signs with slogans ranging from “No war criminals in my neighborhood” and “W = War Crimes” to “Don’t Mess with Bush” and “They did not die in vain,” more than a hundred people turned out on both sides of the issue.

Dozens of police officers and Secret Service agents blocked the entrance to the Bush neighborhood and patrolled the area. An officer who declined to give his name said there had been no arrests and no problems.

Erika Davis drove from Fort Worth to join the protest against Bush.

“Just because we have a new president, people say you should forget about it,” said Davis, a 62-year-old counselor in Fort Worth. “I don’t believe anyone is above the law.”

Charlotte and Chuck Herman of Dallas turned out to support Bush, holding a sign that read “Bush saved you cowards.”

“We think he made a great president and we’re glad he moved back here to Dallas,” said Charlotte Herman, 64. “We want him to retire in peace.”

Marla Kilday, who lives near Bush in Dallas, was also there to support him.

“I think this is inappropriate,” she said. “The man has given his eight years in office and we just want the neighborhood to be peaceful and quiet.”

Sheehan’s son, Army Spc. Casey Sheehan, died in a 2004 ambush in Baghdad. She said she can’t allow Bush’s “crimes” to be forgotten just because he is no longer in the White House.

“You can bet your whatever that every time I’m in Dallas, I’ll be out here holding a picture of my son.”