Cindy Sheehan : ‘This is Horseshit" 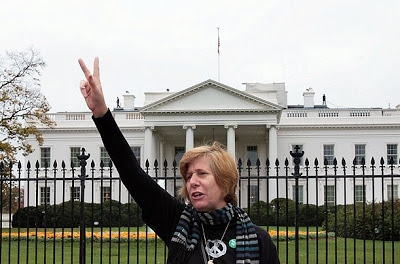 Cindy Sheehan. Photo by Jim Watson / AFP / Getty.
‘This nation is teetering on the precipice of financial ruin and dragging the rest of this planet down with us’
By Cindy Sheehan / August 6, 2008

It is not if we will be extremists, but what kind of extremists will we be?

You know, I don’t care if it’s not proper for a Congressional candidate to say: “horseshit.” I don’t care if it is not a good “tactic” to get kicked out of a Congressional non-impeachment hearing that was just a bunch of horseshit anyway. I don’t care if I get accused of being too “extreme” for bucking the (cyst)em by doing everything form camping in a ditch in Crawford, Tx to non-violent civil disobedience to, lately, running for Congress as (oh no!) an independent.

If people can’t see how this nation is teetering on the precipice of financial ruin and dragging the rest of this planet down with us as we destroy our ecology, too…and if people don’t realize how desperate our situation is, then I must say, that’s horseshit!

I am angry. No, I am incensed that hundreds of thousands of people are dead, dying, wounded, displaced from their homes or being imprisoned and tortured by the sadists that reside or work at 1600 Pennsylvania Avenue with the approval of their accomplices down the road in Congress. I am furious that I buried my oldest son when he was 24 years old for the unrepentant lies and the unpunished crimes of the Bush mob. Are you incensed? If not, maybe you should ask yourself: “Why?” Hypothetically: “Why am I not enraged that my country has killed or hurt so many people for absolutely no noble cause in my name and with my tacit approval?”

I am steamed that the working class has to, once again, pay for the excesses of the capitalist criminals that feeds its rapacious appetite with the flesh and blood of our children and won’t rest until it owns every penny in this world and has all the power.

You may say, “But Cindy, it is not polite to be angry or to use such strong language in public.” Horseshit! In my opinion, every citizen in this country should rise up in anger and DEMAND that George Bush and Dick Cheney not only be impeached and removed from office, but be tried and convicted for murder and crimes against the peace and humanity!

We should all walk off of our jobs and refuse to work and refuse to be cogs in the wheels of psychotic consumerism until our troops, military contractors and permanent bases are removed from Iraq and Afghanistan. We should, but most of us won’t. We won’t because it may mean that we would lose something of “value.” Material possessions are so transitory, as are our lives. We can leave a lasting impression by our courageous activism and moral sacrifice, or we can leave a pile of rusting metal or rotting wood. I choose the former for myself.

We should come out of our comas of too much TV news and not enough non-biased information to push for alternatives to fossil fuels that are clean and renewable and protest nuclear facilities and off-shore oil drilling like we used to in the olden days when people actually cared enough about not poisoning our world to get off of their couches or (today) out from behind their computer screens to do something constructive instead of complacently shelling out hundreds of dollars a week for gasoline and food.

I get so pissed off when one of my supporters has a tooth ache and can’t afford to go see a dentist to fix it or when my sister has had a cough for almost two years and doesn’t have the health insurance she needs to get fully well. And when I think that almost 50 million people in this country are non-insured or under-insured, I see red. Why, in one of the wealthiest countries in the world, do some have the “privilege” of being fully insured and healthy, when health care is a basic human right, not a privilege for the elitists? My heart hurts every night when the men who sleep propped up against my campaign office, huddled under their blankets against the San Francisco chill, wish me a “good night” and I can’t choke the same words back to them, or do much of anything but give them coffee to keep warm and books to read to help pass the time. My campaign office is being visited on a daily basis by Iraq war vets who can’t access the help they need to get physically or mentally healthy—and I am “extreme” because I actually want things to really change and choose to act on this desire and not sit around passively pretending that this horseshit doesn’t exist?

Since Casey died, even though every day I am filled with pain and longing, I have tried to be the poster-mom for this pain telling my neighbors and fellow Americans how it feels to be profoundly hurt by the Military Industrial Complex and that it wouldn’t be too long before the cancer of BushCo would strike every American home and now that this prediction is awfully coming true, I see more and more apathy and less and less action.

Three years ago today, I first sat in a ditch in Crawford, Texas and three years later, we are in dire straits, my friends, and the prognosis is not good, unless we all make a conscious effort to sacrifice some of today’s comfort for the sake of our children and grand-children’s futures.

Sixty-three years ago today, the monsters of the US war machine dropped a WMD on hundreds of thousands of innocent women and children and since then, this nation has just descended into a further spiral of war and profiting from war and preparing for war and more profiting from war; which is destroying every aspect of our society and we MUST reclaim our very souls from the Military Industrial Complex before it is too late.

Please don’t wait for November, or January or for the Dawning of the Age of Aquarius because every second we allow this demented pattern to continue, is one second too long!

1 Response to Cindy Sheehan : ‘This is Horseshit"