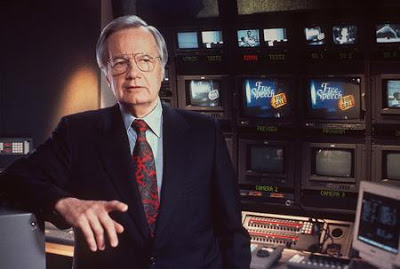 I salute our colleague, our friend, our mentor and role model, Bill Moyers, who airs his last Journal program tonight on PBS.

Throughout his long career, from his days in Texas through his stint at the Johnson White House, to his role as Publisher of Newsday, to his commentaries on CBS, to his amazing track record as documentary filmmaker and talk show host, Bill has demonstrated a range of probing intellectual interests, and a deep and unwavering commitment to democratic discourse.

He went from a being a servant of power to a critic of power, from an insider to an outsider in traditional TV terms, from the networks to public broadcasting, to become an engaged citizen-journalist and then a patron and supporter of media reform lobbying, campaign finance reform, and so much more.

He was admired by his colleagues but also tolerated by a far more centrist and often cowardly crew of comfortably sinecured public TV executives because he became an institution, one of public media’s few revered legends, in part because he was damn good on the air as an issue-raiser and, also, as a fundraiser for just about every public TV station, as well as for his own work which attracted, it seemed, unlimited foundation support and even a corporate sponsor who stayed with him over the years.

Bill knows how to work the system and the room. His southern twang, charm, and charisma has kept audiences coming back, week after week, year after year, even when he was relegated to a Friday night public affairs ghetto air slot. He resigned at age 76, but the PBS Gods used the opportunity praise him to the skies while quietly killing the excellent magazine show NOW which he created. Why? Do we really need another show hosted by a corporate editor who just turned an issue of Newsweek into an uncritical praise poem for a resurgent America?

Bill is now firmly in the pantheon of TV greats — still alive, praise the lord, and right up there with Edward R. Murrow, Cronkite and so many more.

Bill was always friendly towards me, occasionally quoting me in his speeches and emailing back and forth, but I felt he was basically uncomfortable with my more independent approach. Perhaps it was my funkier style, outspoken criticisms of the PBS system, and activist proclivities.

When my dad was dying, he sent him copies of his series on death and dying and a beautiful personal letter. It so moved him that he wrote several drafts of letters to respond but none of them were quite right or said all he wanted to say. My dad had a religious devotion to his program. It was his church and, or, schul.

Moyers and I never worked together really, even though I tried. I understood his need to cover his back and to attract guests among the high and mightier.

I wish him and his thoughtful colleague and wife, Judith, every blessing as he transitions out of the public spotlight. My hunch is he will be back in public life sooner than later. The relentless “detached” advocate may soon come out of the closet as an up-front activist.

[Danny Schechter, “The News Dissector,” has been offering a counter narrative to news and perspectives on global issues, politics, and culture since 1970 — on radio, TV and, for the last decade, on his blog. Danny edits MediaChannel.org and writes articles, commentaries, polemics, screeds, rants, and books. His latest book is Plunder: Investigating Our Economic Calamity and the Subprime Scandal.]