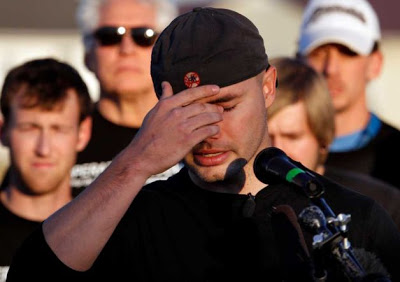 “Today we are asking for more than a moment of silence. We are demanding justice.”

This statement, published in a Veterans’ Day open letter from the Central Illinois chapter of Iraq Veterans Against the War (IVAW), reflects the spark lit in cities across the country for Veterans Day this year.

Last Thursday, anti-war veterans and their supporters marked Veterans Day with a range of coordinated events around the country. Until the 1950s, November 11th was known as Armistice Day to commemorate the end of World War I. This year, members of IVAW and their civilian allies evoked the original meaning of this holiday through building up Operation Recovery, a campaign to transition this country out of our declared “endless war” and heal some of its wounds.

Operation Recovery: End the Deployment of Traumatized Troops was launched this past October 7th, on the tenth anniversary of the Afghanistan War. It seeks to end the military’s abusive practices of deploying soldiers suffering from trauma, including Post-Traumatic Stress Disorder (PTSD), Traumatic Brain Injury (TBI), and Military Sexual Trauma (MST).

IVAW’s research estimates that approximately 20% of active duty troops are suffering from untreated trauma; many servicemembers have shared stories of being denied treatment as well as being punished and mocked for seeking it, even as military suicides continue to rise.

This campaign is one step towards IVAW’s broader goals to not only ensure the right of servicemembers to heal, but also to end the wars and occupations, deliver reparations to Iraq, and hold accountable the people who are responsible.

Picture this when you think of Veterans Day

Among this year’s Veterans Day events for Operation Recovery, Army Specialist Jeff Hanks publicly surrendered during a press conference across from Ft. Campbell, Kentucky. Spc. Hanks went AWOL to resist redeployment to Afghanistan this fall after the military refused to treat him for severe PTSD. Supported by military and civilian allies alike, Hanks and other veterans testified about the military’s negligent and often abusive treatment of even severely traumatized soldiers seeking care.

Spc. Hanks decided he wanted to turn himself in publicly to draw attention to these widespread practices. Hanks, his wife Christina, and their two young daughters are still awaiting the Army’s verdict, trying to keep up hope despite their anxiety. If he is court-martialed, he could face up to two years in prison, and a lifetime felony conviction on his record. At worst, the Army could attempt to forcibly deploy him again.

At the gates of Ft. Campbell, 25 supporters from across the Southeast stood with Jeff Hanks as he told his story to 15 news cameras. Another AWOL soldier from his unit traveled to join the rally, disclosing similar experiences. One supporter explained that her husband, who is currently deployed, was sent against medical advice. Over the last week, a number of other soldiers gone AWOL from the 101st due to mental health struggles have reached out to Operation Recovery for support.

Visibility and support are important factors that can influence the morale of traumatized troops and their families, and can also impact the military’s treatment of people who go public. Aaron Hughes of IVAW shared with supporters the fact that “Jeff’s command was extremely hostile when he turned himself in on Veterans Day, but after [Jeff was interviewed by Katie Couric in a] CBS story aired on Friday, they changed their tune.”

At the same time, Operation Rescue unfolded in other forms around the country. On the University of Illinois campus in Champaign-Urbana, IVAW members and civilian antiwar organizers publicly mounted a large display board that counted Army suicides during the past year, with 334 bold tally marks. The striking art drew veterans, students (including Iraqi-Americans), professors, and workers into conversations with the organizers.

“It felt like an important presence to have because there were so many pro-military groups, including the military themselves, who were there using the day to drum up support for the wars. We effectively inserted a different understanding of what it means to support the troops, which is to bring them home,” said Sarah Lazare from the Civilian-Soldier Alliance that helped organize the event.

In San Francisco, 50 people — from a range of veterans’ and civilian organizations — gathered to launch Operation Recovery on the West Coast. IVAW members traveled from four states across the West. Leaders visited from Coffee Strong, the G.I. Coffeehouse at Ft. Lewis, Washington, that provides critical support and community to questioning soldiers.

IVAW members explained the campaign and discussed local strategy with people from over 15 organizations and at least five cities. Thursday’s event built on the momentum of the previous Sunday’s annual Veterans Day march in San Francisco. This year kicked off a multi-year set of healing ceremonies and events led by veteran and non-veteran members of the Ohlone Nation, working alongside Veterans for Peace.

The November elections revealed a striking wall of silence around war as a campaign issue. Politicians across the spectrum seem to be finding it expedient to keep people from thinking about or discussing the wars. At the same time mainstream coverage of PTSD and other health issues for veterans has increased.

The various forms of violence that people experience in the military — and how bringing the war home effects them — have long been taboo subjects in this country. But veterans and their loved ones are refusing to stay quiet about these important issues. And the increasing visibility of this campaign is not only raising public awareness, but it is also helping to break through the isolation that so often effects traumatized servicemembers and their families.

“We’re excited to help Jeff get the help he needs, but this is not over. We intend to hold the people responsible for this accountable,” says Chantelle Bateman, a field organizer with Iraq Veterans Against the War who accompanied Spc. Hanks into Ft. Campbell as he surrendered himself.

Nobody is a bystander

This moment calls for the mass participation of veterans, their families and friends, and everyone who is looking for ways to actively reclaim this country from war. Operation Recovery offers concrete and powerful ways to involve a real grassroots movement in turning the tide. IVAW encourages veterans and their communities to contact them directly. The rest of us have a number of ways to support war resisters who are pushing back from inside the military.

Here are some ways to get involved:

It’s time to turn away from war and towards healing and rebuilding.