Classical and Futurist : This Monkey is Opera to See 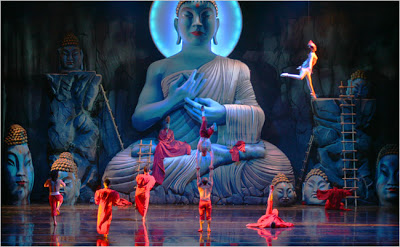 The opera “Monkey: Journey to the West” at the Spoleto Festival U.S.A. in Charleston, S.C. Photo by William Struhs / NYT.

Opera of the future???

CHARLESTON, S.C. — The opening scene is a vast cartoon, projected on a scrim, with viewers zooming past clouds and mountain peaks to an egg, which falls, bursts and gives birth to Monkey. The scrim goes up, and the cartoon dissolves into a stage full of flipping acrobats, a monkey tribe flying from bamboo pole to bamboo pole. The score pulsates with an electronic beat.

It’s not every opera that manages to fit in contortionists: “Monkey: Journey to the West” combines Eastern and Western traditions, animation and live action.

So begins “Monkey: Journey to the West,” a newfangled sort of opera that is making its American debut here at the Spoleto Festival U.S.A. Based on an old Chinese tale, it traces the Monkey King’s search for wisdom and immortality with singing, acrobatics, martial arts and cartoon segments. It is circus spectacle striving to become art — or maybe art infused with spectacle.

The show was conceived by the Chinese actor and director Chen Shi-Zheng, with music provided by Damon Albarn, the lead singer of the British pop band Blur, and design, animation and costumes by Jamie Hewlett, who collaborated with Mr. Albarn on the popular animated “cartoon band” Gorillaz.

The work is a recent example of the blending of pop strains and classical opera form, a trend seen particularly in Britain, where the English National Opera commissioned the hip-hop Asian Dub Foundation to make a work about the Libyan leader Col. Muammar el-Qaddafi.

But do not compare the Qaddafi opera with “Monkey” in front of Mr. Albarn. “I loved what they wanted to do,” he said in an interview at a hotel here, still groggy after a nap. “Great idea, but badly executed.” And never suggest “Monkey” resembles Cirque du Soleil. “No!” he said quickly. “I just don’t want to be pigeonholed.” Not exactly opera, musical theater or circus, “Monkey,” Mr. Albarn said, is a “new kind of thing.”

And it is true: most operas do not have acrobats playing crustaceans in shopping carts juggling parasols with their feet, or extended fight sequences like Hong Kong kung-fu movies, or contortionists wrapping their legs around their heads. And most circuses do not have pit orchestras, a narrative or opera singers.

The score is a mix of hip-hop beats, washes of electronic sound, dissonant brass fanfares, sweet Chinese pop melodies and percussive effects. Ten vocalists sing in Mandarin with Chinese opera inflection. There is little dialogue. The heavy amplification made it difficult to tell who was singing at times, or whether the voices were even coming from the stage.

The show was a hit when it first played, at the Manchester International Festival in England last year, and the creators have high hopes of cloning it in commercial sites and other opera houses, particularly in Asia. On Saturday night the audience was somewhat tentative, not quite sure whether to applaud after a particularly stunning circus routine. And the opera’s presence on Spoleto’s calendar did not receive a completely enthusiastic response.

“There is an incredible entertainment value of ‘Monkey,’ ” he said. “The music is an accompaniment for the visual effects. I won’t say more. People who know about these things say it’s a good score.”

But he said the fact that Spoleto was giving “Monkey” its American premiere made it a welcome addition, and it is drawing a diverse audience. “It’s doing the job we want it to do,” he said.

Its presence has also done something else: It has brought a genuine pop-culture celebrity to Charleston, someone easily recognizable to a younger crowd. (Mr. Albarn became a favorite among the college students at the gelato shop across from the theater, where he would repair to watch British soccer games.) Rarely do festival participants have musicians like Mr. Albarn, whose record sales number in the five-million-plus range.

But Mr. Albarn is taking a break from that world. Working on “Monkey,” he said, has taught him about orchestration, and he is working on another “classical” piece, which he calls a tone poem. The chance to make musical works longer than a pop song is liberating, he said.

“It’s definitely changed my course,” he said. “I love being the author of stuff now,” he said.

“I just want to keep doing things that take longer to listen to, that doesn’t just happen in three minutes.” His compositional technique involves creating demo tapes or sitting at a keyboard and playing a passage, which an orchestrator then expands upon and notates.

For “Monkey,” he said, he created a system to spin out lines of the pentatonic scale’s five notes organically. To demonstrate he drew a five-pointed star and assigned numbers to each point. The numbers stood for notes. Then he started the numbering at different points on the star, creating a sequence of numbers at each. Some passages were built from those kinds of sequences.

The production was born when Jean-Luc Choplin, director of the Théâtre du Châtelet in Paris, and Mr. Chen discussed the possibility of a new production. Mr. Chen said he had long wanted to do an opera about the Monkey story, and when the idea appeared possible, he traveled back to China as much as possible for inspiration. (He has lived in New York since leaving China in the late 1980s.) He was introduced to Mr. Albarn and Mr. Hewlett, who themselves were fans of the cult-hit “Monkey” live-action show from Japan that was on British television in the 1980s.

The men made long trips to China together. Mr. Albarn recorded sounds, and Mr. Hewlett made sketches. Mr. Chen scouted circuses and found the “very young, very hip kids” he needed in Dalian, the port city in northeast China. Most of the singers are young graduates of Chinese conservatories who studied either Chinese opera techniques or music theater singing or both.

Mr. Chen said he knew he couldn’t use Western classical music. “It’s a story children love,” he said. “The instrumentation has to be very eccentric. The monkey is like a boy. It has to be a boy’s sound.”

The characters were shaped by Mr. Hewlett’s cartoon sketches, and the opera essentially turns animated characters into live ones. Makeup for some of them takes more than two hours. Before Saturday night’s performance, the Monkey, Li Bo, sat in a chair having white and red makeup applied to his face. He got up and mugged for the mirror. Mr. Li was supposed to take on performances later in the run, but the main Monkey, Fei Yang, suffered an injury the night before: one of many mishaps because of the elaborate action, Mr. Chen said. A practitioner of Chinese medicine and a Chinese masseuse are on hand for the run.

Describing his ambitions for the show to clone itself, Mr. Chen, watching the makeup application, said, “I think we have to have a Monkey training camp.”

This entry was posted in RagBlog and tagged Arts, China, Music, Opera, Theater. Bookmark the permalink.