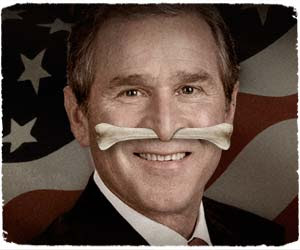 Clear Channel, the radio station and billboard powerhouse, has banned an ad for Harry Shearer’s new CD “Songs of Bushmen” because it depicts George Bush with a bone through his nose, the New York Post‘s Page Six reports:

The outdoor advertising arm of notoriously conservative Clear Channel has banned signs for “Songs of the Bushmen” because the cover depicts the president with a bone through his nose. “Their tone turned from genial salesperson to angry schoolmarm – ‘This is unacceptable,’ ” Shearer, the voice of Mr. Burns and Flanders on “The Simpsons,” told Page Six. “And it’s not like this is a dangerous time to criticize George Bush.”

Last October, Clear Channel’s Palm Beach arm refused to air an ad for VoteVets during Rush Limbaugh’s show because the ad “would conflict with the listeners who have chosen to listen to Rush Limbaugh.”

[Disclosure: The ad is running on the Huffington Post, and Harry Shearer is a regular contributor to the site.]