Climate Change : OMG. It’s Even Worse Than we Thought it was Worse Than. 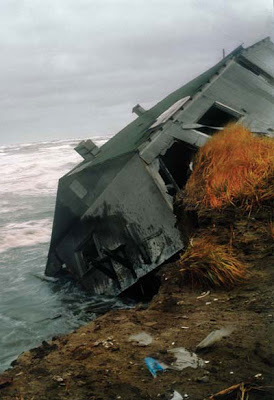 House sliding into the sea. As climate change melts the permafrost, Arctic villages slip into the sea, taking a way of life with them. Photo by Robert Knoth / Mother Jones.

The planet is now so vandalised that only total energy renewal can save us. It may be too late. But without radical action, we will be the generation that saved the banks and let the biosphere collapse.

George Bush is behaving like a furious defaulter whose home is about to be repossessed. Smashing the porcelain, ripping the doors off their hinges, he is determined that there will be nothing worth owning by the time the bastards kick him out. His midnight regulations, opening America’s wilderness to logging and mining, trashing pollution controls, tearing up conservation laws, will do almost as much damage in the last 60 days of his presidency as he achieved in the foregoing 3,000.

His backers – among them the nastiest pollutocrats in America – are calling in their favours. But this last binge of vandalism is also the Bush presidency reduced to its essentials. Destruction is not an accidental product of its ideology. Destruction is the ideology. Neoconservatism is power expressed by showing that you can reduce any part of the world to rubble.

If it is too late to prevent runaway climate change, the Bush team must carry much of the blame. His wilful trashing of the Middle Climate – the interlude of benign temperatures which allowed human civilisation to flourish – makes the mass murder he engineered in Iraq only the second of his crimes against humanity. Bush has waged his war on science with the same obtuse determination with which he has waged his war on terror.

Is it too late? To say so is to make it true. To suggest there is nothing that can be done is to ensure that nothing is done. But even a resolute optimist like me finds hope ever harder to summon. A new summary of the science published since last year’s Intergovernmental Panel report suggests that – almost a century ahead of schedule – the critical climate processes might have begun.

Just a year ago the Intergovernmental Panel warned that the Arctic’s “late-summer sea ice is projected to disappear almost completely towards the end of the 21st century … in some models.” But, as the new report by the Public Interest Research Centre (Pirc) shows, climate scientists are now predicting the end of late-summer sea ice within three to seven years. The trajectory of current melting plummets through the graphs like a meteorite falling to earth.

Forget the sodding polar bears: this is about all of us. As the ice disappears, the region becomes darker, which means that it absorbs more heat. A recent paper published in Geophysical Research Letters shows that the extra warming caused by disappearing sea ice penetrates 1,000 miles inland, covering almost the entire region of continuous permafrost. Arctic permafrost contains twice as much carbon as the entire global atmosphere. It remains safe for as long as the ground stays frozen. But the melting has begun. Methane gushers are now gassing out of some places with such force that they keep the water open in Arctic lakes through the winter.

The effects of melting permafrost are not incorporated in any global climate models. Runaway warming in the Arctic alone could flip the entire planet into a new climatic state. The Middle Climate could collapse faster and sooner than the grimmest forecasts proposed.

Barack Obama’s speech to the US climate summit last week was an astonishing development. It shows that, in this respect at least, there really is a prospect of profound political change in America. But while he described a workable plan for dealing with the problem perceived by the Earth Summit of 1992, the measures he proposes are hopelessly out of date. The science has moved on. The events the Earth Summit and the Kyoto process were supposed to have prevented are already beginning. Thanks to the wrecking tactics of Bush the elder, Clinton (and Gore) and Bush the younger, steady, sensible programmes of the kind that Obama proposes are now irrelevant. As the Pirc report suggests, the years of sabotage and procrastination have left us with only one remaining shot: a crash programme of total energy replacement.

A paper by the Tyndall Centre for Climate Change Research shows that if we are to give ourselves a roughly even chance of preventing more than two degrees of warming, global emissions from energy must peak by 2015 and decline by between 6% and 8% per year from 2020 to 2040, leading to a complete decarbonisation of the global economy soon after 2050. Even this programme would work only if some optimistic assumptions about the response of the biosphere hold true. Delivering a high chance of preventing two degrees of warming would mean cutting global emissions by more than 8% a year.

Is this possible? Is this acceptable? The Tyndall paper points out that annual emission cuts greater than 1% have “been associated only with economic recession or upheaval”. When the Soviet Union collapsed, emissions fell by some 5% a year. But you can answer these questions only by considering the alternatives. The trajectory both Barack Obama and Gordon Brown have proposed – an 80% cut by 2050 – means reducing emissions by an average of 2% a year. This programme, the figures in the Tyndall paper suggest, is likely to commit the world to at least four or five degrees of warming, which means the likely collapse of human civilisation across much of the planet. Is this acceptable?

The costs of a total energy replacement and conservation plan would be astronomical, the speed improbable. But the governments of the rich nations have already deployed a scheme like this for another purpose. A survey by the broadcasting network CNBC suggests that the US federal government has now spent $4.2 trillion in response to the financial crisis, more than the total spending on the second world war when adjusted for inflation. Do we want to be remembered as the generation that saved the banks and let the biosphere collapse?

This approach is challenged by the American thinker Sharon Astyk. In an interesting new essay, she points out that replacing the world’s energy infrastructure involves “an enormous front-load of fossil fuels”, which are required to manufacture wind turbines, electric cars, new grid connections, insulation and all the rest. This could push us past the climate tipping point. Instead, she proposes, we must ask people “to make short term, radical sacrifices”, cutting our energy consumption by 50%, with little technological assistance, in five years.

There are two problems: the first is that all previous attempts show that relying on voluntary abstinence does not work. The second is that a 10% annual cut in energy consumption while the infrastructure remains mostly unchanged means a 10% annual cut in total consumption: a deeper depression than the modern world has ever experienced. No political system – even an absolute monarchy – could survive an economic collapse on this scale.

She is right about the risks of a technological green new deal, but these are risks we have to take. Astyk’s proposals travel far into the realm of wishful thinking. Even the technological new deal I favour inhabits the distant margins of possibility.

Can we do it? Search me. Reviewing the new evidence, I have to admit that we might have left it too late. But there is another question I can answer more easily. Can we afford not to try? No, we can’t.

1 Response to Climate Change : OMG. It’s Even Worse Than we Thought it was Worse Than.