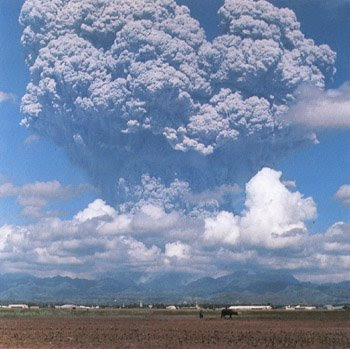 The “Pinatubo option” would involve spewing aerosol gunk into the stratosphere. Photo of Mount Pinatubo from U.S. Geological Survey publications.

Freelance atmospheric modification may sound far-fetched, but the potboiler concept was on the agenda last week at an invitation-only, international workshop in Lisbon, Portugal.

Add this to your list of climate nightmare scenarios: In 2040, facing rising seas, the Qatari government starts polluting the stratosphere in order to cool the planet, precipitating an international crisis and possibly upsetting monsoon patterns.

Freelance atmospheric modification may sound far-fetched, but the potboiler concept was on the agenda last week at an invitation-only, international workshop in Lisbon, Portugal. The private event was the first global powwow designed to explore the political aspects of geoengineering, or the deliberate manipulation of the climate. About 30 scientists and bureaucrats, representing 14 nations, mulled over the implications of global climate control in a wood-paneled conference room. The setting was the verdant grounds of an arts-and-science foundation started half a century ago by Armenian oil baron Calouste Gulbenkian.

The idea that we might solve our climate woes through planet hacking had its political coming-out earlier this month, when White House science adviser John Holdren said geoengineering research has “got to be looked at” by scientists. The work to which he was referring has quietly emerged over the last two years in a steady stream of meetings, a small but increasing number of papers, and substantial ongoing efforts by major science societies. The Lisbon meeting marked the introduction of what had once been the domain of fringe science to the international foreign-policy wonkocracy.

The first presenter, Carnegie Mellon engineer Granger Morgan, began with a review of the geoengineering options at our disposal. Employing a smiling cartoon sun to illustrate the ways radiation might be adjusted in the atmosphere, he rattled them off one by one: carbon-sucking machines, man-made jumbo algae blooms, planetary-scale sunshades to deflect solar rays, brightening clouds to reflect more sunlight. But Morgan’s main topic—and the focus for the rest of the meeting—was the concept of spewing aerosol gunk into the stratosphere, known among the geoengineering intelligentsia as the “Pinatubo option.” That Ludlum-esque moniker derives from the 1991 volcanic eruption that spewed 20 million tons of sulfur dioxide into the atmosphere, blocking out a fraction of the sun’s rays and cooling the planet by 1 degree Fahrenheit. A Pinatubo approach to geoengineering would involve the deliberate spraying of more sulfur dioxide, or an alternative aerosol, at high altitudes. It’s almost certainly the cheapest and most effective method we have for cooling the planet fast. For Morgan and the others, that’s exactly what makes it so dangerous.

Modeling studies and data from volcanoes suggest the Pinatubo option could lower global temperatures by 3 degrees or more and compensate for skyrocketing carbon pollution in a matter of months. We wouldn’t need any outlandish technology to make it work—just some jet aircraft, naval guns, or aerosol tanks. Reputable studies have suggested that the whole thing wouldn’t cost very much, either: To offset the warming caused by all current CO2 emissions would require an outlay of at most $100 billion dollars per year. That’s one-five-hundredth of the world’s GDP or one-eighth of an economic stimulus package.

“This is not at all hard to do,” Granger told the audience, declaring that “a single large nation”—especially a nuclear power, which might act with relative impunity—could easily exercise the option. A run of bad news from the climate scientists might convince a government that the breakup of the Greenland ice sheet was accelerating, and that Earth’s low-lying areas were facing an imminent rise of 3 feet or more in sea level. “If, say, a Huckabee administration suddenly woke up and started geoengineering the planet, what could anybody else do about it?” Morgan asked. (One could equally envision a left-leaning, low-lying European nation with the same inclination.) Geoengineering “turns the normal debate over climate change on its head,” he and some co-authors wrote recently in Foreign Affairs. Getting nations to agree to cut their greenhouse pollution has proved to be the ultimate free-rider problem, as the biggest nations must all cooperate or the planet will keep getting warmer. The Pinatubo option creates the opposite dilemma: As the discussions in Lisbon made clear, any of a dozen nations could change the global temperature all by itself.

The Pinatubo option could have some very unpleasant side effects, too. An Indian space scientist suggested that deploying the scheme might disrupt various monsoon cycles that provide water to hundreds of millions of people across the world. Granger’s graduate student got up afterward and warned the group that computer simulations suggest the technique might lead to a drop in global rainfall. (The aerosols would block solar energy, which drives precipitation systems. She did note that higher temperatures in a world without geoengineering might also yield drier areas.)

Whatever its specific effects, it’s easy to see how geoengineering would create confusion and sow international conflict. “If a country like the United States were to do this on their own and China [happened] to go into a decadelong drought, [the Chinese would] want to know what was the cause,” explained Ken Caldeira, a geochemist from the Carnegie Institution. “Climate science is not at the point of attributing the cause of weather events.” Not every expert at the meeting thought that the unilateral scenario was realistic, but no one downplayed the emerging strategic risk that geoengineering represents. Some mused that rich individuals or corporations—”climate pirates” perhaps?—might even issue their own “Pinatubo ultimatum.”

None of the participants were eager to geo-engineer; they’d much rather see humanity stem the problem by ending its greenhouse-gas binge. But they wonder whether it may one day become a necessity. At any rate, it’s better to explore it now, they say, so we’re as prepared as possible. Everyone at the meeting thought field tests were inevitable fairly soon.

It’s not clear how nations would go about regulating such a technology. “There aren’t very good analogies,” University of Maryland arms-control expert John Steinbruner told me. Treaties that might apply—the Weather Modification Convention, the Outer Space Treaty, the ol’ Law of the Sea—wouldn’t really cover geoengineering experiments or deployments, he said. Participants wondered whether the U.N. Security Council or a new international treaty might eventually regulate geoengineering, but to cover experiments on the shorter term, scientific societies, national science academies, or the Intergovernmental Panel on Climate Change were each proposed as possible venues for some sort of geoengineering accord.

Or is it too early to be discussing the Pinatubo option at all? Just under the surface of the Lisbon workshop lurked the ever-present worry among scientists that exploring geoengineering could dissuade the public from aggressive and expensive emissions-cutting measures—the risk of moral hazard. In a way, one might hope that the geoengineering alternative weren’t available at all, said University of Calgary physicist David Keith. He asked us to imagine one could open a box (“call it Pandora’s box”) to find out for certain whether it would work. “Which do you wish for?” If it does work, it’s going to be a colossal mess, he said. “But on the other hand, if it really serves to be a method of reducing the climate risk, and the climate risk is the essential thing. …” Later, he e-mailed me: “We should wish it works,” he wrote.

1 Response to ‘Climate Hacking’ : The Real Fear of Freelance Geoengineering