Cole: Six Mistakes After 9/11 That India Can Avoid 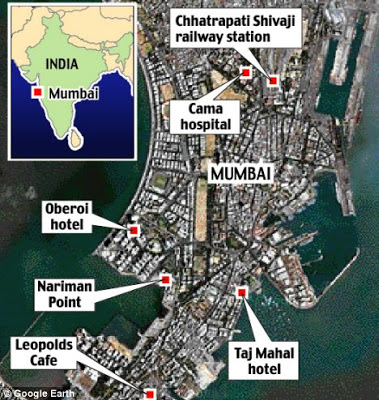 Many Indians have called the attacks in Mumbai “India’s 9/11.” As an American who lived in India, I can feel that country’s anguish over these horrific and indiscriminate acts of terror.

Most Indian observers, however, were critical in 2001 and after of how exactly the Bush administration (by which we apparently mainly mean Dick Cheney) responded to September 11. They were right, and they would do well to remember their own critique at this fateful moment.

What where the major mistakes of the United States government, and how might India avoid repeating them?

The Bush administration was convinced that 9/11 could not have been the work of a small, independent terrorist organization. They insisted that Iraq must somehow have been behind it. States are used to dealing with other states, and military and intelligence agencies are fixated on state rivals. But Bush and Cheney were wrong. We have entered an era of asymmetrical terrorism threats, in which relatively small groups can inflict substantial damage.

The Bush administration clung to its conviction of an Iraq-al-Qaeda operational cooperation despite the excellent evidence, which the FBI and CIA quickly uncovered, that the money had all come via the UAE from Pakistan and Afghanistan. There was never any money trail back to the Iraqi government. 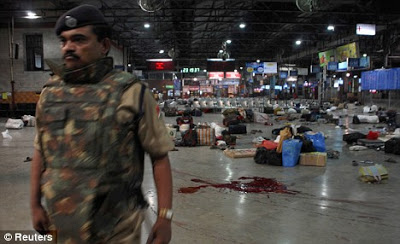 Carnage at the Mumbai train station.

Many Indian officials and much of the Indian public is falling into the Cheney fallacy. It is being argued that the terrorists fought as trained guerrillas, and implied that only a state (i.e. Pakistan) could have given them that sort of training.

But to the extent that the terrorists were professional fighters, they could have come by their training in many ways. Some might have been ex-military in Britain or Pakistan. Or they might have interned in some training camp somewhere. Some could have fought as vigilantes in Afghanistan or Iraq. They needn’t be state-backed.

2) Keep Your Eye on the Ball

Likewise, India should not allow itself to be distracted by implausible conspiracy theories about high Pakistani officials wanting to destroy the Oberoi Hotel in Mumbai. (Does that even make any sense?) Focusing on a conventional state threat alone will leave the country unprepared to meet further asymmetrical, guerrilla-style attacks.

Many Americans decided after 9/11 that since 13 of the hijackers were Saudi Wahhabis, there is something evil about Wahhabism and Saudi Arabia. But Saudi Arabia itself was attacked repeatedly by al-Qaeda in 2003-2006 and waged a major national struggle against it. You can’t tar a whole people with the brush of a few nationals that turn to terrorism.

Worse, a whole industry of Islamphobia grew up, with dedicated television programs (0’Reilly, Glen Beck), specialized sermonizers, and political hatchetmen (Giuliani). Persons born in the Middle East or Pakistan were systematically harassed at airports. And the stigmatization of Muslim Americans and Arab Americans was used as a wedge to attack liberals and leftists, as well, however illogical the juxtaposition may seem.

There is a danger in India as we speak of mob action against Muslims, which will ineluctably drag the country into communal violence. The terrorists that attacked Mumbai were not Muslims in any meaningful sense of the word. They were cultists. Some of them brought stocks of alcohol for the siege they knew they would provoke. They were not pious.

They killed and wounded Muslims along with other kinds of Indians.

Muslims in general must not be punished for the actions of a handful of unbalanced fanatics. Down that road lies the end of civilization. It should be remembered that Hindu extremists have killed 100 Christians in eastern India in recent weeks. But that would be no excuse for a Christian crusade against Hindus or Hinduism.

Likewise, Prime Minister Manmohan Singh, as a Sikh, will remember the dark days when PM Indira Gandhi was assassinated by her Sikh bodyguards after she had sent the Indian security forces into the Golden Temple, and the mob attacks on Sikhs in Delhi that took place in the aftermath. Blaming all Sikhs for the actions of a few was wrong then. It would be wrong now if applied to Muslims.

The 9/11 hijackings exploited three simple flaws in airline security of a procedural sort. Cockpit doors were not though to need strengthening. It was assumed that hijackers could not fly planes. And no one expected hijackers to kill themselves. Once those assumptions are no longer made, security is already much better. Likewise, the Mumbai terrorists exploited flaws in coastal, urban and hotel security, which need to be addressed.

But Bush and Cheney hardly contented themselves with counter-terrorism measures. They dropped a thousand-page “p.a.t.r.i.o.t. act” on Congress one night and insisted they vote on it the next day. They created outlaw spaces like Guantanamo and engaged in torture (or encouraged allies to torture for them). They railroaded innocent people. They deeply damaged American democracy.

India’s own democracy has all along been fragile. I actually travelled in India in summer of 1976 when Indira Gandhi had declared “Emergency,” i.e., had suspended civil liberties and democracy (the only such period in Indian history since 1947). India’s leadership must not allow a handful of terrorists to push the country into another Emergency. It is not always possible for lapsed democracies to recover their liberties once they are undermined.

The Bush administration fought two major wars in the aftermath of 9/11 but was never able to kill or capture the top al-Qaeda leadership. Conventional warfare did not actually destroy the Taliban, who later experienced a resurgence. The attack on Iraq destabilized the eastern stretches of the Middle East, which will be fragile and will face the threat of further wars for some time to come.

War with Pakistan over the Mumbai attacks would be a huge error. President Asaf Ali Zardari and Prime Minister Yousuf Raza Gilani certainly did not have anything to do with those attacks. Indeed, the bombing of the Islamabad Marriott, which was intended to kill them, was done by exactly the same sort of people as attacked Mumbai. Nor was Chief of Staff Ashfaq Kiyani involved. Is it possible that a military cell under Gen. Pervez Musharraf trained Lashkar-e Tayiba terrorists for attacks in Kashmir, and then some of the LET went rogue and decided to hit Mumbai instead? Yes. But to interpret such a thing as a Pakistan government operation would be incorrect.

With a new civilian government, headed by politicians who have themselves suffered from Muslim extremism and terrorism, Pakistan could be an increasingly important security partner for India. Allowing past enmities to derail these potentialities for detente would be most unwise.

6) Don’t Swing to the Right

The American public, traumatized by 9/11 and misled by propaganda from corporate media, swung right. Instead of rebuking Bush and Cheney for their sins against the Republic, for their illegal war on Iraq, for their gutting of the Bill of Rights, for their Orwellian techniques of governance, the public gave them another 4 years in 2004. This Himalayan error of judgment allowed Bush and Cheney to go on, like giant termites, undermining the economic and legal foundations of American values and prosperity.

The fundamentalist, right-wing Hindu Bharatiya Janata Party, which has extensive links with Hindu extremist groups, is already attacking the secular, left-of-center Congress Party for allegedly being soft on Muslim terrorism. The BJP almost dragged India into a nuclear war with Pakistan in 2002, and it seeded RSS extremists in the civil bureaucracy, and for the Indian public to return it to power now would risk further geopolitical and domestic tensions.

India may well become a global superpower during the coming century. The choices it makes now on how it will deal with this threat of terrorism will help determine what kind of country it will be, and what kind of global impact it will have. While it may be hypocritical of an American to hope that New Delhi deals with its crisis better than we did, it bespeaks my confidence in the country that I believe it can.

This entry was posted in RagBlog and tagged 9/11, India, Terrorism, War on Terror. Bookmark the permalink.